I once did a column about chickens. But all livestock have benefits to a garden. Most obviously, they all produce manure, which is one of the best sources of organic matter and fertilizer.

All manure, however, is not equal. Sources I’ve seen say you should not compost dog or cat manure as there is potential for pathogen transfer. So they are not included in what I’m calling “livestock.”

Others come in basically two categories. Chicken manure is known as a “hot” manure—you need to compost it for at least six months before use. You can integrate it with other compost, or compost it alone. No doubt this is true of the other poultry too—ducks, turkeys, guineas and geese. Horse, cow and pig manure also need a long period of breakdown.

The other category includes sheep, goats, llamas and rabbits. Their manure can be used right away—or perhaps to be entirely safe, after six weeks’ composting. This I don’t understand, because while all sources I’ve looked at agree that this is so, they also say these manures are richer in nutrients than the horse, cow and even chicken manure. So shouldn’t they be hotter? I thought “hot” basically meant “high in nitrogen.” But no matter; whatever kind of manure you can get your hands on, it’s all good.

The next obvious thing these animals are good for is directly feeding us—milk, eggs or meat. This high protein, high fat food complements the plants you grow in your garden. I like chickens because they’re easy; they require much less investment in money and time compared to bigger animals. You don’t have to have a relationship with a vet; when my chickens die mysteriously I just bury them in the orchard. Unlike dairy animals, you don’t have to load them into a truck and take them somewhere for breeding. If you want chicks, you just keep a rooster among your hens, and if you don’t, you don’t even necessarily have to have a rooster.

Different animals perform other useful functions. Horses, of course, provide transportation and traction for plowing or logging and other farm functions. Many people like them as pets. Chickens turn your compost for you and eliminate pest bugs (along with some useful bugs, especially earthworms). Roosters provide an alarm clock function—especially useful if you want to be awakened at two and four in the morning as well as at dawn (I just sleep right through it). Pigs plow up your ground with their rooting. Goats eliminate weeds, including thorny and nasty things like autumn olive, multiflora and poison ivy. Sheep and some goats and rabbits provide wool. All of them are an alternative to the compost pile in making use of food waste.

And then there are the less tangible services. For example, the yard ornament function. Most species are good for this, and it may be a reason to choose breeds with an eye to aesthetics. Some animals make good companions, though few can compete with dogs and even cats in this regard—for one thing, you probably don’t want to let them in your house. Nor do you want to spend long hours in the barn or coop, discussing the weather with the sheep or unburdening yourself to the ducks…who likely won’t give a quack.

Finally, all animals are a source of amusement. Long ago, when I went up the holler to visit Ted and Sarah, I’d tell them the latest goings-on with my chickens; Sarah referred to this as “chicken gossip.” It’s remarkable how much chicken gossip there is, passed on to my current neighbors, or even exchanged with my husband. If he locks up the chickens at night, he tells me who’s in the trees; if he’s been away I tell him about the latest predator scare.

Recently I’ve been talking about the incident in which my husband and I were trying to move a hen and her three chicks from a night nest in the bushes—only about five feet up, not safe—into the coop. We got the mama and one chick in the coop, and were looking for the other two in the dusk light, when we realized our dog was with us and was also hunting the chicks. Usually she knows she isn’t allowed to chase chickens, and she defends them from predators, but she grabbed one chick, and we chased her in circles around the orchard screaming. Finally I caught her tail, we wrenched her mouth open and extracted the chick, and my husband put it in the coop while I dragged the dog to the house, telling her what a bad dog she was. It took ten minutes to spot the third chicken. Here’s the punchline—the chick that spent two minutes in Mocha’s mouth as she ran around the orchard is fine, completely unharmed. 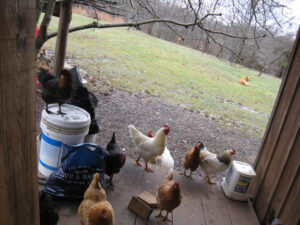