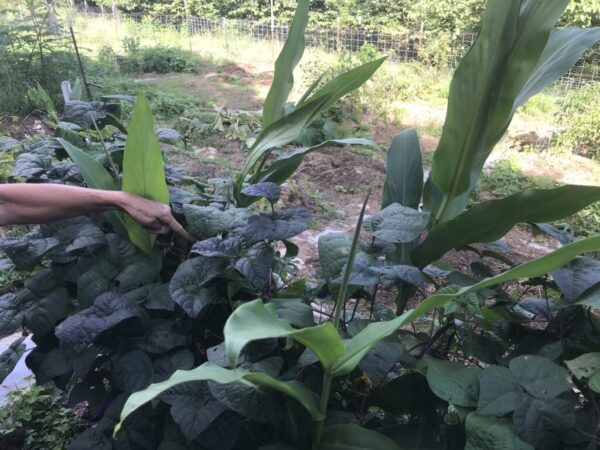 This week we’re going to look at some crops in which the edible part of the plant is the seed. Sometimes it’s a challenge to get the seed out of the pod or husk; methods people have come up with to accomplish this on a small farm scale are called threshing and winnowing.

Threshing often involves flailing the crop—that is, beating it with a flail while it is parked on a clean surface. This breaks up the pods, assuming they are mature and dry, and thus brittle, releasing the seed. Nowadays, for farm sized operations there are machines that clean seed. But I assume none of my readers are in that category.

Once threshing is accomplished, you need to separate the seed from the chaff—the bits of pod and perhaps leaf or other matter. This is accomplished by winnowing, done on the garden or homestead scale by pouring the seeds and chaff from one vessel to another in a wind. The seeds, being heavier than the chaff, fall into the second vessel on the ground, while the lighter chaff blows on beyond the vessel. Nowadays it’s easier to do this with a fan, as wind speed is variable. I use a box fan and do the deed on my porch, experimenting to find the ideal fan speed and distance from it. You have to do this several times, with your seed getting cleaner each pass as more chaff blows away. But this is the easy part, something I’ve successfully accomplished in a few minutes many times.

I haven’t done so well with threshing. For some things, I just tediously break open the pods and pick out the beans or peanuts or even grains by hand; for a small crop this is feasible. My neighbor likes to watch movies while shelling beans. Listening to music is another way to make the chore more pleasant. And unless you have a major crops of beans (and blackeyed peas and peanuts are beans of a sort, which work the same), this is the easiest way to discard the shells; winnowing will not be necessary. For a large crop, threshing the pods (say on a clean tarp on a floor) and then winnowing the resulting mess would be easier.

I have yet to find a way to shell sunflowers, to grow a crop for human use (we do eat sunflower seeds, mostly in granola and breads) but I grow them anyway for my chickens. I rarely use commercial feed; my chickens are free range and get much of their own food, but they get cracked corn all year, supplemented especially in the winter with sunflower seed (corn is not high enough in protein). And they can do their own threshing, so you can give them various grain crops without bothering with that: sorghum seeds, sunflower seeds, grains like oats, wheat, rye, or buckwheat.

My current challenge is one of this year’s experimental crops, which I told you awhile back I’d report on: sesame. Despite a couple of mistakes, the nine plants did yield a decent amount of pods. But sesame seeds are locked inside four tight, narrow tubes in each pod. At complete maturity these pods may open at the tip and release the seeds and this is no doubt the origin of that phrase “open sesame”…or so the advice I’ve found online says, but I now think it comes from frustrated growers, hands on hips, wondering how to get the delicious seeds out of the stubborn pods, fantasizing about magically commanding the pods to open. 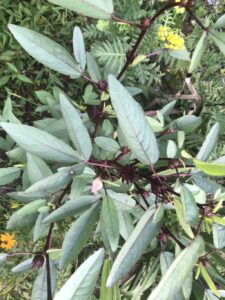 I tried toasting the pods in the oven, to make them brittle (I should try that with the sunflowers), and then put them in a very heavy and large plastic bag that five pounds of coffee beans came in. I tried walking on this, tried just mashing the pods around by hand, and some seeds leaked out but there is also a lot of fine…dirt? Bits of plant matter? An online video I watched showed women pouring the stuff through strainers and ending up with big bowls of clean seed. But I don’t have appropriate strainers… I may end up donating the whole mess to my chickens, who don’t mind eating a lot of chaff with their seed.

I harvested the calices from my roselle plants, and saved a few of the seedpods from the inside. Leaving these on a sunny windowsill caused them to dry out and pop open, so it’s easy to get the seeds out. Open sesame! I read that you can grind roselle seeds into flour, or roast them for a coffee substitute, but I have no intention of such a thing—I’d need to plant my whole acre in roselle to get enough seeds to supply a cup of dubious coffee per day—let alone the three or four cups we actually drink. No, I just wanted a few seeds for next year’s plants. 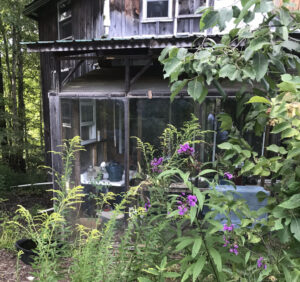