I did a column on cucurbits once before, hence the title of this second take on the same subject.

Cucurbitacea include summer squash, zucchini, pumpkins, winter squash…and watermelons, other melons and cucumbers. I’m not going to talk about the last of these today because I don’t like or grow cucumbers and while I sometimes grow melons I often get no crop and don’t care too much (they’re not high on my list of must-have produce).

So actually—we’re just talking today about squash. For clarity: zucchini is one variety of summer squash, and pumpkins are just whichever winter squash have been labeled “pumpkins” without a clear separation. For more clarity and especially for seed savers, I am now going to draw you into the deep waters—of Latin names, yikes!

Most summer squash and many pumpkins are Cucurbita pepo. Butternuts and many other winter squash are Cucurbita moschata. Hubbards and some other winter squash are cucurbita maxima. The cushaws are Cucurbita mixta. Why should you care? Well, if you want to save seed, you likely don’t want different varieties to cross. Most sources say the different species won’t cross. So you can grow, say, a yellow crookneck summer squash (C. pepo) and Waltham butternuts (C. moschata) in the same garden and save seeds from one or both. Squash seeds, properly dried and stored, will keep up to six years—even longer in a freezer. A single fruit has a lot of seeds. And unlike with some other veggies, it isn’t necessary to have several squash plants for adequate genetic variability—even one plant is okay. So this is a good choice for seed saving.

For a summer squash, you have to let a fruit get much bigger and more mature than you would for eating, and that may discourage further fruiting (as is true of beans, peas, peppers…you have to keep them picked, to keep them flowering). But if you have several plants, you probably have more fruit than you want anyway. Just lay the seeds out on a dry paper towel or sheet of newspaper till fully dry, then store in a sealed container (labeled—don’t forget the label!) Winter squashes have mature seeds at the same stage you want them for eating, so you don’t have to necessarily choose your seed plant or fruit until they are close to mature. As with any seed saving project, choose only disease-free specimens without defects.

All squash are pretty easy to grow—they want fertile soil, full sun, and plenty of water. Yeah, just like everyone else. Given those basic requirements, most squash will produce long vines and plenty of fruit. But here’s another place the species come in—the moschata kinds don’t do well in places with inadequate summer heat…never a problem here—but they resist borers which often are a problem here, especially in low places and wet years. Maximas can be destroyed by borers. Mixtas also resist borers, but cushaws are such large squash, they can be hard to use. Hence—butternuts are my standby. I have tried many other kinds, looking for variety in color or shape or flavor, but the butternuts always seem to outperform anything else.

All squash are bothered by squash bugs, which will make an appearance pretty much every year. You about have to look under every leaf for the grey or black bugs, the pale nymphs, or the orange egg clusters—squish or remove and burn these. Then dispose of the spent plants and mulch in a way that eliminates the bug problem for next year—I spread them where my chickens can go through them but you can also reuse the mulch for something else, far from your garden or where you will grow squash next year.

Two diseases are occasional problems—cucumber mosaic virus, which is spread by cucumber beetles, and powdery mildew, a fungus which typically comes around to bother squash plants in September. CMV can kill plants but fortunately is not common. Powdery mildew is common but usually arrives when the season is winding down anyway and doesn’t do that much harm.

It’s a good idea to plant a second hill of summer squash a month or two after the first, to take over when the first planting is old, tired, bug-eaten and looking into retirement. I have failed the past two years, either because my seed was too old or because it was too dry. But sometimes this is a good way of keeping vigorous, productive plants going. Winter squash need the whole growing season; the main thing with these is to avoid planting them near your garden entrance, as their vines can grow fifteen feet long and you don’t want to step over or between or—dang it—on them every time you enter the garden.

Summer squash are picked young and usually lightly steamed or fried; they can be sliced and frozen for winter use. Winter squash will keep for months just sitting on a shelf in a cool, dark, dry place. They are said to be tastier roasted—put them cut side down on a cookie sheet. I often roast one, or a sweet potato, while I have the oven going for something else. 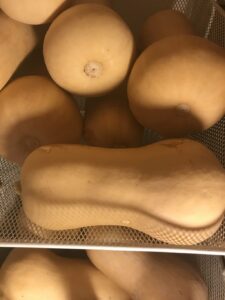