Permaculture is an approach to gardening, farm layout—and life—started by two Australians, David Holmgren and Bill Mollison. There is at least one book on permaculture in the Spencer library, so you can delve deeper into these ideas; here I’m just going to give you a first taste of what it’s about. I also want to mention permies.com, a website where you can find discussions of every imaginable homesteading question. I have incorporated some permaculture ideas on my own homestead.

One of these ideas is to spend time observing your space, and contemplating the best way to arrange things, rather than rushing in and just doing it…only to realize, later, that you’ve put things in the wrong places. Another is do follow nature’s example, and to choose permanent, perennial plantings rather than all annuals. I’ve seen a whole book on perennial vegetables—but the truth is, for vegetables the pickings for perennials are rather thin. A sunny garden full of annuals puts food on the table. However, you can also have an orchard, and a few perennial things like rhubarb and asparagus in your garden, that are perennial…also many herbs. Most fruits are perennial; not only orchard trees but all the berry bushes and even strawberries.

In layout, your objective is to minimize work and ideally “stack functions,” meaning find ways that one element accomplishes more than one chore. One example of how I used this was putting my chicken coop near but above my garden. That way I drag the manure and bedding a short way downhill to incorporate it into my compost piles, which are above my garden so that any nutrients leaching out are going into the garden. Water is key to permaculture, but some of those ideas I consider irrelevant here as we generally have plenty of rain and don’t need to maximize every drop; but taking gravity into account in your planning might save you from lugging buckets uphill.

Permaculture advises you to make a plan on paper, with zones: your house and the area right around it are Zone One, the nearby area is Zone Two, etc. You put things you use all the time, or that need tending frequently, near the house. The outermost zone around here will be woods. Here you may have mushroom logs, persimmon, pawpaw or hickory trees, and firewood. Your vegetable garden will be in Zone Two or Three. Pastures will be farther out.

One thing I’ve tried that comes from permaculture is making hugelkultur—that’s a German word, and Permaculture didn’t invent this technique but has promulgated it. The idea is that you bury rotting logs in your raised bed, and they release moisture and nutrients very slowly—so you don’t have to water after the first year. Here’s how I did it: first I dug a space about a foot deep, about three feet wide and eight feet long, and set the topsoil with turf in one pile and the deeper soil in another. Then I filled the bottom with sizable, half rotten logs and branches from the woods. Next I covered this with a layer of the soil, turf down. I also added compost, and perhaps sand or manure; then I filled in the crevices with smaller pieces of wood. I covered it all with the rest of the soil, so the whole thing stood a foot or more above ground level.

I tried this in my orchard first, with elderberries. The ones I transplanted into the hugelkultur bed soon were obviously greener and faster growing than the others, so I figured it worked. But the deer were relentless in attacking my elderberries—since they never thrived here on the ridge anyway I gave up on elderberries. Meanwhile I had a blueberry bed that never did well, probably because I rimmed it with concrete blocks, which perhaps leach lime. Blueberries demand an extremely acid soil. So I decided to make a new bed for my four blueberries, near the house adjacent to my flowerbed. I dug out a square hugelkultur bed, then fenced it with metal posts in the corners and one-inch-mesh poultry netting (which I’m happy to report, does keep birds out. When the berries are in season I drape some plastic bird netting over the top.) And the blueberries are doing much better…although this may be because someone told me to throw my coffee grounds in there. Coffee grounds are rich in nitrogen, and acidic. It isn’t good to fertilize in autumn or winter but I start tossing my grounds in the blueberry bed in late February.

So I have concluded that hugelkultur does work, at least for berry bushes. The one downside is that it’s a bit tricky walking in there because of the uneven ground. This wouldn’t matter with a narrow, non enclosed bed, which I wouldn’t be walking on.

By the way, perhaps I should apologize for getting you fired up about tapping maples in what has been a terrible year for it. Maple sap flows when temperatures go below freezing at night and shoot up in the daytime. We’ve had entire weeks that stay below freezing, and others where it never goes below. Snow and ice also make for bad footing going from tree to tree. So we decided to skip this year—but we have several pints of maple syrup left from last year. Don’t give up on tapping maples because of this year! 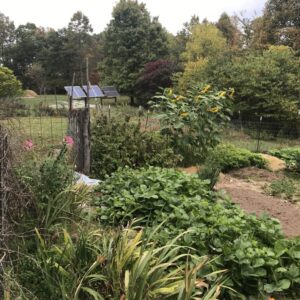