Do you want to grow your garden in ways that don’t deplete the soil or pollute the water or air? To improve the fertility of your soil without impoverishing some other place? If you are a gardener who cares about the environment, this column is for you.

First, let’s note an entry in the positive column: Everything you grow for yourself is something you don’t have to buy, thus contributing to environmental harms of unknown commercial growers. So your gardening is potentially a green activity. But there are good and bad ways to do things and that’s what this column is about.

Most obviously, spraying your crops with poisons is bad. It may accomplish the intended purpose, of killing whatever bug or microbe is currently harming your crop. But these chemicals tend to pass on, from the target pests to bugs who are doing you no harm—innocent bystanders, standing on their six innocent feet, or the predators trying to get rid of the pest bugs. Pesticides can also harm birds that eat either the “good” bugs or the “bad” ones (as well as toads, snakes, etc.). Poison may get into the nearest creek, and harm all the life there, all those isopods and benthic organisms and such (no, I don’t know what isopods or benthic organisms are either, but I’m sure I don’t want to hurt them). Meanwhile, you sprayed the poison right on your food crop! So you’ve definitely poisoned yourself. Herbicide may be a convenience but is harmful to many plants including your garden crops, and often to animals including us.

And then there’s the long run. When you use a poison to eliminate a pest, you act as an agent of natural selection (or arguably of unnatural selection). Those few individuals among the pest population with the ability to resist the poison will be the parents of the next generation, and likely pass on that resistance trait. Eventually it takes much more potent, or different poisons, to control a pest. This is why farmers spray many times more poisons than they once did, and lose about the same percentage of the crop as they did before this treadmill started in the 1930s.

If, on the other hand, you don’t use poisons, then the creatures whose job description includes eating that pest remain unharmed—and most of the time they will bring the situation into balance.

Speaking of ecological balance, another thing to avoid is mowing your entire property. If you have areas where wildflowers grow (the word “wildflower” sounds so much prettier than “weed,” doesn’t it?) you foster a healthy ecosystem in which the predator bugs have something to eat and somewhere to hang out when the pests are not around. You also provide habitat for pollinators—not only honeybees but all sorts of wild bees and wasps and butterflies—even hummingbirds do some pollinating. You can find lists online of good plants for pollinators, and many catalogs include symbols indicating these. The good news is that many good choices are ornamental, or useful as herbs. You don’t have to give anything space just for pollination purposes.

Along with avoiding the use of poisons, it’s also best to avoid chemical fertilizer. It’s formulated to deliver large amounts of the three most important plant nutrients, the NPK (nitrogen, phosphorus and potash) rapidly—but plants need 17 nutrients, and if you feed your soil plenty of organic matter they will likely find all of them. I’ve seen claims that chemical fertilizer harms soil organisms, and it often washes into waterways where it causes algae blooms and dead zones in the ocean. Instead, give your plants manure, compost or leaf mold. Humans often look askance at manure, referring to it with a four-letter word—but I assure you the people in green, the ones with roots instead of feet, love manure. They also adore compost, can’t get enough of it. And leaf mold fills them with contentment.

Finally, just as you avoid excess plastic in the kitchen—especially single-use items—don’t causally use it in the garden. The recycling center in Spencer has a contract for all kinds of plastic but this is rare and likely won’t last forever. As with food-related plastic, reusing items gets a lot more good out of the equation before you have to deal with disposal. Incineration is toxic to people downwind, recycling usually doesn’t actually happen (and is also something you don’t want to live near) and plastic fills up landfills… or ends up in the ocean. There it damages wildlife over and over, for centuries, as it does not break down but just breaks up, into smaller and smaller bits. It’s been found in the Arctic, in high mountains, inside human bodies. Therefore I don’t endorse plastic as a mulch. Those little pots that seedlings come in can be washed and used over and over, as can buckets and such. Row cover can be reused but not too many times before it shreds and gets dirty. One way to minimize the volume of plastic trash is to stuff it inside another piece of trash like a bottle or box.

Avoiding wasteful water use is an important principle of green gardening in many places, but around here we usually have plenty of rain. However, the use of mulch, and keeping your ground covered all the time by using ground covers in winter, help keep your soil moist and healthy. It’s those tiny organisms that exist by the billions in every shovelful of soil, that keep the whole ecosystem going, that keep your plants healthy and productive, ready to pay you back in the coin of fruits and vegetables… fresh, local, organic produce you raised yourself. 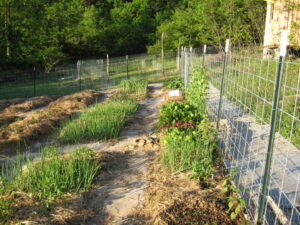