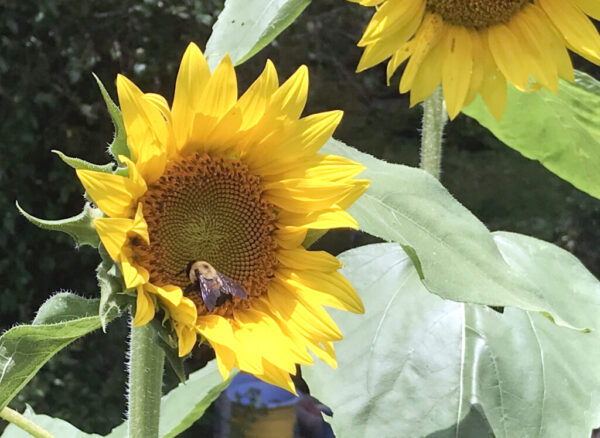 This week we’re going to look at some plants that tower over others in your vegetable garden: sunflowers, sorghum, and field corn.

Sunflowers are fun and fairly easy to grow; children especially enjoy growing them. They aren’t terribly picky about soil but want full sun. Sunflowers can shoot up to ten feet or more in a few months, and make heads a foot across or more, carrying hundreds of seeds rich in protein and fat. I’m referring to the ones with names like Mammoth, Black Oilseed and Giant Grey Stripe, which make one big head on a tall, stout stalk. There are also ornamental varieties, which may make several smaller heads and are usually about five feet tall. These come in various shades of yellow, gold, burgundy, and bronze. Their seeds are of interest to birds, but they don’t make nearly as many, and the seeds are much smaller. Sunflowers have a cheerful aspect and a pleasant fragrance. A downside is that they often lean by the end of the season, usually in the direction of the most sun, and may get in the way of other crops.

I use sunflower seeds as chicken food, their high protein complementing cracked corn which is rich in carbohydrates but not in protein. I would use them in the kitchen as well—I put sunflower seeds in bread, in granola, and occasionally in stir-fries—but I haven’t found a practical way to shell all those seeds. If you know of one, please comment below.

I also grow field corn most years, mainly for my chickens. I can buy cracked corn cheaply but I’d rather avoid the GMOs and pesticides, so I supplement with homegrown. Some favorites are Bloody Butcher, which grows to about ten feet and has beautiful, multi-tone red ears. That one has a long season. Green Oaxacan features equally beautiful but smaller green ears, on seven foot stalks in a shorter season. Another is Blue Clarage, which originated around here somewhere and is in blue and purple shades. I have successfully saved seed from the red and green kinds; but it’s necessary to grow only one variety if they’ll cross. Corn also requires a sampling from at least 20 plants—if you take all your seed from your best plant, its quality will decline rapidly.

Corn requires rich soil and full sun, and it needs to be grown in blocks rather than one or two long rows, for good pollination, as it uses wind rather than insects. This is not only for seed saving; without pollination the ears won’t fill out with kernels. Field corn is left until it turns a dull dry tan color, and the kernels are very hard. It should not be grown near the super-sweet varieties; its pollen will ruin them.

Sorghum is grown much like corn, which it strongly resembles through much of its life. But while corn makes a tassel on top and ears lower down, sorghum makes a big plume of seed on top. When these are turning from a golden green to a deep red, they’re quite beautiful.

Sorghum is grown like corn but is less picky about soil and does well in drought conditions. There are at least three kinds: grain sorghum, which is only a few feet tall and presumably makes bigger heads of seed; cane sorghum, which is nine to fourteen feet tall and does make a seed head on top but also yields sweet juice in the canes; and broom corn, which is used to make those rustic brooms you see at craft fairs. The only kind I’ve grown is the cane kind—I get nice heads of grain from these, for chicken food or for grinding into a gluten-free flour, but I also get canes that can be squeezed to yield sweet sap, which can then be boiled into syrup. There is a catch: if you can’t find a mill, there is no method for squeezing out the sap on a homestead basis that I know of.

We also tap maple trees and boil down the sap into syrup. That process starts with tapping the trees in February (when I’m least busy), whereas the sorghum requires a whole season of growing the plants, then stripping off the leaves and cutting the heads off (I spread them in my greenhouse to dry). Then we take the cane to someone who lets us use their mill, resulting in a thick, cloudy green sap. It’s extra important with sorghum to skim off the foam for good sorghum syrup—but while you have to boil off 40 gallons of water to end up with a gallon of maple syrup, you only need to get rid of about nine for a gallon of sorghum. The resulting syrup has a more complex flavor than maple syrup—to me it tastes like it’s full of minerals.

One more downside of sorghum is that the stumps are really tough, hard to get out of the ground. But I’ve found that if I wait till spring, they’ve weathered and weakened, and a couple of strikes with a mattock will pry up the roots. Corn stalks can be knocked down in the fall, then picked up and knocked down in the opposite direction, and that generally breaks enough roots to pull up the stalk, leaving tillable ground. I clip corn and sunflower stalks into one-foot sections—this makes turning the compost piles much easier. 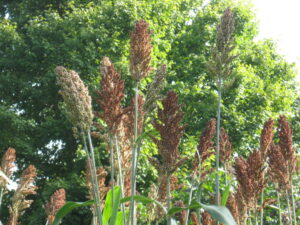