This is a follow-up to a column I did called Scientist in the Garden, the scientist being you. It was about testing different crops, varieties or techniques to see what works best, and how to make such tests more scientific. I mentioned that I was testing the idea of not tilling or working my soil prior to planting, in an onion bed. I divided the bed into quarters and worked up the soil in two opposite quarters, to hopefully avoid any confounding factor if one end or one side is better soil than the other.

I believe that’s what a confound is—some other element than the factor you’re testing for, in this case working the soil, that may influence the outcome you’re measuring, in the case the size of the onion crop.

Someone recently reminded me that I need to report to you, my readers, on this experiment—and it’s time to dig the last of my onions anyway, so…

So I did, and put the onions from each quarter in separate piles. I did run into one difficulty aside from potential confounds, in that the butterfly weed establishment on one end of the bed appears to be harboring a yellow jacket nest. Guess how I discovered this?

Results: the bucket from the two unworked quadrants came in at 8.5 pounds, and the one from the worked quarters came in at 11.1 pounds. So this means it does pay off to work amendments into the soil and fluff it up, right? Well, maybe—but in such a small-scale test I can’t eliminate confounds, like—I didn’t have a clear dividing line between quadrants, just used an elephant garlic plant that overwintered in the middle of the bed as the divider. But there was a line of onions down the middle of the bed that could have gone to either side—so I tossed every other one to each side. One end of the bed had that big butterfly weed clump, and the other had the softest soil (which yielded the biggest onions). Those elements don’t really count as a confound since each end was divided down the middle; this also applies to the question of whether exposure to morning versus afternoon sun mattered. But there’s no guarantee that my quadrants were equal in size or condition.

Conclusion: it takes more than one test to be fairly sure you’re looking at reliable results. I find that a given crop or variety that does well, or has a particular problem, or… whatever I may want to say about it after growing it one year, doesn’t necessarily prove out the next time I grow it. There are so many factors—even the weather isn’t a simple question, as dryness at one point in the growing season may not have the same effect as dryness at a different time.

I do want to give a preliminary report on something else: because I have so much trouble with tomato disease (Early, Late and Septoria blights), I keep trying varieties for which resistance to these diseases is claimed. Usually they’re little if any better than other varieties. This year I tried one called Defiant, a hybrid whose seeds were pretty pricey, and—it actually does seem to be fending off the leaf diseases well. Not only that but I already have ripe tomatoes from it, just a day or two after the first one from Glacier, which I grow one plant of every year just because it’s early. So a tentative thumbs up to Defiant—but we’ll see how it weathers the rest of the summer. In fact the diseases have been slow to start this year, perhaps because I have been fairly diligent about pruning off lower leaves and any that show disease. The most affected so far, including some suspicious wilting, seem to be Pink Berkeley Tie-Dye, my definite favorite for flavor (whereas Defiant is nothing to write home about, it stays firm, seeming under ripe even when red—I guess I should wait till it’s a deep red to pick).

Last year I had trouble with pepper disease, probably Bacterial Leaf Spot. It got into all my peppers but the hot peppers still managed to produce, the habaneros nearly unaffected. I’m pleased to report that this year my peppers are fine. But my basil got hit with a mildew, which I’ve never seen before; however, they have recovered. There is always the question of whether to be safe and sorry, and pull a diseased plant of a desired type so as to protect others. Will I regret not removing the Berkeley Tie-Dyes?

Another item is celery; once again my plants got a curly top disease, perhaps Aster Yellows, so I keep yanking them. But clearly not in time to prevent spread. They have grown faster than usual this year, though, so I’m getting a good harvest. But this is my fault, as I could have put row cover over the celery; it’s not like they have flowers that need attention from the bees. I thought of it but didn’t get around to it. But I did put some over my melon patches after I replanted because some small bugs keep eating the baby seedlings. You can buy Reemay or other row cover from seed companies, or just buy tulle at WalMart. 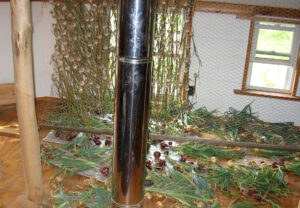