Climate Reality Project: Ethane Cracker Plants: What Are They?

Fact Sheet: Who Really Stands to Profit from the Appalachian Storage Hub/Petrochemical Complex?

It’s Not a Done Deal: Say “No!” to Appalachian Storage Hub – Part 1

Petrochemical Complex Not Good for WV

A Field Guide to the Petrochemical and Plastics Industry

Plastic & Health: The Hidden Costs of a Plastic Planet

How Fracking Supports the Plastic Industry

We Are Drowning In Plastic, and Fracking Companies Are Profiting

The Appalachian Storage Hub (ASH), also known as the Appalachian Storage and Trading Hub, is a proposed mega-infrastructure project which could greatly expand unconventional oil and gas drilling (fracking) in our state and region. If built, this petrochemical complex would include five or more cracker plants, and regulating stations. Various natural gas liquids would be stored in underground storage facilities and transported via up to six major possible pipelines. The petrochemical complex would roughly follow the course of the Upper and Lower Ohio River Valleys. Currently, it is uncertain whether most of the infrastructure would be located on the Ohio side or the West Virginia side of the river. It would cost billions of dollars to construct. 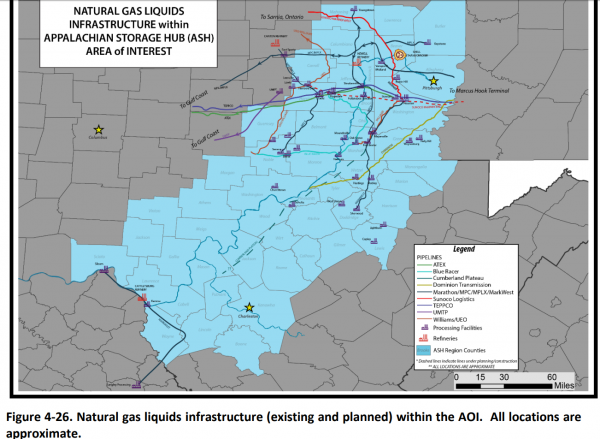 Size and Area of Impact: Initial industry reports have described this project as extending along the Ohio River from Beaver, PA to Huntington, WV/Catlettsburg, KY, with a spur extending from Pt. Pleasant, WV into Kanawha County, WV.

May 25 2021  Hoots and Hollers
To President Joe Biden From West Virginians
Hoots & Hollers, the OVEC Blog © 2014 Frontier Theme
Send this to a friend