I believe in preserving any good harvest, even if there is far more than you’ll use in the next year. You never know when you’ll have a crop failure, even several years running of crop failure. I’m glad I canned 25 quarts of applesauce a few years ago, because we still haven’t solved the squirrel problem and have not had a harvest since. I’m glad I made a whole lot of salsa one year as I didn’t can much last year.

But what if you don’t have enough of any one thing to make a decent batch of canned or frozen goods? Well, with a freezer you can always freeze a small amount and add to the bag or container later. But it may not be worth running the canner for a jar or two of produce. Sometimes, especially late in the season, you have trickles of multiple crops but an abundance of none. Here are two ideas for using this produce.

If you have such things as beans, small onions, carrots, peppers, maybe some cucumbers or summer squash, you can mix them all up in dill pickles. My recipe calls for a cup of liquid in a pint jar, and the liquid is half vinegar and half water with a tablespoon of canning salt per pint. You bring this liquid to a boil after you have all your veggies chopped and your jars ready—I like to throw in a small clove of garlic, perhaps half a bay leaf, a few mustard seeds, a spring of dill if I have it, into each jar. Then stuff them with the chopped veggies, fill with the vinegar solution, put the lids on and do a 15 minute boiling water bath (with at least an inch of water over the tops of the jars). You can even use carrots with defects—just use the good parts, chopped thin so the vinegar penetrates. The contents probably don’t need the 15 minutes but that way you know the jar and lid are sterilized and you can put the jar on a shelf and forget it.

The other recipe is for salsa. We like a dollop on our breakfast eggs, but it’s also good to add to chili and sometimes other recipes.  Typically, this time of year my tomatoes are full of disease and producing only small amounts, but my peppers—green and hot—are finally producing well.  My onions and garlic are done but I can use some up in this.

Here is the recipe for six pints:

All ingredients are chopped: 10 cups of tomatoes, 5 cups of green peppers, 5 cups of onions, 2 ½ cups of hot peppers, six cloves of garlic, 1 cup of fruit. Add 3 cups of tomato sauce and 1 ¼ cups of apple cider vinegar, and a tablespoon of canning salt. Cook until it thickens—between half an hour and an hour probably—then give it 15 minutes in a boiling water bath. You could use a pressure canner…with pickles you don’t want to do that as it can make them soft and soggy.

A few extra tips: don’t bother removing the seeds from the hot peppers unless you don’t want it hot. I find the secret to crisp pickles is using really fresh picked produce. Like, picked the same day.

Sometimes I get enough for a worthwhile canning batch by doing two different recipes together—like three pints of salsa and four of pickles or jam. But this makes for a headache, trying to organize two different operations to be ready for the canner at the same time. 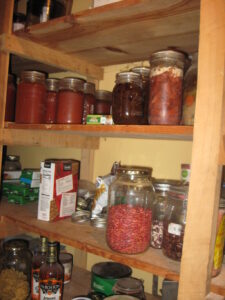 Action Alert  Sep 1, 2021
Do You Know Someone Affected by Fracking?

Hoots and Hollers  Aug 25, 2021
The Myth of Carbon Capture Technology

Hoots and Hollers  Aug 16, 2021
Daughter of Cucurbits-Blog 64 in a Gardening Series

Hoots and Hollers  Aug 12, 2021
What You Don’t Grow Yourself-Blog 63 in a Gardening Series

Hoots and Hollers  Aug 9, 2021
The Hand that Rocks the Cradle Can Save the World
Hoots & Hollers, the OVEC Blog © 2014 Frontier Theme
Send this to a friend