If your garden is ready, there are a few things you can plant now: spinach, peas, lettuce and radishes. Also, garlic if you didn’t get that in last fall. Now is when it pays off to have raised beds, as they dry out earlier and can be worked earlier than flat ground. It’s also handy to have done your soil prep in the fall, so all you need to do now is rip off the cover crop, if you had one, or remove the hay cover if you used that, and any weeds. Then, if you didn’t do it last fall, you turn or till your ground, add whatever it needs—compost, leaf mold, or well-aged manure for organic matter, sand if your soil is too heavy, wood ashes or lime if it’s too acidic. If you’ve never done a soil test, now’s the time—get advice from the County Extension. The WVU lab will run the analysis free, though you’ll have to pay the postage to mail your dirt to them—half a cup or a cupful.

For the spinach and lettuce, you want a finely worked, smooth seedbed. The radishes can be planted with them; I usually drop a radish seed at each end of a row of these and carrots, because they pop up in three days and mark the row. But I often squeeze a row of radishes between those of other salad crops, too. I really like radishes in my salads, and you can only grow them successfully in cool weather. The same is true to a somewhat lesser extent with spinach and lettuce. I currently grow mostly New Red Fire lettuce because it’s very late to bolt and doesn’t get bitter; and I’ve grown Palco hybrid spinach the last couple years because I’ve found it much more productive than others.

Peas can be grown near the salad items but are reputed to “hate” onions and garlic. I grow both snow peas and sugar snap types, but don’t bother with shelling peas anymore. I choose varieties that require support as I assume they will produce more over their longer vines. What I do is put metal posts at both ends of a bed, in the middle, and put a ten foot stretch of field fencing between them. Each end is curled around so it can be pulled over the post and stay in place, a sturdy support for the peas first and later for beans, which I will plant on the other side of the fence before the peas come out. This leaves about eighteen inches of space on each side of the fence, which runs down the middle of the bed. Since this will shade the bed for part of the day on each side, I grow things that like some shade here: the lettuce and spinach and radishes, or brassicas (but this hasn’t proven successful) and celery. I also had my “ginger” there the last couple of years, but it turned out to be inedible hedychium. I’ve ordered real ginger to see if I can grow that.

Onions can be grown with the salad items but not with the peas. We eat a lot of onions, and can keep them in braids until February or March. So, I grow at least one whole bed of solid onions, in rows about six inches apart, and a couple of beds with rows of onions alternating with carrots (the carrot rows go in later after the onions are up). I may also make onion “grids” like the ones I make of garlic in fall, where I plant late crops in the open spaces—things like sweet potatoes, peppers, and tomatoes. I also sow fairly solid beds of onions or garlic in which I leave two big holes in the middle, in which I will plant winter squash or melons in May. By the end of June when I yank the garlic or onions, these crops are ready to seize the newly available space.

You can grow onions from seed, but the one time I tried it I ended up with onions the size of onion sets at the end of the season, so now I just buy sets locally. Onions are complex creatures, coming in short-day, long-day and medium-day varieties, and we live near the dividing line of latitude. It’s all very confusing but I find that if I buy the sets available locally, they are ready to die down and be harvested by the first week of July. I like the red ones, which may be a little more susceptible to rot than the yellow ones, but there isn’t a big difference and I like having red ones for pizza and quiches. I’ll grow somewhat more yellow, or Spanish, onions. The white ones, in my experience and from what I’ve read, are considerably more prone to rot, so I don’t grow those.

How to choose onion sets (this paragraph is for my husband): first, skip the white ones and get plenty of red and yellow ones. You aren’t going to pick out individual onion sets, so scoop up sets of good quality onions only. To be good quality, a bin should contain few if any rotten sets (shriveled, sometimes showing some blue) and should have medium-sized sets mostly. The very small ones (pea sized or smaller) will make small onions. The big ones will make large onions, but these are prone to flowering, splitting, and not keeping well. A few in the batch are all right; you can use them first. But if the whole batch is three-quarters of an inch in diameter plus, look elsewhere.

These are all hardy crops that can be planted now, or in April. The onions can go in as late as May but will be smaller if planted that late. Spinach and radishes are likely to bolt without producing much if planted in May. These crops have a biological clock that starts ticking when they get hot weather. So if they hit hot weather as soon as they emerge from the soil, they’ll go directly to seed without passing Go, collecting $200, or giving you an edible crop.

Nothing else should be planted this early; but there are crops that can go in before you’re sure we’ve seen the last frost: carrots, beets, Swiss chard, potatoes and the brassicas. And there are many things you can plant indoors now, with intentions of setting out after the last frost. I have started many flowers which I won’t name here, but I have celery already up, sunbathing in my greenhouse on sunny days, along with sweet potatoes in jars, and while the leeks seem not to have germinated, the bok choy I planted two days ago is already up and in the windowsill. The brassicas, of which bok choy is one, are very fast germinators and growers, which is why you don’t start them any earlier than this even though you can set them out in April; they can take a light frost but not a hard freeze. 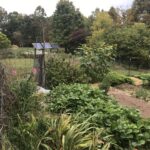 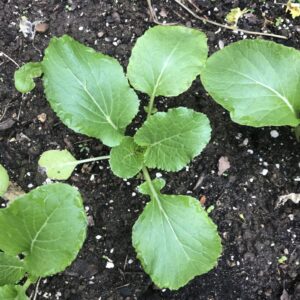