I went to the Farmers’ Market in Spencer one recent weekday. I wanted to make some salsa, and while I have everything else, my green peppers are just finally starting to make tiny fruits. My tomato plants are so full of disease I keep expecting them to slow to a trickle too small to make sauce. So I was hoping to find green peppers, hopefully raised organically, and considering buying some tomatoes even though I have quite a few, so I can can a batch of sauce and a batch of salsa.

There was only one vendor, and he had only three items: green peppers, tomatoes and potatoes. The peppers were huge, certainly worth a buck each. Not quite organic—he used Miracle Grow, but no pesticides. I also bought a couple pounds of tomatoes to supplement mine.

I want to make a couple of points here. Why was there only one vendor? He says Saturdays get more—but I think it’s mostly that people don’t even think of checking out the Farmers’ Market, or don’t bother because they can go to the giant, evil, big box place that is a wart on the mall, and that is so convenient.

Okay, it is convenient to find everything in one place, and the prices are low—but so is the quality. That place squeezes its suppliers as well as its employees—some producers have a special lower-quality line for that market so they can make any profit at all. As for the workers, I’m sure many are happy to have the job but the MallWart has a special plane that takes off with experts on board any time they get a hint of union talk in one of their outlets. So far it has worked—no unions anywhere in the world, and profits flowing steadily from a thousand places into a town in Arkansas, and into the bank accounts of four or five people who are among the world’s richest, a position they have earned by being born into that family. Is this what you want your food dollars to support?

Now let’s go back to the Farmers’ Market. Here, 100% of the money you spend is circulating locally, after supporting a farmer who is part of our community, and keeping farms going that could be crucial when the trucks stop rolling into the malls. And… while you’re buying those peppers you have such a pleasant chat with the seller. Shopping there is fun—not like the business you want to complete ASAP, irritated when the checkout line is long or moving too slowly.

I think part of why Spencer’s Farmer’s Market is so small is a vicious circle phenomenon—if shoppers checking it out finds few vendors and nothing of interest, they likely won’t return; and if too few shoppers come by, vendors don’t return. So—maybe consider doing your part to pump it up?

Another option, sometimes, is straight trade with people you know—like when I traded extra sweet potatoes and butternuts for goat cheese. If you have a good-sized garden, you probably have a surplus of something. Perhaps you can find someone with a complementary situation—they want your surplus and they have extra of something you need. Again, there’s something satisfying about this kind of arrangement. There’s more to it than just the colorless checking off of a grocery list. And it doesn’t always have to be a trade. If you have extra of something someone needs, you can just give it to them and that feels good too.

Similarly, if you need to buy something, choose a local mom-and-pop, the kind of place there’s only one of, the kind of place that has wooden floors, where people hang out and shoot the breeze, and ask after the health of each other’s kin. Supporting such places keeps them going—and we may need them when the soulless places that throw one link of an endless chain into our area, indistinguishable from the one in Yuma or the one in Boise—places that exist solely for rich people far away to make more money—close up as soon as the profit dwindles. Choose places that are real, that have personality, that involve human connection. They depend on our business, and frequenting them is better for our mental health than spending time in the zombie world of the chains. 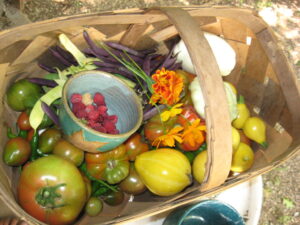