So far in this gardening series, I  have written about everbearing raspberries, and strawberries. Now, let’s talk about some of the other berries.

Let’s start with blackberries. There are thornless varieties now, so I don’t see why you would choose the old thorny kind, unless you are going to put them in an unfenced area—and even then, likely you will mind the thorns more than the deer and others do. The new varieties are highly productive, with big berries. You plant them a good three or four feet apart, near a fence, or else you may give them a simple trellis. Snipping out the old dead canes makes it easier to harvest the fruit. There isn’t too much else to do for blackberries besides planting them in good soil and full sun in the first place, and giving them some manure or compost occasionally (they shouldn’t need it every year) and keeping them heavily mulched all the time. This is easier than mulching other things as you can use whole leaves—the canes rise up high enough they won’t be smothered.

My experience was that I planted big fat canes that had been about four feet high in their old location—but they produced rather spindly, lax canes the first year. The next year they produced bigger, upright canes but it wasn’t until the following year that I got a lot of fruit (no doubt it helped that I excluded the chickens from the patch that year, which was last year).

Blueberries can be difficult because they demand extremely acid soil. I made the mistake when I first started my patch here of making a box out of concrete blocks for the fence around the patch. Concrete can leach lime, which is alkaline. Maybe that’s why they did so poorly—one of the four died and only one produced any berries. After a few years I made them a new bed, in a hugelkultur. I skipped the box but used four metal fence posts at the corners, and one-inch-mesh poultry netting six feet tall. When the berries begin to ripen, I pull a stretch of netting over the top. This is working very well. It also helps that I toss spent coffee grounds in there, and keep it heavily mulched in leaves.

Another good option may not have even heard of—goumi berries. This is a relative of the evil twins, the megalomaniacal Russian and Autumn olive. Unlike them, it isn’t invasive. Like them, it’s perfectly happy in poor soil and it fixes nitrogen—so it’s good for surrounding plants. And like them, it produces sweet-smelling flowers in April and red berries full of antioxidants—–goumis make them in June.

It’s remarkable how little care these bushes require. I ordered and planted a pair a few years ago—the common cultivars Sweet Scarlet and Red Gem. It takes a few hours to harvest each one, and perhaps half an hour to prune them in late winter. The pruning is for the purpose of thinning them out to make harvesting easier. And that’s it—they need no other care and seem not to be bothered by deer or anything else (birds do harvest some berries but not enough to worry about). The underside of the leaves are silvery, making a pretty sight when turned up in a storm.

Using goumi berries is a bit of a challenge. They are somewhat sour, but not too sour to eat straight. But they have a pit. So what I mostly do is simmer them and strain out the juice, which I then cook into a syrup. You can also make jam, and I think I’ll try that this year as I also have too many strawberries. In the past two years, I just froze the syrup, but it was hard to use up: we tap maples so maple syrup is preferred for pancakes, and my husband likes to make hot fudge sauce for ice cream. But this year I used some old syrup left in my fridge, which had turned into a jelly, combined with some surplus raspberries, to make a topping for a cheesecake. Then a put a thin chocolate ganache over the top. Wow! Perfect. The goumis add just enough tartness to complement the other flavors.

Bottom line: if you have room, do plant fruit trees. But for reliable fruit, in two years or less, plant berries—blueberries, strawberries, raspberries, blackberries, goumis—they’re all good. 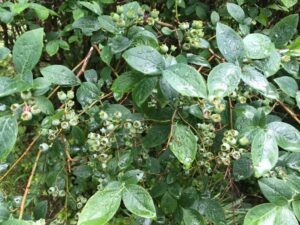