To show the negative impacts of plastics production throughout the entire plastics supply chain, two grassroots women activists impacted by plastic end-use waste in India and the Philippines are now on tour in the United States, from May 14 to May 25.

Myrna Dominguez, a food sovereignty activist from Manila, Philippines says, “I’m here visiting communities in the U.S. threatened by plastics production in order to bring voices from our coastal communities halfway around the world that are harmed by plastics, too. Plastic trash pollutes our waters and destroys fish sanctuaries, harming our fisherfolk whose livelihoods depend upon clean water and healthy seabed.”

Lakshmi Narayan, from Pune, India and a representative of waste pickers in India says, “Waste pickers, who make a living dealing with with plastic waste every day, would support the fight against increasing production of plastics, especially single-use plastics which have little or no economic value. The environment is already suffocating from the pollution wrought by too much disposable plastic packaging, and waste pickers who are efficient in recovering materials, know that recycling alone will not solve this problem!”

The two women on the Stopping Plastic Where It Starts tour are also joined by a few others, including Jed Alegado, who works for Break Free From Plastic out of its Manila, Philippines office.

The tour fosters a global exchange between activists fighting plastic pollution from the beaches and landfills in Asia, to those on the front lines of the petrochemical industry in Texas and Louisiana, to those of fracking front lines in Pennsylvania and West Virginia, who are also now faced with a potential petrochemical build-out in the Ohio River Valley.

#BreakFreefromPlastic member organization Earthworks organized the tour group, which has  already met with Portland Citizens United in Portland, Texas. PCU  is profoundly concerned by Exxon/SABIC’s Gulf Coast Growth Ventures petrochemical complex, which would include the largest ethane steam cracker facility in the world.

Thank you @txenvironment for hosting us! #stoppingplasticwhereitstarts tour goes to the First Unitarian Universalist Church in Houston tonight at 7 PM CDT! See you there! #breakfreefromplastic pic.twitter.com/OYePhym7El

The tour group will met with TEJAS and with Hilton Kelley (both of whom OVEC is working with in regards to EPA’s Chemical Disaster Rule delay), as well as The Louisiana group Humanitarian Enterprise of Loving People (H.E.L.P.).

After meeting with these folks fighting the petrochemical plants in the Houston and “Cancer Alley” areas of Louisiana, Myrna and Lakshmi and their tour guides will meet with people living on the front lines of the frack attack, people who are now also fighting the proposed Ohio River Cancer Valley, AKA the Appalachian Storage Hub.

In the Pittsburgh area, the group will meet with the public on May 22 for Where Plastic Ends Up – An International Perspective on Plastics and again on May 23 for Energy Innovation Center.

Our friends at Center for Coalfield Justice, the League of Women Voters of PA, The BREATHE Project, Allegheny County Clean Air Now, Beaver County Marcellus Awareness Community, and Communities First Sewickley are co-sponsors of these meetings.

On May 24, the tour then heads to West Virginia, to meet up with OVEC, assisted by Wetzel County resident Bill Hughes, for a tour of fracking-related impacts in North Central West Virginia.

The #stoppingplasticwhereitstarts tour concludes with Lakshmi and Myrna and friends meeting with a host of environmental group representatives in Washington, D.C.

We are so excited to meet Lakshmi, Myrna and Jed! We will thank them for their work, and we’ll be sure to let them know that we are part of the growing, worldwide movement to break free from plastics, unlike many of the fossil-fuel-corrupted politicians here. Here politicians and those who stand to profit off the pollution have a sad, same old extraction/pollution vision for our future: plastics, plastics, plastics (read: toxic, toxic, toxic).

People from West Virginia, Pennsylvanians, Texas, Louisiana, the Philippines, India and the whole wide world deserve a better vision for the future!

Thanks to DC Action Lab and Earthworks for making certain OVEC could be part of this groundbreaking tour of international solidarity in the work to #breakfreefromplastic!

*#breakfreefromplastic is a global movement envisioning a future free from plastic pollution. Since its launch in September 2016, more than 1,100 groups from across the world have joined the movement to demand massive reductions in single-use plastics and to push for lasting solutions to the plastic pollution crisis. These organizations share the common values of environmental protection and social justice, which guide their work at the community level and represent a global, unified vision.

Something Fishy: Toxic Plastic Pollution Is Traveling Up the Food Chain

WE MADE PLASTIC. WE DEPEND ON IT. NOW WE’RE DROWNING IN IT.

Ocean plastic pollution is hazardous waste the US should ban

Want Less Ocean Plastic Pollution? Make Less Plastic: “But the biggest thing we can do to reduce ocean plastic pollution over the long term is to produce less plastic. And that starts with opposing the epidemic of new plastic plants and the cheap, fracked natural gas that fuels them.” 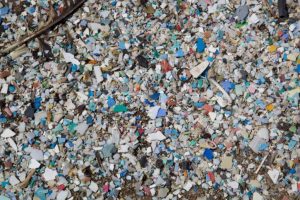