I have documented the activities of shale gas operators in Wetzel County, WV for more than eight years.

The original shale conquest on the Wetzel front began about 10 years ago. Part of the groundwork for the invasion took place years before that, when land agents were quietly trying to buy up as much mineral rights as possible for the least amount of money, with the contract terms most favorable to the gas companies. And, then, get out of town before the ink was dry and residents realized what they had signed away.

Around here, at first,  a lot of those guys were Chesapeake Energy Corporation-related troops. All those activities occurred behind the scenes, but once the invaders were ready to crack some shale, it became pretty hard to hide the operations.

The recent resurgence in shale gas is not at all some, sneaky, fly-by-night operation, attempting to surprise the inhabitants and quickly subdue them and take over as it did years ago. No. No we know what will happen. And, also no, because now it occurs in broad daylight and with big red machines forming an impenetrable column on the roadway. All local traffic knows that it must yield to the big red machines. They will not stop. A good example is shown here on the only stretch of straight road around:

Another view shows them passing through the neighborhood, along the same route:

Since I have documented the shale gas operations here for years, sometimes I actually go looking for anticipated problems when I expect a higher concentration of traffic in a small area. You see, fracking-related activities create a staggering increase in heavy equipment on our rural roads. Those extra-large vehicles are almost always driven by out-of-town drivers who don’t know our roads. Incidents are very likely to occur.

Sometimes, I don’t even have to go looking for the anticipated traffic woes—they find me, as in what you see here. I was just about to pull out of the gas station in town, but could not due to the long stream of red iron on wheels, their rear ends emblazoned with the word “Halliburton.” I was in New Martinsville on the western edge of Wetzel County. I quickly decided someone needs to follow these fellows to make sure they do not get lost. That follower would be me. I was behind the white van.

On its way to a well pad, this string of traffic took a different (not better) route than this company usually does. But all roads here are narrow with lot of twists and sharp bends and steep hills. Many of the gas companies arrange to have a pilot driver or escort vehicle go in front of the big trucks. The leading escorts call out on the CB radio to forewarn the truckers of oncoming local traffic, and if possible to stop all the  smaller vehicles. In this case the white van here was also a Halliburton vehicle but, for some unexplained reason, the van was following the red parade, not leading it.

The red machine column continued on, safely avoiding any mishaps. In all my photos here, I can only see a few of the trucks since the lead ones always disappear around the next bend in the road.  As can be seen below, there is another sharp turn to the left coming up:

We do not just have meandering roads here, we have hills also—lots of them. Below, on one steep hill, we can see only two of the seven red trucks; the other five are further up the steep hill, around a few more bends:

Thankfully these seven Halliburton trucks arrive at the designated well pad near Mobley, WV. Only some minor congestion is caused at the entrance to the well pad as shown below here: 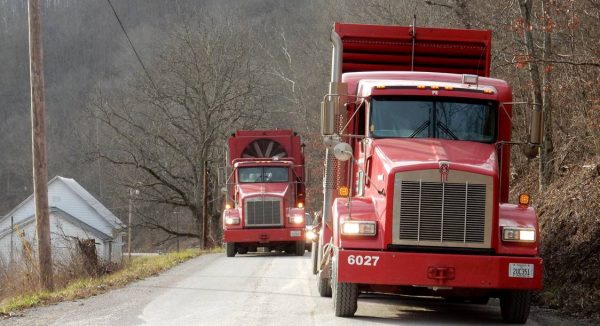 Both of these trucks were stopped here, on the public roadway for a while. This was temporary and not too unusual on our roads here, as there is just not enough room on the well pad’s access lanes to accommodate bunches of large vehicles in a short span of time.

It seems useful here for us to look at individual trucks, but before doing so I would like to show how the trucks I followed were eventually lined up on the hydraulic fracturing site, ready for high pressure work:

These five (above) are all Halliburton Q-10 dual fuel, hydraulic fracturing pumps. They can run on both diesel or natural gas. What you are looking at here is the working end of the truck—the high pressure pump. At this same site there were previously about 20  pumps before they ran into a down-hole problem with the well and pulled their equipment out, so more pumps will be coming back soon. It is useful to note the very close working area between pumps.  When there are fires and other problems, there is very little maneuvering room. (And oh! there have been fires! See Statoil Eisenbarth Well Pad Fire – An Introduction and In-depth Review of the Statoil Well Pad Fire.) These pumps are identical and each is given its own personal name.

Here’s a driver’s side view of one of the Q-10 pumps—this one named Kenneth: 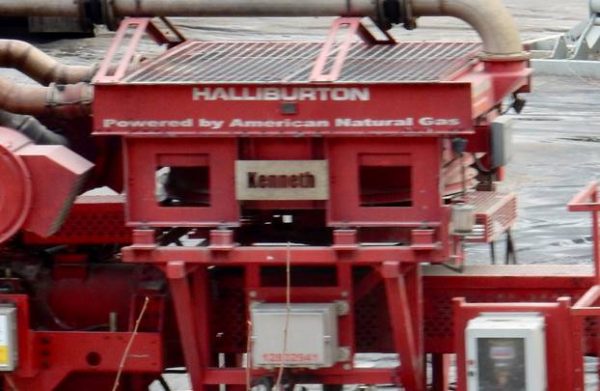 And this one, below, is named Sarah—the token female fracturing pump. She really is one of the boys. Do not mess with Sarah—she has very high pressure in very low places; and when it comes to fracturing shale, the boys she hangs out with will back her up:

Below is the proud SARAH name plate given by Halliburton: 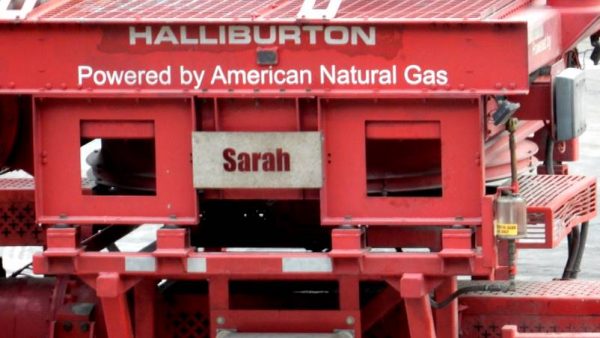 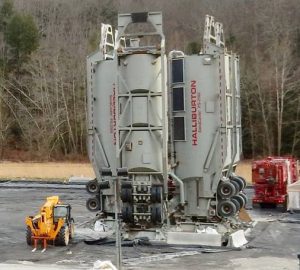 For those readers who are really good with math, you will recall that I said that there were seven big red trucks. The pump line-up of hard to identify suspects, only shows five—where are the other two, you might ask.

Well, in the string of moving red iron, there was also what is called a ADP—advanced dry-polymer truck. It is for mixing and blending of fracturing material. In fact, it was the lead truck of the red string. It the photo at left, it can barely be seen here, to the right of and behind the Halliburton Sand Castles.

Well, now, we need to explain the solar powered sand castles. Yes, solar powered. Those three black panels on the one side are solar panels. Six panels to a tower. And six sand towers here. These are used to store sand, silica, on the well pad.

And the final truck of the seven was the last one in the string. It is called a FB4K Blender. As seen here:

Well that about covers my travels on January 16, 2016. I took about 80 pictures (as you see, I didn’t subject you to all of them) and traveled about 80 miles. Just another day on the roads of Wetzel County.

On January 17, there are 10 fracturing pumps on the pad (six in the back row, and four up front):

Update: On January 20, below, the full complement of 20 fracturing pumps finally were in place. This would likely be equivalent to 40,00 horse power of fracturing pumps. Shown to the right are the six standing sand castles:

A wide angle view of this hydraulic fracturing site would look like the picture below. This is a typical layout of all the standard pieces of equipment needed to fracture deep black shale. The quantities and actual arrangement will be different but this is a typical fracturing site, except for the site itself. This is not a typical location. Unfortunately, this well pad is just in the wrong place and its location presents some serious problems for its neighbors and will continue to do so for decades. But the nearby residents’ homes are not visible here. We need to look at that a little closer. Another blog shows the rest of the neighborhood.