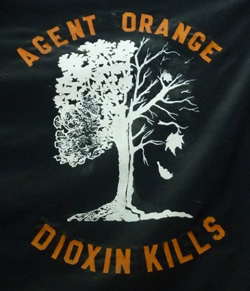 Graphic from Creative Commons and by jectre

The first time I heard the name of the chemical compound dioxin was back in the 1970s. Dioxin is a compound found in the herbicide Agent Orange, which many of our troops were exposed to while serving during the Vietnam War.

My father-in-law spoke about being exposed to the substance when he was an aircraft mechanic during that era. He said the mechanics would get the “oily” substance on their skin while working on the planes. Agent Orange was used as a defoliant, and in many cases, it was sprayed in heavily forested regions to clear a path for airplanes to land. The planes’ undersides would become coated with the substance, and when mechanics worked on these planes they would be exposed. The substance was also sprayed around military bases and to kill crops, as well as to clear forested areas where enemy troops might be hiding.

There were several different herbicide formulations used by the military during that era; “Agent Orange” was just one of them. The name comes from the regulatory requirements of identifying each herbicide with colored stripes painted around the 55-gallon drums containing them. Orange, purple, blue, and white were colors used by the manufacturers to ensure that the contents were easily identifiable in shipment and use. Agent Orange differed from the others as it had an unintentional contaminant, dioxin, in the formulation.

In six years, from August 1965 through February 1971, an estimated 18 million gallons of herbicides were sprayed over 3.6 million acres in Vietnam.  The program of defoliation was called “Operation Ranch Hand.”

“The Red Cross estimates that three million Vietnamese have been affected by dioxin, including at least 150,000 children born with serious birth defects. Millions of Americans and Vietnamese are still affected, directly and indirectly, by the wartime U.S. spraying of Agent Orange and other herbicides over southern and central Vietnam.”

Dioxin was first prepared by two German chemists in 1872. The effects of dioxin were not discovered until 1957 when a lab worker was accidentally exposed to the substance. He was sprayed in the face and later on developed lesions on his skin. A dermatologist described the condition as “chloracne”. Soldiers returning from Vietnam as well as Vietnamese civilians exhibited this condition.

Dioxin is made of oxygen and carbon atoms with chlorine atoms attached to 6-sided hydrocarbon benzene rings. Its IUPAC name is 2,3,7,8-Tetrachlorodibenzo-p-dioxin (TCDD). There are many other health effects associated with this compound.  It is very persistent in the environment, and though the production of Agent Orange was banned in the USA in 1971, in will be with us for decades to come.

Dioxin is extremely toxic to mammals, and testing shows long-term exposure can affect reproduction, cause birth defects, damage the liver, and suppress the immune system. The substance is listed as a probable carcinogen by the World Health Organization.  Along with Vietnam vets, “generations of Vietnamese people have been plagued by cancer, miscarriages, and birth defects as a result of Agent Orange.”

Agent Orange was produced primarily by the Monsanto Corporation and Dow Chemical. Both companies say the defoliant was made according to strict military specifications; basically, stating that the US government told them the chemical recipe and how and when the product would be used in the field. “But a 1990 report compiled by Adm. Elmo R. Zumwalt Jr. for the Department of Veterans Affairs that recommended compensation for ailing veterans who’d been exposed to Agent Orange also detailed evidence that Dow Chemical knew as early as 1964 that dioxin was a “byproduct of the manufacturing process” and that the dangers of exposure were clear.”

In 1978, Paul Reutershan, a former helicopter pilot told viewers of the “Today” show that he died in Vietnam. He was referring to the fact that his exposure to Agent Orange was substantial enough to ultimately result in his death. Each day while in Vietnam he flew through clouds of herbicides that were discharged from C-123 cargo planes. He described how the mangrove forests died leaving “dark swaths cut in the jungle by the spraying.” He also said that he wasn’t worried then as he was assured by the Army that the substance was “relatively non-toxic to humans and animals.” He died nine months after the “Today” show interview on December 14, 1978 at the age of 28 from cancer that had invaded his colon, liver and abdomen.

There are other ways that people, especially workers, can be exposed to dioxin. Farmers and forestry workers who deal with pesticides and herbicides may be exposed to the compounds. “Farmers used 2,4,5-T to kill broadleaf plants in pasturelands. Foresters, including the U.S. Forest Service and other federal agencies having jurisdiction over national lands, forests, and parks, have used herbicides to keep down brush and undergrowth and to eliminate unwanted hardwoods in pine forests.”

Pulp and paper mill workers can be exposed, as the necessary precursors to produce dioxins are present in the form of cellulose and bleach used in the paper-making process. In addition, discharges from these mills can contaminate waterways with dioxins. These fat-soluble substances can be absorbed by fish and other aquatic life. Dioxins are present in the Ohio River and are monitored by ORSANCO.

Another process that results in the formation of dioxins is incineration, especially incineration of industrial wastes that contain hydrocarbons and chlorinated compounds. “Dying from Dioxin” by Lois Gibbs of Love Canal fame, is an excellent book which describes the stories about dioxin including the battle to stop East Liverpool’s hazardous waste incinerator on the Ohio River.  Residents of the upper Ohio Valley now get exposed to dioxin through their air, water and food. East Liverpool “has a staggeringly high cancer rate. In 2009, data showed that East Liverpool’s cancer rate is 615.8 people per 100,000. The Ohio average is 450.4.”

Dioxin was in the 2,4,5-T was produced from 1948 to 1969 at Old Monsanto’s Nitro, West Virginia, facility located along the banks of the Kanawha River. The plant experienced an explosion in 1949 which resulted in a large venting of the compound into the surrounding environment. The river is now contaminated with the compound and local residents have it in their bodies. They have filed several class action lawsuits to seek reparations from the company. The company settled the lawsuit in 2012 and “provided $9 million to have 4,500 homes professionally cleaned, as well as medical benefits for residents, including a thirty-year monitoring program at a local hospital.”

Another accident at a plant that was producing dioxin-contaminated herbicides occurred in Seveso, Italy on July 10, 1976.  It was estimated that the explosion spewed the compound over the town’s residents. Over 200 residents exhibited the chloracne and plants and animals in the region died. A 40-year health study of the effects on residents continues.

If you think you are safe from dioxin because you aren’t exposed via your occupation, or don’t live close to a facility associated with dioxin, think again. People who use burn barrels to destroy their garbage can be exposed to dioxins from plastic wastes. Additionally, we all get a bit of dioxin from foods. Because dioxins are fat soluble, they can be found in trace amounts in foods like meats and dairy products. They are persistent and do not easily biodegrade, and therefore they build up in our fatty tissues.

The possible build-up of a petrochemical hub in the Ohio River Valley might also lead to more dioxin exposures for local residents. “Three types of chemical manufacturing processes lead to the production of dioxin and include: bleaching of wood pulp in paper manufacturing, chlorine and chlorine-derivative manufacturing, and halogenated organic chemical manufacturing.” The Ohio Valley does not need another industrial facility that pollutes the air and water with dangerous compounds.

Sadly, my father-in-law died at the age of 65 from a very fast-spreading cancer; pancreatic cancer. We will never know for sure if his two tours of duty in Vietnam were to blame.