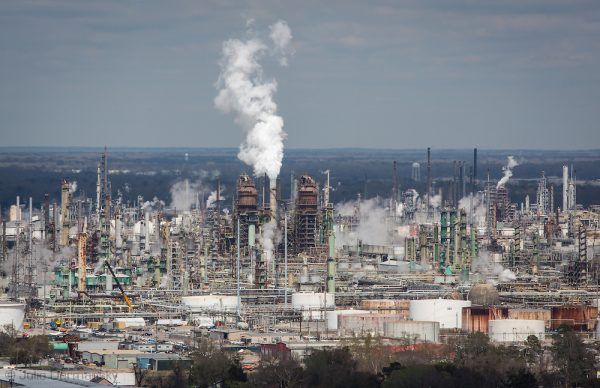 March 8, 2014, Baton Rouge, Exxon Mobile refinery as seen from the top of the Louisiana State Capitol Building. The area from Baton Rouge to New Orleans is know to many as ‘Cancer Alley’ due to the high number of oil and gas industry sites.

According to recent reports, the so-called “Appalachian Storage Hub” (ASH) has cleared its first hurdle. The U.S. Department of Energy has granted the first part of a two application loan of $1.9 billion for the Appalachia Storage & Trading Hub initiative. Heading this project is the Appalachian Development Group (ADG) owned by Mid-Atlantic Technology, Research and Innovation Center (MATRIC) and the WVU Innovation Corp.

This hub has already been called a number of different names ranging from the Appalachian Ethane Storage Hub to ADG’s Storage and Trading Hub; each sounding more benign than the other. What it really should be called is the Appalachian Petrochemical Hub. If it is developed, this hub would bring a massive build up of the petrochemical industry stretching down the Ohio River from Beaver, PA, to Huntington, WV. It would stretch into surrounding counties with a spur from down the Kanawha River from Point Pleasant, WV, to Charleston. It could potentially make the “Chemical Valley” in Kanawha County look like an afterthought. Champions of the proposed hub see this as a good thing.

Map showing current (existing and planned) NGL Infrastructure in the area. This map does not show pipelines and other infrastructure for “dry gas” (methane) production. The infrastructure would increase if the Hub is developed. Click to enlarge.

The hub would mean the construction of a slew of petrochemical refineries, pipelines, and more.  Hub-related facilities would use the leftover liquid by-products of methane production (called natural gas liquids or NGLs, though there is nothing “natural” about it), so that would mean an increase of fracking-related activity and infrastructure as well. The two would need to feed one another.

Of course, those with vested interests are touting this as the latest great news jobs-savior for our region. The American Chemistry Council is touting its own report that imagines the hub attracting up to $36 billion in new chemical and plastics industry investment, and 100,000 new area jobs. The accuracy of the report is yet to be determined. The long-term viability of those jobs is another question, too. One wonders what kind of other jobs prospects we’d have in the region if a massive petrochemical complex further destroys our air and water. Would most of the much-touted jobs go to locals, or will many of the potential jobs go to out-of-state workers, as  we already see in the oil and gas industry here?

ASH maps in this blog are from a report prepared by the Appalachian Oil and Natural Gas Consortium at WVU. Click on this map to follow a link to the report.

Haven’t we learned any lesson from what the coal industry has done, where the majority of what is produced here is exported elsewhere, and the profits made by companies from outside the region? Not to mention it is all a boom and bust mono-economy.

When you peel back the “jobs” argument, what’s left are more hazards than benefits. This petrochemical hub would mirror the one already in existence in Louisiana, known as “Cancer Alley” (watch a short film here on Cancer Alley) along the Mississippi River. We have been talking with folks there and they have experienced troubles from higher cancer rates and illnesses to massive sinkholes. Do we really want all of that in our backyards too?

All one has to do is pick up a copy of the book Petrochemical America to see the impact this industry has really had on folks in Louisiana. These companies expect people to ignore the hazards as long as there are dollar signs involved.

Once again the people of Appalachia are being told that we “need” to put health and safety on the line for industry profit. Who is going to protect us when something goes wrong? The current EPA is very pro-industry and our own WV Department of Environmental Protection has already proven time and time again it can’t protect the people of West Virginia.  We have already had a long history of industry disasters here in the state. Its only a matter of time before something goes drastically wrong with this hub. Remember when methylcyclohexane methanol was difficult to say? Imagine what words come with the petrochemical industry.  Understand that the products these facilities will be making are toxic to people.  Keep in mind, too, this hub will not only impact people in West Virginia, but folks in Ohio, Pennsylvania, and part of Kentucky too. The Ohio River is the source of drinking water for more than three million people and almost 10% of the U.S. population (more than 25 million people) lives in the Ohio River Basin.

This hub of horrors is a nightmare waiting to happen. We Appalachians need to defend ourselves from this monstrosity and stand in support with folks in Louisiana already living the nightmare.  The people deserve better than false economic hope and toxic neighbors.

Illustrated map of the area know as “Cancer Alley” in Louisiana and the types of chemicals being produced.

Here’s more from OVEC on the ASH petrochemical nightmare:

It’s Not a Done Deal: Say “No!” to Appalachian Storage Hub – Part 1 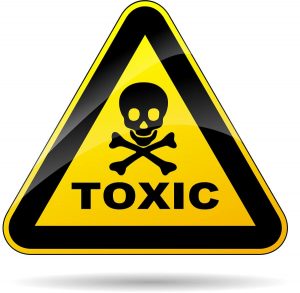