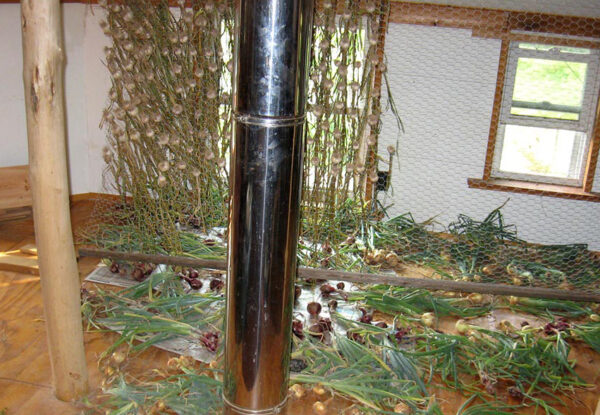 In my garden, late June and early July is a time of transition. Some early crops are coming out and I’m replacing them with late crops.

Radishes and spinach are all gone. They can’t take heat so I grow them only in spring and then again in fall. The same is true for the brassicas I grow, bok choy and Chinese cabbage. All of these can overwinter in the garden with a little protection. Now I need to find something to plant where the spinach and some of the lettuce came out (I still have New Red Fire lettuce growing. It’s bolting now but the charm of this variety is that even when it bolts, it doesn’t get bitter.)

I pulled up all the garlic and let them lie in the sun for a few hours which dried up the dirt so it brushed off the heads, and then poked them through a vertical screen of two-inch-mesh poultry netting (see my photo above). This lets them dry without taking up much space. I need that space for onions, which I will be pulling up next and which need to also lie around to dry for a couple of weeks—until the tops are completely brown, no green left, at which point I mostly braid them and hang the braids from nails I put in the kitchen ceiling beams. Those without braidable tops go in net bags. Any that aren’t going to keep long get used first.

When the garlic is dry enough I’ll clip off both the stalks and the roots. I grow the hardneck type, which don’t have braidable tops, because I’ve had better luck with them; if you prefer the softneck types you can braid their soft tops like onions. These should keep all through the rest of summer, fall and winter but you need to go through them every month or two to cull out any that are getting soft or sprouting. With garlic I feel for soft cloves, and any head that has a soft clove gets set aside. I then rip the head apart and toss the rotten parts—the good cloves go in a special bowl to be used first. I also mince some and stuff them into small containers to go in the freezer. These are nice to break out in early spring when the fresh garlic is gone.

One more bed about to be emptied is my oldest strawberry bed. I have two younger beds I’ll keep but it’s time to cancel this oldest one. The old plants will go in a pit where I throw diseased vegetation, lest they transmit disease to younger plants through the compost—but the weeds will go in the compost.

Two whole beds of garlic, one each of old strawberries and onions, plus I’ll be removing the onion stripes from the carrot/onion beds. What to plant now to replace these things? With the carrot beds I’ll just weed and thin the carrots and put mulch between the rows where the onions used to be. For me carrots are never ready to pull before August.

I’ve already planted peanuts in both garlic beds. The Spanish Valencia variety I grow only needs 110 days—still, they need to go in the ground now. I grow peanuts for snack food, and a source of protein and fat, but also potentially as a way to get oil and peanut butter if I someday can’t buy those things. It would take too much ground devoted to peanuts for that to be a practical plan now, but I’m keeping my strain going in case someday I need to produce my own oil and peanut butter. Besides, growing peanuts is fun. I roast them before storing.

In the past I’ve chosen dry beans as a late crop. They only need 75 to 100 days to mature (depending on variety). But we don’t eat that many beans and I have plenty stashed from previous years, so I probably won’t grow any this year. The tricky part is getting them dry enough in the field, if early autumn is wet. Then I dry the plants further when I pull them, in my greenhouse, before plucking off the pods to dry yet more on trays or in big bowls before shelling. They don’t require canning or freezing but you do have to get them really hard and dry before jarring them, or they’ll rot.

Melons can be a good late crop if you choose varieties that mature quickly, like my favorite, Early Golden Moonbeam. This one is, as the name suggests, a golden color, and it only needs 80 days. Cucumbers are probably a good choice for those who like them.

Another option is sunflowers. I grow the tall giant kind, usually the grey-stripe variety. Mostly these are for seed for my chickens—I haven’t found a practical way to shell enough for human use. But as with the peanuts, in a pinch it would be good to have the crop (high also in protein and fat) and the seed for future crops. Last year I was surprised to see that they only need 70 days, so I planted some quite late—and indeed they did produce decent size plants and heads, not as big as the ones planted much earlier but well worth having. We feed cracked corn to our chickens, and they are free range and find their own supplements—but in the winter the bug larder gets pretty empty and corn doesn’t have enough protein. Feeding a component of sunflower seeds helps keep them laying. 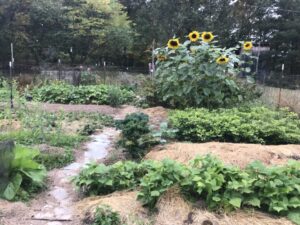