I have actually claimed to like washing dishes, and weeding. The difference is that I only have to wash dishes every other day, while the weeding seemingly never ends (except in the winter).

There is a conundrum here: the best way to reduce weeding is with mulch, blocking sunlight from the soil. This is also good for the soil. But what do you use for mulch?

I find it helps quite a bit to put a double layer of newspaper under a coat of hay or leaves. I don’t come by enough newspaper otherwise, but I can find newspapers in the recycling center. However, using newspaper only works in places where the gaps between desired plants are wide enough for a sheet of newspaper. It helps that newspaper pages are narrower than they used to be. (I admit I remove pages with interesting puzzles—but after I do the puzzles they go back in the stack.)

The problem is with the stuff I load on top of the newspapers, mostly this is hay; leaves can work but most of the large quantity I collect off our lane in the fall and winter, I chop and turn into leafmold, an excellent soil additive. Shredded leaves make an attractive mulch for my flowerbed but I never have enough; whole leaves work well among berry bushes but not elsewhere as they blow away, or matt and block water and air movement.

So it’s mostly hay—or straw, and while straw theoretically is just the stalks of grain crops without any seeds, in practice I find hay and straw nearly always have mature seeds. Often these are grasses or clover, both of which are difficult to pull. If you use enough mulch, the seeds won’t germinate, unless it’s super wet—but next year they will.

This brings me to muse on my favorite weeds—the ones that pull out easily and completely. This includes the typical early spring garden colonizers—purple dead nettle and bitter cress and chickweed. With these and certain others—plantain is one—the secret is to be sure you encircle the whole basal part of the weed with your hand, and pull straight up. That way you usually get the whole weed, with the roots. Shake the soil out of them, dump the weed in your bucket, and move on. Some people just throw the weeds on the surface, where they may act as mulch and eventually compost—but if there is any risk of their re-rooting themselves, I’d rather take them to my compost bin. Weeds are my largest source of material for compost.

The other secret for successful weeding is to time it right. Too soon after rain and you may get the plant up by the roots, but those roots are likely to be clinging to a lot of good soil you want to leave in the garden. Too long after a rain and the soil may become hard, so the stems break off, leaving the roots in the ground to send up new tops in celebration of the next rainfall.

Okay, there is another secret, even if I did say before, “the other secret.” Kinda like “on the other hand…but then again on the third hand…” So, for your third hand: it’s true that ignoring weeds and letting them set seed is a crime against yourself, for which you will pay in extra labor weeding out the copious quantities of children of that weed next year, and its grandchildren the year after that. My worst offenses here involve horse nettle, because I wait until I have gloves handy on account of the thorns, and yellow dock which requires a trowel or shovel for its deep strong roots. If I put off getting rid of them too long, waiting for a time when I have the requisite tool on hand, they get a chance to go to seed.

It’s funny how it seems that every year there is one new weed I don’t recognize. I still don’t have an ID for last year’s—a ground runner with linear leaves with yellow veins and small star-shaped white flowers. This year’s is an easily pulled, single-stalked thing with large, oregano-like leaves with a sweet minty fragrance.

Wait, one more secret—if you weed a large area with a hoe, do it on a dry sunny day so the weeds you rip out die in the arid conditions. All right, that’s four secrets for your four hands, which you have if you’re a Hindu deity—the goddess of weeds, I think. I don’t know this goddess’ name but I’m sure she has four hands, at least. For weeding, four hands would be very… handy. 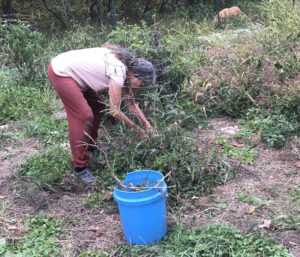