My tomatoes are pouring in, a pungent red river with headwaters in my garden and the mouth in my kitchen. Right now a five gallon bucket filled with tomatoes awaits my attention. This river has perhaps waxed to flood stage earlier than usual; as usual, the plants are rapidly filling with disease also, which will soon cut down on fruiting. It’s the Defiant hybrid behind the early flood, as they are indeed both early and very productive, and are slow to show disease too. The downside of Defiant is that bright red fruits are still as firm as most tomatoes when they’re still in the pink stage.

The other one filling my bucket now is the tastiest but most heavily diseased, the Pink Berkeley Tie-Dye. Those three plants have made an abundance of big, juicy, tasty tomatoes—but they’re full of three different diseases. I ripped the first one out today.

We are not big eaters of plain tomatoes in this house but we make a lot of spaghetti—and lasagna and chili and pizza, all of which use tomato sauce. So I grow about 32 plants every year and try to can about 60 quarts of sauce. I’m going to tell you how I do it and mention some alternatives.

I prefer my sauce thick and without peels or seeds. So I run the tomatoes through a strainer. There are many models of hand-cranked strainer—I got mine off the shelf in McIntosh’s (or was it Hardman’s?). The instructions say you don’t have to cook them first but I find it’s a lot easier if you do, cook them till the pot fills with liquid and they’re softened. (I invariably burn a little on the bottom of the pan but it scrubs off easily.) The seeds and peels are emitted out one orifice of this thing, collecting in a bowl, while the juice runs down a flat chute. I collect it in a large bread pan and dump that into larger vessels. When all the tomatoes have gone through I run the bowl of seeds and peels through again, to squeeze out a little more thick juice. Then I start the hot juice cooking in the same five-gallon pan, while I wash all the strainer parts and set them to dry. Incidentally, the strainer is good for other jobs too, notably making applesauce.

I cook the juice down until it’s half the original volume, and then can it. Some may question doing this in the heat of summer when tomatoes are coming in—but I’d need twice the jars and twice the canning time if I didn’t. Another problem these days is that it has become hard to find canning lids (I have cynical suspicions about this shortage). The pot goes on a burner at the back of the stove near an open window, so the steam runs out the window.

When the sauce is ready, I generally pressure can it for about 15 minutes. You can use a water bath instead with tomatoes, but I find it’s quicker and I get a more reliable seal with the pressure canner (besides, my water bath pot is the same one holding the sauce). Decades ago, taking advice from local women, I used to use the open kettle method, in which hot sauce is put into hot jars, sealed, and done. This is no longer recommended for anything but pickles… and with the advent of low acid tomatoes, it’s probably best to actually can tomato sauce. I also add a tablespoon of lemon juice per quart just before canning.

I’ve heard that you can throw tomatoes into a freezer to deal with when it’s cooler, and that thawing tomatoes let the skin rub right off. Then you wouldn’t need a strainer if you like your sauce with the seeds left in.

Another possibility would be to can finished spaghetti sauce, but you’d need to pressure can it a lot longer to deal with non-acid ingredients, so I don’t.

It’s also possible to dry tomatoes. According to a chart in my preservation book, it should take 6 to 8 hours. That’s what it says for apples too—but I’ve found it actually takes more like 10 hours for apples (sliced) in my Excalibur dehydrator, and the one time I tried tomatoes it took even longer. Even though I was using an Italian drying tomato. And the dehydrator is noisy and take a lot of power. It’s possible to build a solar dehydrator, which would make no noise and require no power, but it does take somewhat longer and leaves you at the mercy of the weather. I wouldn’t want to depend on a solar dryer when our weather around here thinks nothing of rolling in clouds and rain for a week (hard as that is to believe right now with a drought locking in). Having a jar of properly dried apple or pear slices or tomato halves, which will keep on your shelf for a year or two, is a nice thing, I will say that. 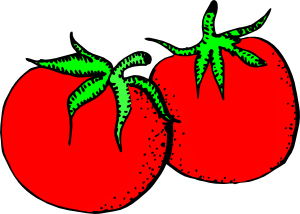