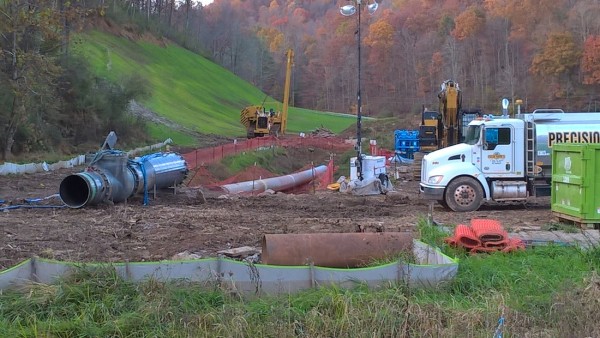 A guest post from Upshur County resident April Keating, who is a founding member of Mountain Lakes Preservation Alliance and a member of OVEC. The Alliance aims to stop, or at least slow, the gas industry’s dreadful impacts to water resources and quality of life in north-central West Virginia.

In the heart of West Virginia, there is a place where there used to be a wetland that is now covered with industrial equipment. The water there was clear and clean. Beaver used to play there and build tiny dams that would cause water to run over the road. The residents didn’t mind, but several years ago, the beaver were removed. Now there is only the sound of compressors, dozers, and pipes belching fire, the noise cutting the once-peaceful valley like a knife.

The crossroads here lead out to rural Appalachia, a place all but forgotten in the rush to drill. The residents here have had sparkling well water for generations. Many people came to places like this for its clean air, wide open spaces, and clean, pure water. Now, many of them have only their memories. Many residents’ health has deteriorated, and their property values have vanished due to, first, gas drilling activity, and now, pipelines.

Tucked away in a corner of Doddridge County is a farm surrounded by four dwellings. Ten years ago, when one company drilled a well here, five people lost their water in one hour. Water that for decades had been clean and pure came out gray or orange. An artesian spring suddenly smelled too much like rotten eggs to drink. One family, let’s call them Family A, called the WV Department of Environmental Protection, who told them not to drink it, shower in it, or brush their teeth in it. Since that day, everyone in that spot has had to carry water in plastic jugs and bottles from the grocery store. You would think the residents in the area would have banded together, but fighting over gas royalties and land rights has split families and pitted neighbors against one another.

Rumor has it that, since a rash of complaints about gas development, county commission in Doddridge only allows speakers 5 minutes to present their case, and if the county commissioners don’t like what someone is saying, they have the sheriff remove that person from commission chambers. The WV DEP has to go by the law, which, 5 years ago and before, stated the distance one could claim damage to a water well from a gas well was 1000 feet. Family A’s well was 1300 feet away from the gas well. The new rules, since the Horizontal Well Control Act went into effect, allow up to 1500 feet for culpability for damage to water wells. Still, company officials did claim responsibility in a strange conversation where they admitted they had drilled a well and “forgotten” to place the casing. They called back and told the family not to worry, they would add a casing and their water would be all right. Test results they sent to Smith Land and Surveying Labs in Glenville, WV never came back, and the company won’t respond to their inquiries. The water never stopped running grey.

This family is now in the crosshairs, caught between not one, not two, but three very large (36-42”), high pressure gas lines. Construction is nearly finished on one, the Stonewall line, a Momentum M3 project. The work is being done by Precision Pipeline, a company that hails from Eau Claire, Wisconsin. Over the past year, Family A has had a struggle with company men coming onto their land without permission and telling them that they are going to do whatever they want and no one can stop them. One reporter from the Appalachian Chronicle was able to write several stories about this family before he was run off by gas company employees, thugs in large trucks who chased him out of the hollow tooting an airhorn out the window as they bore down on him for miles.

It is late fall now, but back in the summer, the As had their hayfield muddied from runoff from the Stonewall pipeline construction. They called Precision’s landman who promised them they would have new hay in a few days. The As also requested that large, straw mats be placed along the hillside, where the trees and grass had been removed, to mitigate the runoff. The hay took over six weeks, several phone calls and meetings, $1500, and a lot of headache to accomplish. The mats, though promised, never arrived, although Mr. A did see trucks going by loaded with them for some other destination. The family had to sell part of their cattle herd to pay for it. The pipeline inspector came out, tsk-tsked and said, “This is awful. I wish I could help, but my hands are tied.”

I visited the Stonewall gathering work site at the crossroads of Big Isaac and Meathouse Fork. The pipeline had been laid and covered and grass was already growing. As I stood in the intersection with your back to Big Isaac, I could see grassy hillside to the left where trees used to secure the soil. Silt socks are strewn about over the grass to prevent the runoff that inevitably fills the streams with silt, harming aquatic life and unbalancing the food web. As with many projects like this, a waterway is crossed. In addition, not long ago the entire area used to be a wetlands. It is on this wetland where the work site is situated, with its utility trucks, storage containers as big as 18-wheelers, and eight compressors sit on about 4 acres. After crossing under the road, the pipeline makes a 90-degree turn and bends again uphill about 45 degrees toward the A farm.

A few weeks ago, on this spot, residents saw a large blue flame shooting up from the ground, in the area of one section of buried pipe, its roaring so loud it was difficult to carry on a conversation. One member of the A family was on her way to the store in town, and she saw the flame as she turned the corner to Meathouse Fork. “When I first saw it, on my way into town, it was the color of fire. When I came back, about ½ hour later, it was a blue color. It had been burning all day, because my son and I could hear it roaring. It must have started about 10:00 in the morning. When I came back from town it was toward evening.”

A man living across the road from the site told me he did not see a blue flame, but admitted the pipeline work was very noisy. Still, when I asked around, I found another two people who had seen the flame, one adult and one child. The adult, call him Mr. B, told me he had indeed seen it, and it had been shooting up some 30-40 feet into the air, accompanied by a loud roar. Both witnesses told me it seemed to be coming from the pipe in the ground, the one in which the trench was open when I visited the A farm on October 25. A few weeks later, on November 14, they heard a loud roaring like gas blowing out, on the hill above, and their eyes were burning from the hydrocarbon fumes. There was team at the top of the corridor, with heavy equipment and spotlights, working from Saturday evening until Wednesday, on a section of pipe that had already been buried.

The Stonewall line is only the beginning for the As – and for the rest of us. Well concerned about potential further damage from the other two large-diameter pipelines slated to come through, the family has reached out to the Department of Environmental Protection, the gas companies involved, representatives in Charleston, and the Federal Energy Regulatory Commission, asking them to consider the damage that the Mountain Valley Pipeline would do to their property. What they hoped for was someone to come out and look at their property, see the damage and the potential for more firsthand, but no one from any agency has physically responded to their calls for help. Now that they have experienced the mistakes and abuses of Stonewall, they fear the worst with the Mountain Valley and Atlantic Coast Pipelines, both of which run within ¼ mile of their working farm and family home.

Out at the intersection of Big Isaac and Meathouse Fork, in the field to the left of the road, is where the Mountain Valley Pipeline, an EQT project, will be laid if it is approved by the FERC. The Stonewall and the MVP will cross in this field. Since the Stonewall is already in the ground, the MVP will have to run either underneath or overtop of the Stonewall line. I question the wisdom of having two, very large-diameter gas pipelines laid one over the other. It seems like a disaster waiting to happen.

As if that weren’t enough, the MVP is sited to run directly next to the family’s homestead, and the ACP a mile away in the other direction. Three pipelines, one farm. Who wins?

There are many issues with these pipelines beyond the environmental. How smart is it to run large-diameter, high-pressure pipelines filled with highly flammable gas under pressure close to dwellings? Has anyone thought about property values? What about water? I don’t have figures on how many people have lost their water, but I have talked with several folks it has happened to, still others who have documented various assaults on streams and wells since horizontal drilling began, and I know there is something wrong with this picture, something ethically and morally wrong. We cannot force our legislators to do the right thing, but we can vote better ones in, which is why all WV citizens need to take to the polls come next November.

In the meantime, it is essential that we stay involved, educated, actively engaged in the decision-making processes of our communities. We need to monitor the movements of our local and state officials and hold them accountable. They may not like it much, but they have shown they can’t do it alone. We need to convince them to use the Precautionary Principle, rather than waiting until everything is wrecked and trying to clean up. It doesn’t work that way.

Citizen watch is crucial at this time in our history, and Mountain Lakes Preservation Alliance can use your help. For more information on how to become involved, see the Resources tab here and keep up on state and local news regarding oil and gas development.

State and local officials and the FERC need to hear from everyone affected. Most often, landowners are referred to as stakeholders, but everyone who uses water is a stakeholder, because gas development takes a major toll on water resources. We are on the front lines of a war on our water, especially in the Marcellus/Utica/Rogersville region of Appalachia. The gas they want to export will be coming from our neck of the woods, and the damage will only increase. There are more than 1,700 well permits in WV just waiting for those pipelines to go in.

Now is the time to stand up for our rights. Hesitation will only give the dark forces more time to do their work. We must stand together in solidarity. 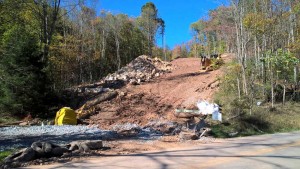