For more than 800,000 years the carbon dioxide levels on Earth remained below 300 parts per million. However, since the beginning of the industrial revolution in the late 1800s and the burning of fossil fuels, they have climbed from approximately 280 ppm to a record high of 415 ppm on April 1, 2021.

As the planet heats up at an alarming rate, West Virginia’s Senator, Joe Manchin, thinks we are “setting a very aggressive timetable” to reach net zero emissions. Manchin, the chairman of the Senate Energy Committee, told attendees at a recent conference held by the Edison Electric Institute he was worried about coal. It is obvious he’s not worried about the climate.

Neither are most politicians who ignored addressing climate change in the infrastructure bill. The New York Times reported that the $579 billion bipartisan bill “does relatively little to fight climate change, an issue that the president has called an existential threat.”

Economically speaking, when it comes to the climate crisis, it is a matter of pay me now or pay me a lot more later. The Commodity Futures Trading Commission said in 2020, “by 2050 the costs from climate change damages could range from $50 trillion to $140 trillion dollars, yet decarbonizing the US grid in 20 years would cost only $4.5 trillion dollars.”

If we cannot afford the costs of an infrastructure bill that truly addresses climate change, can we afford the market costs (economic) and non-market costs (lives) that continue to be lost as a result of a warming planet?

Our world is in trouble; as scientific studies show, the climate continues to change at an unprecedented rate. Regardless of what some politicians might believe, we are in a climate crisis.

France experienced a devastating cold snap this spring. An unusually warm March caused grapes to bud prematurely only to be hit with frigid temperatures in April. It was estimated that over 80 percent of the vineyards in France experienced damage. The economic loss was estimated at $2 billion dollars. Researchers say that these early warming periods are happening more often as a result of a warming planet.

The French Alps appeared to be bleeding this spring. It was not blood making the ice red but an overgrowth of a red algae found in the higher elevations of the mountain range. As carbon dioxide levels increase and nutrient-rich pollution reaches the mountains, these algae multiply rapidly, similar to the blue-green algae that have caused problems in Lake Erie and the Ohio River.

Just last month the Pacific Northwest was hit with a historic record heat wave killing 116 in Oregon and 78 in Washington. It caused fires to erupt in the region. Scientists determined this heat wave was 150 times more likely because of man-made induced climate change.

The heat wave and subsequent heating of shoreline water along the Pacific coast was cited as the cause of death of more than a billion sea creatures such as sea stars, clams, snails and muscles. Portland, Oregon reached a record-breaking high of 116 degrees F.

Elsa, the fifth tropical storm of 2021, became a record setter as the earliest named “E” storm on July 1, edging out Edouard which was named on July 6, 2020. Elsa is the earliest hurricane observed in the Caribbean since Hurricane Alma in May 20, 1970. Elsa arrived a month earlier than the normal start date for the Caribbean storm season, which is August 10.

One would think that these climate events as well as hundreds of others are enough to justify taking definitive and quick action to move the world away from fossil fuels and towards renewable energy. Sadly, that’s not the case, especially in the USA.

Republican Sen. Ron Johnson of Wisconsin said, “I don’t know about you guys, but I think climate change is bull-(expletive deleted).”  But, Dr. Michael Notaro, Associate Director of the Nelson Institute Center for Climatic Research, said data shows Wisconsin’s climate is changing. The months of November, December, March, and April now have very little snow. Most of the snow is now compacted into the middle of the winter season (January and February).

The senator might want to consider a report by the Natural Resource Defense Council that shows Wisconsin has a lot to lose economically if they lose their winter season. Winter sports generate $373 million in labor income alone.

Brian Mark, Ohio’s state climatologist, and Aaron Wilson, a senior research associate at the Byrd Polar and Climate Research Center, point to examples of climate change impacts in Ohio. There are longer drought periods and more intense rainfalls as well as a noticeable lack of snowfall across the state and the explosion of ticks in forested areas. Mark points out that while we don’t see wildfires like California, we are seeing higher nighttime temperatures where the lows stay in the 80s in the summer and people run their air conditioners more often.

Unfortunately, a majority of Ohio’s state politicians as well as the current governor seem to be ignoring this issue. Instead of encouraging renewable energy, they have done everything in their power to thwart it and promote fossil fuels. In May of this year, the Scioto Analysis, an Ohio public policy research group, released a study that showed Ohio is vulnerable to climate change. The study also showed if the state were to adopt energy policies such as a renewable portfolio standard, cap-and-trade system, or a carbon tax, it could result in substantial economic gains for the state and the world.

If any state in the USA is seeing the effects of climate change, it’s Florida, the state that banned their Department of Environmental Protection from using the term climate change. Instead of acting to remedy climate change, Ron DeSantis, the Republican governor of Florida, signed into law on June 21 a bill that will prevent cities from shifting away from fossil fuel sources. “If scientists are right, the lower third of the state will be underwater by the end of the century.”

Similar bills have been signed into law in other states, like Texas, a state that saw a record setting winter storm this past February. The freezing weather and failing energy grid were responsible for the deaths of more than 80 people.

Climate denial and the lack of addressing climate change is occurring in other countries as well. Many of the leaders in these areas refuse to stop their dependence on fossil fuels. Recently a ruptured methane pipeline poured gas into the Gulf of Mexico. The gas caught fire and it appeared that the ocean had a burning hole in it. The company responsible for this apocalyptic scene, Pemex, denied any long-term damage but it was reported that this pipeline could have been leaking significant amounts of the very potent climate change gas, methane, for a long period of time. No one is sure just what the carbon footprint of this rupture might be. It is unlikely that Mexico’s president Andrés Manuel López Obrador will hold the state-owned company responsible. He has embraced fossil fuels and referred to wind turbines as “visual pollution.”

Our neighbor to the north is in denial as well. Instead of preserving old growth forests which are known to sequester carbon dioxide, Canada is catering to the forestry industry. Canada’s boreal forests hold approximately 306 billion tons of carbon, “an amount of carbon that exceeds 36 years of global carbon emissions from burning fossil fuels.” Yet, Canada’s politicians are allowing nation’s forests to be clear-cut.

Contrary to what Senator Manchin thinks, we need an aggressive timetable to curtail the worst effects of climate change. We cannot afford to remain inactive. We cannot afford “all of the above” as energy options. Greta Thunberg has repeatedly said, “I want you to act as if the house is on fire, because it is.” 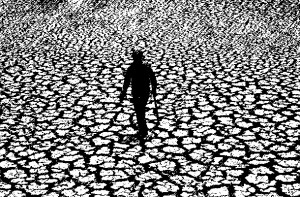