Public hearing on permit renewals for a coal sludge impoundment

Could a coal sludge disaster come to a community near you?

Five Months After the Sludge Spill

Life Near a Massey Mine is No Picnic

Since the late 1990s, Coal River Mountain Watch and the Ohio Valley Environmental Coalition have been raising awareness about this impoundment and challenging coal industry “regulators” to stop permitting the expansion of this behemoth lake of toxic goo. We’ve won some concessions along the way.  such as forcing Marfork to monitor the groundwater downgradient of the impoundment for dangerous heavy metals, such as mercury. The United Mine Workers of America is also gravely alarmed over the dangers this impoundment poses for miners and coalfield residents.

Before transporting coal to market, coal companies wash the coal. Up to 60 different chemicals, some of which are known carcinogens, can be used in the coal-washing process. The heavy metals that occur naturally in coal (mercury, arsenic, lead, cadmium, etc.) leach into the water used in the coal washing process. The slurry that results from the cleaning process is often stored in coal waste impoundments–sometimes with catastrophic results. There are alternatives.

Brushy Fork is only about half completed right now (see pictures below), and it’s size is already mind-boggling! At its final stage, the impoundment will hold over 8 billion gallons of coal-waste sludge! The dam will be 954 feet high–that’s 80 feet taller than the New River Gorge Bridge!

The sludge will eventually fill this area 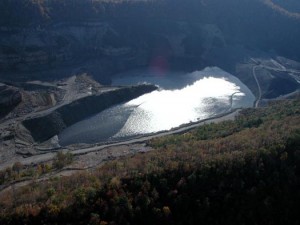