Chemical production in the USA is big business; in West Virginia it is number one. Chemical companies like Union Carbide, DuPont and Monsanto have made the Kanawha River Valley, dubbed “cancer valley,” known for its chemical production and its pollution. If the proposed Appalachian Storage and Trading hub/ petrochemical complex becomes a reality in the Ohio River Valley, Ohio and West Virginia residents will be dealing with a new source of water and air pollution and facing the possibility of becoming the next cancer valley.

Since the slogan “better living through chemistry” was first adopted by DuPont in 1935, people have been led to believe that chemical compounds in consumer products are safe and well tested. We have also been convinced that we need all these products to make our lives happy and fulfilled.

We need a spray to take the smell out of our couch; the couch that has been treated with C-8 containing Teflon to make it waterproof. We need multiple hair products. We need a barrage of make-up. We need laundry detergent, drier sheets, laundry bleach, fabric softener, wrinkle release. We need air fresheners that puff chemicals into the air every 15 minutes in our homes and work places. We have to have body sprays, foot sprays, hair sprays, perfumes, and deodorant sprays. Our garages could often qualify as “superfund sites” for the plethora of lawn and automotive chemicals they contain.

Residents of West Virginia were recently told by representatives of the West Virginia Manufacturers Association that it was okay for them to be exposed to more industrial chemicals in their water. The reason: West Virginians are heavier than the average American.

There are currently 80,000-plus chemical compounds in circulation in commerce. Today, the EPA’s Toxic Release Inventory data reveals that in the USA alone, 5.2 billion tons of toxic chemicals are released each year into our air, water, and land.

The National Institute of Environmental Health Sciences reported that Americans have 441 synthetic compounds in their bodies. Of those, 79 are known to cause cancer, mutations, or developmental disorders.

It has been more than fifty years since the publication of Rachel Carson’s book, Silent Spring. She tried to warn us of the use of pesticides and their impact on humans and the ecosystems we inhabit. Unfortunately, we didn’t heed her warning and today we are exposed to more toxic chemicals than ever.

What about all those government agencies formed in the early 1970s that were supposed to protect us? We have better methods for detecting cancer and better options to treat it, but we still cannot prevent it. Most cancer rates have gone up, not down. The United States has one of the highest cancer rates in the world according to the World Cancer Research Fund. So how did this happen?

The United States evaluates chemicals using a very different mindset than most other countries, especially those in Europe. Europeans use an approach often referred to as the “precautionary principle.” In her book, Pathways to our Sustainable Future, Patricia DeMarco does an excellent job explaining this principle. Europe’s regulatory system uses techniques described by the acronym REACH. They register chemicals, evaluate them, authorize them, and restrict chemicals based on their findings. The manufacturers of these chemicals have the responsibility to prove their safety before they are ever used in consumer products or our homes. If they are deemed too dangerous, a safe substitute must be found.

Unlike Europe’s model, the precautionary principle, industries in the USA do not bear the burden of proof of chemical safety. Our system “allows the production and sale of chemicals as long as there is no direct ‘proof’ that they are harmful.” In many cases, such as in fracking fluid, industry uses the loophole of “proprietary information” to avoid sharing data. This leaves safety testing up to government agencies or consumer advocates like the Environmental Working Group. The EWG has an excellent website with product information and testing results.

Another loophole often used by manufactures is that instead of listing all toxic chemicals in the ingredients list, they use the generic label “fragrance”, which the manufacturer can claim as proprietary information. The documentary “Stink” takes the viewer on a dad’s journey as he tries to find out what chemicals are used on his daughters’ sleepwear. The company repeatedly avoids giving the concerned father data about the compounds responsible for the smell on his daughters’ pajamas. He eventually has the sleepwear testing by an independent testing company and discovers they are using banned toxic chemicals for fire resistance.

The Environmental Working Group has also pointed out that fragrance ingredients can be toxic. Xylene is used in many fragrances and it is a known toxicant and registered by the Agency for Toxic Substances and Disease Registry (ATSDR) as a nervous system toxicant. That apple scent on your drier sheets; that clean smell of your candle; or that homemade apple pie odor in your air freshener; each can be an allergen, hormone disruptor, carcinogen, or an asthma-trigger. according to data on SafeCosmetics.org.

The International Fragrance Association lists 3,059 chemicals currently being used in fragrance compounds. The Food and Drug Administration does not have the authority to require manufacturers to disclose these compounds. The standards followed by the industry, an industry that makes nearly 76 billion dollars a year, are basically voluntary.

With the exception of color additives, the FDA said that cosmetics makers can “use any ingredient and market the product without their approval.” The only banned substances in cosmetics are: bithionol, mercury compounds, vinyl chloride, halogenated salicylanilides, zirconium, chloroform, methylene chloride, hexachlorophene, and CFC propellants.

The actions taken by industry to avoid releasing data on chemicals that are in their products are not new. Pesticide makers have been using the term “inert” since 1947. Many times customers will read a product label and at the end see the word “Inert.” The term has been used often by pesticide companies who will label active ingredients and then follow those compounds with one word: inert.

Peter Montague, author of Many Pesticides, Little Knowledge, said there are more than 20,000 different household pesticide products using over 300 active ingredients and over 2,300 inactive ingredients classified as inert. According to the Federal Insecticide, Fungicide, and Rodenticide Act (FIFRA), the disclosure of proprietary pesticide ingredients is prohibited and inert substances do not have to be listed on the labels. Many so-called inert ingredients are not inert but are potentially toxic or have unknown toxicity. The EPA recognizes that “many consumers have a misleading impression of the term ‘inert ingredient’ believing it to mean water or other harmless ingredients.”

So what’s a consumer to do? First, question the need for product. Do you really need air fresheners puffing unknown compounds into the air? Do you need chemical products to kill every weed and every bug in your yard? Do you need all those scented cleaning products when my mom’s basic arsenal will do?

There are safer alternatives and the internet is full of consumer guides to these. Educate yourself. I am learning about these issues every day and continue to make changes to my lifestyle to eliminate these toxins from my life. “Better living through chemistry” is truly misleading.

We certainly do not need the Appalachian Storage Hub or the pollution that will come from additional fracking, plastics making cracker plants, and the petrochemical plants that will follow this development. It is time for a new vision, one that will promote sustainable economies, safe jobs, and safe products. 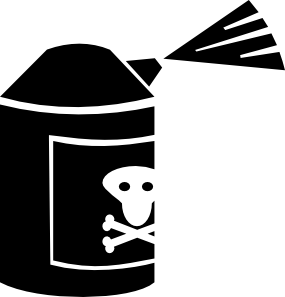