More and more these days, I’m beginning to believe that I live in “upside-down” world, the Bo-Zone Layer (thank you Far Side cartoons) or some other convoluted universe. And West Virginia may just be the center. 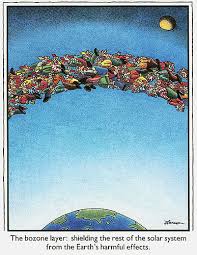 I’m trying to wrap my mind around the fact that the Michael Callaghan, former chairman of the Democratic Party and former Director of the WV Division of Environmental Protection, is suing WV Secretary of State, Natalie Tennant (Democrat) and the state Election Commission in federal court, claiming that the matching funds provision of the Supreme Court’s public campaign financing pilot program is unconstitutional. (Matching or “rescue” funds allow a publicly funded candidate to receive additional funding for his/her campaign once a participating candidate passes a spending threshold or is targeted by an independent campaign.) Callaghan’s reasoning? He says since he supported both Democratic candidates for office that he filed this case to keep West Virginia taxpayers from financing a candidate he opposed. He also pointed out that the U.S. Supreme Court (SCOTUS) has ruled that matching funds provisions are an unconstitutional infringement of the First Amendment rights of candidates and contributors. His arguments are based on the Supreme Court’s 2011 ruling that said Arizona’s public financing system substantially burdened the free speech of privately financed candidates and independent expenditure groups despite evidence to the contrary. I could rant about my view of the twisted logic that led to that ruling, but will save it for some other time.

Regarding the Arizona Free Enterprise ruling, SCOTUS held that the triggered matching fund provisions of Arizona’s public financing system substantially burdens free speech of privately financed candidates and independent expenditure groups without fulfilling a compelling government interest. In an amicus brief we signed on to in a similar case in Wisconsin, one argument stated that judges, unlike other elected officials, have a duty, under the Constitution’s 14th Amendment, to be impartial. Therefore, reforms to prevent the appearance of courtroom bias represent a compelling government interest.

Of course, the court’s ruling said the anti-corruption interest wasn’t furthered because candidates couldn’t be corrupted by their own money (which is I guess someone could argue in this case since Davis and Chafin are largely self-financed). However, the ruling also said that independent expenditures were not corrupting because they were not coordinated with the candidate. Please! This is the bizarro world we live in.
My initial reaction: “You, too, Democrats?” For years, the effort to enact a bill for public financing of elections in West Virginia has largely been impeded by Republicans in the legislature — though fortunately, some in that party saw the benefits of “voter-owned” elections. Now, it appears that Callaghan’s smarmy action was taken on behalf of a few Democrats’ special agenda. The lawsuit by Callaghan reeks, especially since it was filed by the attorney for a current Democratic Supreme Court candidate.

Here’s where I’m further stymied. Since 2000, when a bill for public financing of was introduced in West Virginia, the Democrats have been primary supporters of this concept — in fact they were the champions of this measure when the pilot project passed in 2010. What a way to breathe fresh clean, air into the WV Supreme Court after the two black eyes it received! I’m referring to the Court’s appearance of corruption when former CEO of Massey Energy Don Blankenship personally funded, to the tune of about $3 million, the campaign of then no-name candidate, Brent Benjamin. Benjamin unseated Justice Warren McGraw thanks to a shadowy “And for the Sake of the Kids” independent ad campaign funded by Blankenship.

You can read more details about that nasty judicial campaign here:  http://americanradioworks.publicradio.org/features/judges/

Then, photographs of Blankenship and then-sitting Chief Justice, “Spike” Maynard vacationing in Monaco appeared as front page news in a national newspaper at a time when Massey Energy had a $50 million judgment before the Court brought by Harman Mining Company. (Just rehashing these incidents makes me want to run for the shower!)

In all this political confusion, where do West Virginia voters stand on this issue? A 2010 poll of likely voters in West Virginia conducted on behalf of Justice at Stake and the Committee for Economic Development showed that over two-thirds of voters see contributions to Supreme Court candidates as a serious problem and more than three out of four believe that these contributions influence a judges decisions. These sentiments cut across party lines. In addition, the poll revealed strong bi-partisan support for public financing of West Virginia’s Supreme Court elections. If ever a state and an office needs of a campaign system that reduces the appearance of influence or worse, it’s the West Virginia Supreme Court. This pilot project was open to all political parties in the state — Democrats, Republicans and Mountain Party candidates, although only a Republican took advantage of it.

On the brighter side, the West Virginia Elections Commission unanimously decided to defend the “rescue” funds provision in pending state and federal lawsuits. Stay tuned. Maybe, just maybe they will save this much needed public funding system and help restore some voter confidence in the election process and the West Virginia Supreme Court.