What Happened and How

I think it is safe to say that, in light of my well-known activism in documenting all things Marcellus, I am not your average Wetzel County surface owner. I have more than 10,000 photos of Marcellus operations here in Wetzel and I document every aspect of these operations, frequently contacting many state agencies and many of the gas operators directly. I knew which gas company was responsible. If this was intentional, both EQT and I would have a problem. If this was some kind of mistake, then only EQT would have a problem. But I could not fathom how this happened.

Fortunately I knew exactly who to contact at EQT in Pittsburgh.

And to their credit, the person I contacted at EQT immediately responded. It took most of the day to track down what had happen and I was told that the next day they would be out to remove the stakes and pins. The short story was that it was all a simple mistake. But a 4,300 foot long mistake. But still just a mistake. The long story follows.

The EQT representative assured me that someone would be out to remove their stakes, flags and the steel pins. I told them that they needed to be prompt and that I would not alter or move their property, and their locating points. The next day, when I got home the stakes with flags were gone, and just a small bare patch of dirt remained near my white plastic fence post marker still stood. It looked good. However, since I am a well-cultivated skeptic of long duration and also a strict adherent to the old Russian proverb, made famous by President Reagan, “Trust but Verify.” I grabbed the garden trowel shown below, dug around a bit, and clink, clink, steel on steel. Guess what. The cosmetic improvement proved rather shallow, literally. The steel pin had just be driven deeper, to look good. Just waiting for my tiller to locate someday. I profusely re-painted the pin, and photographed it and proceeded to send another somewhat harsh and very clearly worded e-mail to EQT. The pin was removed the next day. 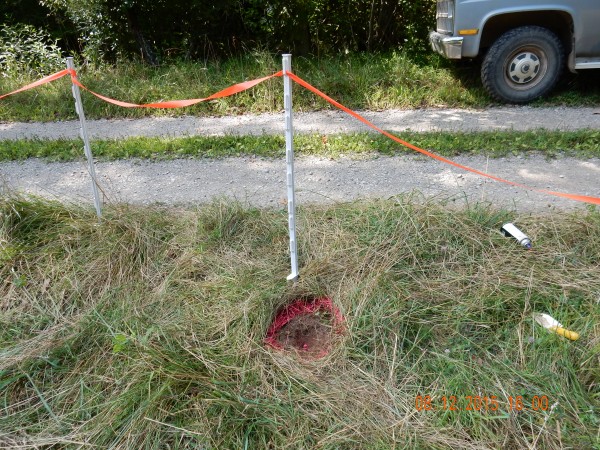 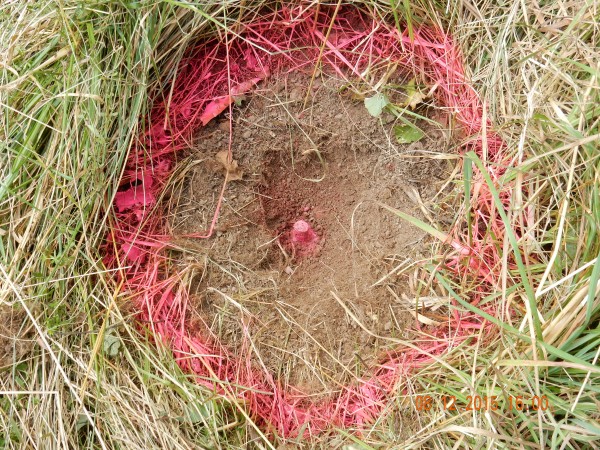 After all the stakes, ribbons, and steel pins were removed, EQT provided further insights into the bigger picture. Multiple pipeline routes were being evaluated by EQT. Gas companies always consider a wide range of constraints to pipeline construction such as road and stream crossings, available access roads, permission and cooperation of the many landowners, steepness of the terrain, etc. At a certain point in their evaluation, EQT chose a final route, but for unknown reasons the surveyor crew was given the old, now-abandoned route on which to establish a control point. The overall error can be seen on the map below, where the bright blue line is the original path of the OVC pipeline through my property, and the red line shows where the pipeline would go, if FERC approves it. A new control point has now been established near the highway where the pipeline would cross, if approved.

So, what are the lessons to be learned from all this? Find out in Push for Pipelines – Part 5, coming soon.