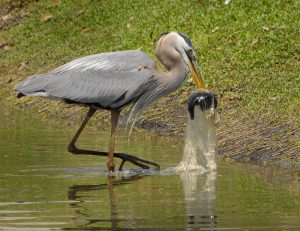 Last week, I was working with a great group of community members interested in working on a plastic bag ban.

Spoiler Alert: Before we go any further, I think it is only fair to reveal to you, the reader, that this story has no happy, redeeming ending. A band of a few committed citizens did not battle against all odds and enact a plastic bag ban in their small, conservative, steel river valley.  It doesn’t even have a mediocre ending with no ban enacted but lessons were learned, and all became empowered to fight another day. This story has the worst ending, the one that has no closure and offers more questions than answers. Still with me? Great. Let’s get to it then.

That week, as I was contemplating how to structure a plastic bag ban initiative (and the snowball’s chance in hell it had of succeeding), I was also listening half-heartedly to the news. I started listening more intently as the reports from Baton Rouge, Louisiana, St. Paul, Minnesota and Dallas, Texas unfolded.

Powerful footage of demonstrators in #StPaul who marched to protest the police killing of #PhilandoCastile last weekhttps://t.co/RvigcG1uNa

If you’ve been in the environmental field for awhile, you’ve been in this moment many times, asking  – Why, in the name of all that’s holy, are we talking about plastic bags, rain barrels, solar rooftops…etc, when so many amongst us are acutely, immediately, and continually under siege from poverty, racism and violence?

Usually, in a very short matter of time, I can answer my own question.  (Like I said, we’ve been here before.) Environmental issues are justice issues at their very core. Certainly, plastic’s life cycle, from petroleum cradle to air/waterway graves, critically impacts low income communities more powerfully than more affluent communities. Environmental justice is not just a nice catch phrase. It’s a life and death matter. No reasonable person can question that.

Yet, sometimes, the well-rehearsed talking point answers that I have always honored and still whole-heartedly believe seemed lacking, if not downright offensive. Why is it that this recent tragic sequences of events, has become so hard for me to move past?

I know the answer is that we all need to keep working on what we do best to move us all forward, but right now, I can’t bring myself to work on the plastic bag ban. Instead, I wonder how best to prioritize and connect with others whose pain is so deep and needs so immediate.

So, I’m left with many questions. I wonder why, in spite of our best efforts, most of our poorer and minority communities still feel alienated from the environmental community? I wonder what I can do to change this.

I wonder why I’ve done such a miserable job of engaging our under-served communities in environmental programs? I wonder if I chose to focus on issues like new energy systems and climate change because I like being once removed from the in-your-face, savage violence of poverty and discrimination?

Do plastic bag bans matter to disenfranchised communities? Of course they do. But on the scale of Black Lives Matter, and the frightening violence against all humanity, all else seems to pale in comparison.

I know, in the end, I will continue on both fronts, but I wonder if I should be putting more time fighting the visceral hate and xenophobia the global community is practicing right now, and less time fighting plastic bags.

Last, I can’t help wondering if you also wonder.

Mary Ellen Cassidy’s professional background is in education and research focusing on issues related to fossil fuel impacts on watersheds, and solution-oriented energy systems. Cassidy currently serves as the coordinator of the New Energy Economy with WALS (Wheeling Academy of Law and Science), facilitator of the Wheeling Green Table and Wheeling Solar Co-op, and member of the City of Wheeling’s Sustainability Working Group.