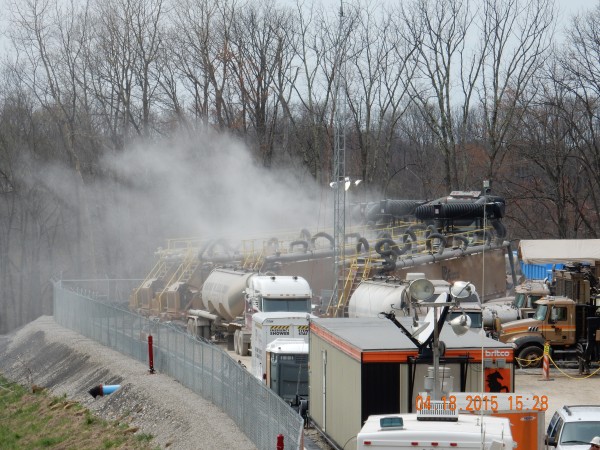 Folks in northern West Virginia advise you to expect air (in this case, deadly silica dust), noise and water pollution if fracking operations move into your area. Photo by Bill Hughes.

Folks in Putnam County might want to know that our neighbors in north central West Virginia have experienced an assault on their land, air, water, health and way of life with the rapid rise and expansion of fracking, waste disposal and associated infrastructure. See www.wvhostfarms.org.

Property values decline rapidly when fracking operations move in to an area. Already in northern WV, some landowners have reportedly not been getting the royalties they expected.

The U.S. Energy Information Administration says the amount of recoverable natural gas in West Virginia jumped by 7.94 trillion cubic feet from 2013 to 2014.

Corky DeMarco, director of the of the WV Oil and Natural Gas Association pointed to the deep Utica Shale formation, and the new information on the very deep Rogersville Shale, stretching from the general vicinity of Huntington to Parkersburg.

“It’s pretty darn exciting, if we have somewhere to put it all,” DeMarco said. (The Wheeling Intelligencer, Dec. 4, 2015).

Oil and gas prices are low and the U.S. gas market is glutted. Plans are underway to ship more fracked gas overseas as new export terminals are scheduled to open in the next few years. The industry hopes this will boost demand and make fracking profitable in Putnam, Wayne and Cabell counties’ deep Rogersville Shale, where industry sources say that a mineral rights “land grab” has occurred.

Plans are already underway for shallower fracking for oil in an “underdeveloped” portion of Kanawha County, at 2,150 feet deep, in the Weir Sandstone. (Natural Gas Intelligence’s Shale Daily, Jan 12, 2016). In nearby Greenup County, KY, three fracking production wells are now being developed in the Berea Sandstone, also at around 2,100 feet deep. Neighbors were completely surprised when the heavy equipment and man camps moved in.

New, stricter regulations are in place or underway in other major states where fracking is underway, as well as growing numbers of lawsuits from citizens, and in Pennsylvania, from the state itself (this lawsuit alleges that Chesapeake Energy cheated PA landowners of millions of dollars in royalties).

In WV it would seem cheaper to operate as state officials are bending over backwards to make things easier for fracking companies to profit here. The state gave Cabot Oil and Gas three years of secrecy on their now-operating Rogersville well in Putnam County, in the Amherst-Plymouth Wildlife Management Area. Cabot alone now controls at least a million acres of mineral rights in Southwest WV.

A second Putnam County Rogersville test well has been permitted at 14,000 feet deep. The well is south of Winfield, on Blue Lick Road.

The Rogersville Shale – Formerly Thought of as Too Deep to Frack

According to the U.S. Geological Survey, the old 11,000 foot Wayne Co. Exxon test well “has good source rock potential, that, combined with favorable oil-source rock correlations, demonstrates a new petroleum system in the Rome trough” (of the Rogersville Shale). Just across the Big Sandy River in Kentucky, at least two fracked Rogersville oil and gas wells have already been permitted. Rogersville test wells there are up to 15,000 feet deep.

Industry spokespeople say that in Kentucky, the Rogersville is thought to have oil. In WV, at a depth of 12,000-14,000 feet, the formation is thought to be primarily gas.  Wayne County WV, where the “new petroleum system” was found, is on the border between the two states.

According to NOAA, the highest methane level on Earth is now (January, 2016) over Oklahoma, where fracking waste disposal wells are already associated with unprecedented numbers of earthquakes. If fracking is confirmed as the source of this methane level, that will show that the production and use of fracked oil is not climate friendly.

The Marcellus Shale is being fracked at around 5,000 feet in north central WV and has transformed rural areas into heavy industrial zones. At depths up to 15,000 feet, the impacts from Rogersville fracking would be much worse.

Oil prices are very low at this time. The industry hopes that new federal legislation making it legal to export U.S. oil will make it profitable to develop more fracked oil wells in this country. (This provision was slipped into the new federal Budget Bill.)

More pipelines would be needed to move fracked oil and gas out of our region. Columbia Gas’ hoped-for Mountaineer XPress pipeline would run through Cabell, Putnam and Wayne counties.

In Cabell County, at Milton, the proposed 36-inch pipeline would tie into an old existing pipeline. When asked about the age of this pipeline, Columbia Gas officials said that it was somewhere around 30 to 60 years old. The proposed terminal point for the Mountaineer Xpress pipeline is in Ceredo (Wayne County), at a compressor station close to the Huntington airport.

If you are approached by oil and gas land agents, don’t sign anything until you see a good lawyer. People have been cheated. 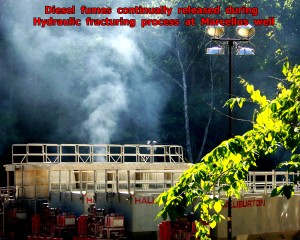