In 1990, Dr. Louis Guillette, an endocrinologist from Florida, testified before Congress, telling the U.S. House of Representatives Subcommittee on Health and the Environment “every man sitting in this room is half the man his grandfather was.” This was in reference to worldwide studies showing that sperm counts had dropped nearly fifty percent in the past fifty years.

At the time, Dr. Guillette was studying alligators in Lake Apopka, Florida. He found that their sexual organs were a fraction of normal size. You may be asking, why would anyone even think to chose this as a topic of study?

The study was initiated when researchers discovered that the lake, once a major breeding area for alligators, had gone from having over 2000 alligator sightings a night to less than 150. Additionally, when alligator eggs were collected from the nests and hatched in the lab, only one fifth of the eggs hatched and of those only fifty percent produced healthy baby alligators.

I had the chance to meet Dr. Guillette while he was presenting his work at a conference about the effects of pesticides on reproduction. He, along with many other scientists, had found that pesticides can often mimic estrogen and lower the levels of testosterone in many species. Simply put: the animals around Lake Apopka were being demasculinized.

The cause of this demasculinization was thought to be a spill of the pesticides DDT and dicofol in 1980. Researchers deduced that animals living in and around the lake had acted like sponges, absorbing the chemicals into their bodies. Apopka’s male alligators had poorly developed testes and underdeveloped penises. 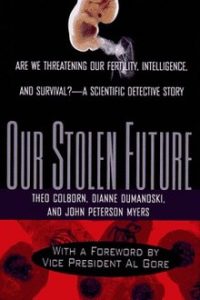 Dr. Guillette along with Dr. Theo Colborn, founder of the Endocrine Disruption Exchange and author of Our Stolen Future: Are We Threatening Our Fertility, Intelligence and Survival, pointed to the steady rise of the use of chlorinated organic hydrocarbon based pesticides as a cause in declines of human sperm counts and fertility rates worldwide.

Unfortunately, the molecular structure of many man-made compounds look remarkably similar to these hormones. They can either block the site from hooking up with the needed hormone, like putting the wrong key in a door lock, or they can fit into the lock and trigger erroneous sexual development.

LIke the famous biologist, Rachel Carson, who made the link between these compounds and health effects, Dr. Colborn was the target of much industry backlash when her book was first published. She was not alone in sounding the alarm of what our massive dependence on pesticides and organochlorine compounds might be doing to our endocrine systems. Doctors and scientists all over the world have been studying this issue and seeing similar results.

Pesticides are not the only compounds that can wreak havoc with our ability to reproduce. Scientists are now finding that many other chemicals can have similar effects on estrogen and testosterone levels in humans.

Bisphenol A (BPA) is one such chemical. BPA is used to make polycarbonate plastic and epoxy resins. This compound is widely used in industry and can be found in dental sealants, food and beverage can linings, and water bottles. It has been shown to have estrogenic activity and can interfere with the endocrine system, affect puberty, ovulation, and even cause infertility.

A study in Environmental Health Perspective reported that this chemical was found in 95% of adult urine samples in the USA. A recent report in Scientific Reports showed that BPA can bind to receptors on sperm and alter sperm function.

We are now being exposed to BPA via our store receipts. EcoWatch recently found that nine out of ten retail stores use thermal receipt paper that is coated with a powder form of 60-100 milligrams of BPA. This powder can be absorbed immediately into the skin giving us an exposure 1000 times more potent than that received from eating canned foods.

Some retail stores have switched receipts and are using bisphenol S, but this compound, like BPA, is just as bad or maybe worse for causing health problems. Best Buy and Trader Joes are going to use BPA and BPS free paper. Other alternatives for consumers could be to go receipt free and opt for online receipts.

More than 130 chemicals (such as benzene, toluene, and xylene) that have been used in fracking are known or suspected endocrine-disrupting chemicals. A study done by the Endocrine Society found that exposure to many of these chemicals can lower sperm counts.

Dr. Guillette once said, “we are drowning in a sea of estrogenic compounds.” It is no surprise that testicular cancer rates have tripled in the past thirty years or that prostate cancer has doubled in the past decade. The chemicals that we are spreading across the planet now threaten our very ability to reproduce.

Dr. Colburn suggested “we revisit every piece of legislation” to make sure we include not only cancer as a risk element but also transgenerational health effects, and health effects on the endocrine, immune, and reproductive systems.

Politicians and investors who are promoting the concept of the Appalachian Storage Hub and Petrochemical Complex would do well to slow down and really think about the enormous costs to human health we would face if this latest fossil fuel boondoggle should ever become a reality. We deserve better than this “vision” for our future, as do future generations. 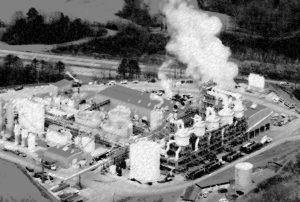