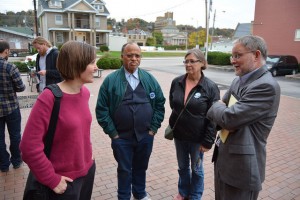 Here’s some of the news coverage of that event:
Customers speak out against American Water rate increase
Dozens Object To Proposed WVAW Rate Increase At Public Meeting
Residents speak out on WVAWC rate hike request at Charleston PSC hearing

And below are the impassioned comments from Joe Solomon,one of those residents who spoke out. Joe is a volunteer with Advocates for a Safe Water System.

My name is Joe Solomon.

First up. I’d like to introduce myself. I was a co-founder of the WV Clean Water Hub, the people-to-people network of volunteers that brought clean water, in bottles, in tanks, in whatever shape we could, to as many people as we could starting the morning after the spill. Along with other volunteers, I walked into countless hollers — especially to the outer-lying counties like Boone that were nearly forgotten, and down countless streets in Nitro and the just as nearly forgotten rims of Charleston, and we carried water. Door to door, we brought water. 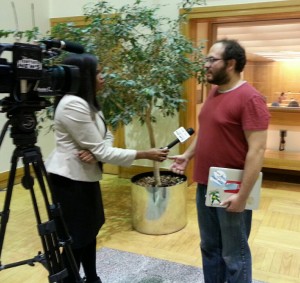 Joe Solomon speaks with a TV news reporter at the PSC hearing. Photo by Gary Zuckett.

On those journeys, I discovered many beautiful people — people who felt betrayed, confused, and mothers and fathers who just wanted to keep their kids safe. I met one dad who would shower in the MCHM-laced water, earning red welts on his back, but make sure his infant daughter could bath in the limited bottled water they could acquire. I met  guardian angels who would receive our water and in turn bring it to elders in their neighborhood who were housebound. We met wonderful people in fire departments and churches – out there doing water deliveries like us.

I saw a lot of great volunteers and a resilient people. I saw what you see in disasters: compassion, and the brighter sides of humanity.

But I want to tell you what I never saw: what I never saw once. I never once met a WV American Water worker out there, helping people get clean water. Like we were. Like so many were. They were nowhere, absolutely nowhere to be seen.

To me, this just speaks to a lack of humility.

It speaks to me of an unapologetic, inept, disconnected greed — the same kind of arrogant greed that’s asking that for this 28% rate increase. It draws from the same well.

And look: Not having humility isn’t a sin — it’s not — unless you’re in the habit of poisoning hundreds of thousands of people, while letting your entire pipeline system go to rot, with main breaks week after week after week. It’s then that arrogance becomes a deal breaker.

It’s not rocket science. We need a public water system. We need to revoke this greedy, inept, arrogant company’s charter. We need this public commission to show some basic leadership, and not play to these negotiations, but do your job, and show them the door. And assuming leadership is tough to come by, the very, very, very, very, very least you can do is deny WV American Water’s outrageous rate hike. 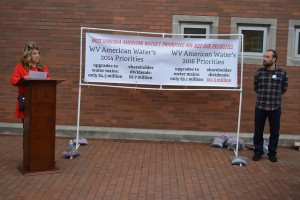