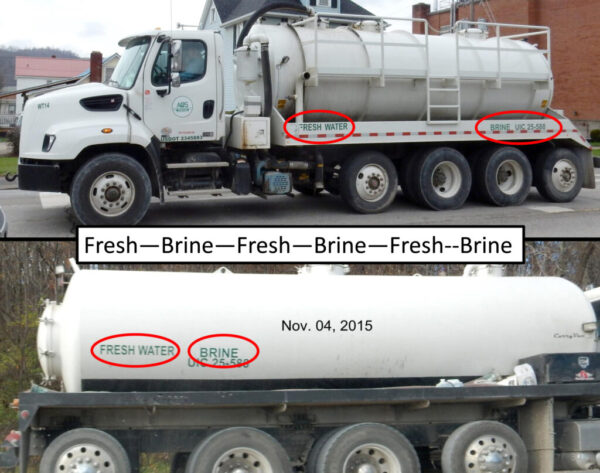 The amount of wastes from high pressure horizontal fracking is increasing because more water is being used to frack wells. This is due in part to the relatively new “super laterals” drilling technique, which allows drillers to frack three to four miles into the shale deposits.

Although these wastes have never been regulated under federal laws, new investigations are proving that oil and gas wastes have always contained high levels of radionuclides (radium isotopes).

A two-year investigation by environmental journalist, Justin Nobel, “America’s Radioactive Secret,” has recently been published in the Rolling Stone magazine. What he reveals about oil and gas workers’ exposures is very disturbing. If you live in the fracked-areas of our region, you likely often see tankers on our roads with “brine” labels (often also with the “fresh water” label, as in the photos above from a Bill Hughes PowerPoint). The tankers, which hold about five thousand gallons of liquids, more often than not contain many more substances than the benign “brine” label would suggest.

At a recent presentation in St. Clairsville, Ohio, Nobel informed a packed audience of his discoveries made as he crossed throughout the Appalachian region talking to oil and gas workers and other members of the public.

The wastes he spoke of are generated by both vertical well drilling (conventional) and high-pressure horizontal fracking (non-conventional).

Dr. Julie Weatherington-Rice, a Ph.D. Geo-hydrologist, introduced his presentation by explaining to the audience how radiation got into the shale deposits. Her detailed earth-science based discussion enlightened the attendees as to the role nuclear decay played in warming our planet. However, the same radiation that warms the crust, can significantly harm life when brought to the surface of the planet, as it is being done during oil drilling.

A 2018 report from Science Daily shows that there is an interaction between the “chemical slurry” used for fracking a well and the ancient shale located deep below the earth’s surface. Millions of gallons of water, sand and chemicals are pumped into the ground to break up the rock strata. When rock in the Marcellus Shale region comes into contact with the slurry, radium within the rock and the clay minerals leaches out. The clay leaches out radium-228 and the organic (carbon heavy) materials leach out radium-226.

Two radionuclides found in oil and gas wastes are radium-226 and radium-228. The half-life for radium-226 is 1,600 years and is 6.7 years for radium-228. Each radionuclide releases energy as they decay into radon gas. “Radium can enter the body when it is inhaled or swallowed. Radium breathed into the lungs may remain there for months; but it will gradually enter the blood stream and be carried to all parts of the body, with a portion accumulating in the bones.” It can cause bone cancer and other diseases. Radon gas is the leading cause of lung cancer in non-smokers.

The issues with radioactivity in oil and gas wastes is not new. In 1990, an article in the New York Times told the story of how, for decades, this industry pumped millions of gallons of radium-containing wastes from oil wells all over the country. The wastes were routinely stored in unlined ponds and then pumped into the ground or into wetlands.

Dr. Paul Templet, the Secretary of the Louisiana Department of Environmental Quality said in 1990, “the oil and gas industry can no longer use the environment as a free disposal system.” But they continue to do so today.

Wells tested in Louisiana in the 1990s contained oil-water mixtures with radiation levels five to thirty times higher than what was allowed to be released from nuclear power plants. These power plants are very regulated and workers are required to wear protection. That New York Times article said the oil industry is “wholly uncontrolled.”

The oil and gas industry chose to dispose of wastes in abandoned wells saying, “it is safer and less expensive than shipping and storing the wastes at a cost of $300 to $500 a barrel.” The storage site in Utah is the only repository for storing this naturally occurring radioactive material, known as NORM.

Why are the oil and gas industry’s disposal methods for radioactive wastes not regulated like other industries? The answer is, in 1978, Congress exempted oil and gas wastes from being regulated under the Resource Conservation and Recovery Act (RCRA). Then in 1988, an additional regulatory determination stated that “control of petroleum wastes under RCRA Subtitle C is not warranted.”

This does not mean that these wastes can’t be regulated under state laws. However, my home state of Ohio does not choose to do this, even though the RCRA document states, “the exemption does not mean these wastes would not present a hazard to human health and the environment if improperly handled.”

In fact, many communities and agencies are expressing concerns over these wastes, not only about the radioactivity, but also about the toxicity of this hazardous mixture. A 2016 report by the Partnership for Policy Integrity reported that first responders and the public have little to no access to the long list of chemicals that could be found in wastes spilled from tankers and leaked onto the land. Often there are no safety data sheets and companies claim “trade secret” information when denying access to formulations of wastes and fracking fluids.

The Rolling Stone article brings attention to the disturbing fact that neither the federal government nor Ohio’s Department of Natural Resources regulates the waste from conventional or non-conventional oil and gas wells.

In the article, an oil and gas worker describes some of the symptoms he has seen: “A lot of guys are coming up with cancer, or sores and skin lesions that take months to heal.” He says he  “experiences regular headaches and nausea, numbness in his fingertips and face,” and “joint pain like fire.” These workers are often saturated with the radioactive brine.

One worker was able to collect 11 samples of brine from different tankers. He gave these samples to the Center for Environmental Research and Education at Duquesne University, which then had them tested at the University of Pittsburgh’s lab.

The Nuclear Regulatory Commission requires industrial discharges to remain below 60 picocuries per gram but four of the eleven samples had combined radium levels (radium -226 and radium -228) above 3,500 picocuries and one was more than 8,500. Brine truck drivers as well as other oil and gas workers should demand dosimeters and personal monitoring.

Testing done by the Ohio Department of Natural Resources has shown dangerous levels of radium-226 and radium-228 from conventional oil and gas wells. But this brine has been used by ODOT districts in at least 28 counties and by many cities and townships as a deicing agent on Ohio roads according to the Buckeye Environmental Network (BEN).

The ODNR has been spraying this waste on our roads for years, even though they have known since 2017 it has Radium levels thousands of times over the limits, as reported by BEN.

Yet, Ohio’s lawmakers continue to put forward legislation, like HB 393, to encourage and aid the sales of this waste brine throughout the state. But, now their “dirty secret” is out and citizens are demanding the regulation of radioactive brine. If you think your local township is using brine from oil and gas you need to let them know that this is not safe.

Hoots and Hollers  Feb 6, 2020
Your Rights at Stake: Come to Public Hearing on Anti-Protest Bill