“The first priority and concern of all in the coal mining industry must be the health and safety of its most precious resource — the miner.”

A Center for Public Integrity reporter, Chris Hamby, conducted a yearlong investigation into the failed Black Lung Benefit package awarded to disabled coalminers in 1969 legislation. ABC News and Nightline aired a form of this three-part series revealing startling, unethical measures used to help defeat the miner and his widow in their weakest hour. These methods, driven by money from coal companies, involve the biggest and oldest law firm in West Virginia, Jackson- Kelly and a renowned medical center, John Hopkins University. Actions by these revered groups were clandestine and protected by politician and policy.

After this report was aired, John Hopkins University suspended its Black Lung Reading Division, pending an investigation. Dr. Paul Wheeler, who is head of the division in charge of reading black lung x-rays from the coalfields in recent court testimony, said the last time he recalled finding a case of severe black lung also known as complicated pneumoconiosis — a finding that would automatically qualify a miner for benefits under a special federal program — was in “the 1970s or the early 80s.” The Center reviewed 1,500 cases decided since 2000 in which Dr. Wheeler, head of their prestigious Black Lung X-Ray Reading Division, read 3,400 x-rays and did not find one single case of complicated black lung despite biopsy or autopsy-proven black lung in more than 100 of those cases. Dr. Wheeler is currently on leave.

Filing for Black Lung Benefits is a long hard road and many of the miners die before a decision is reached. The rules seem to favor the coal companies even though the law was intended to help the sick miner or his widow. It’s all about money, not about a miner suffering from black lung who worked 25 plus years digging coal for a company, being loyal to that company and having high work standards. None of those things count when the miner begin having shortness of breath, losing strength in his once strong arms and legs, suffering from panic attacks when in close-quarters because he can’t get a breath, hacking up black phlegm. A Department of Labor Certified Doctor tells the miner he is suffering from complicated coal workers’ pneumoconiosis — Black Lung. He is lucky to find a lawyer and since he’s being busy keeping the legal eagles and doctors warm and their offices well lit as well as the rest of this country, he hasn’t had the time or resources to attend law school himself.

Often these claimants are assisted in filling out the initial paperwork by lay representatives who work out of Black Lung Clinics. The miner, already losing ground because of his deteriorating physical condition, begins the endless struggle with only his wife in the courtroom by his side. He is examined by more doctors paid by coal companies and quizzed until his brains are fried by lawyers paid by coal companies. In the event the miner wins a round or two, coal companies can appeal and it all starts over. In the rare event a miner is awarded benefits and the coal company appeals and wins, the miner must repay those benefits unless the miner can prove hardship.

Black Lung is a debilitating disease caused by inhaling coal dust. There is no cure. It can be fatal. It is preventable. Dust levels are regulated by law. Congress made a promise in 1969 that mining companies would have to keep dust levels down and Black Lung would be no more. Numbers decreased until the late 1990s. NIOSH data reflects a resurgence in black lung in epidemic proportion particularly the most severe, fast-progressing type and occurring in younger miners in the “hot spots” in Central Appalachia.

The fine particles of coal dust breathed in by coal miners cannot be destroyed within the lungs, nor removed. The particles build up causing thickness and scarring and so the lungs become less efficient in getting oxygen into the blood. As the disease progresses, the miner may develop an enlargement and strain of the right side of the heart which may result in heart failure. Some miners develop emphysema, a disease in which tiny air sacs in the lungs become damaged, leading to shortness of breath, and respiratory and heart failure as a complication of Black Lung disease. Black Lung is a progressive disease in which damage can spread throughout the lungs even after exposure to the dust has ended.

Black Lung is a debilitating family illness. Depression, anger and resentment are symptoms miners exhibit which may not be listed on the chart. The pain and agony of watching a love one suffocate to death is something not soon forgotten by family members. And to have an organized group of well-educated professionals working around the clock to make sure the miner dies before he can receive black lung benefits to support his family after he is no longer able to work, is an added burden.

As this Center for Integrity report points out, in recent years, the number of federal Black Lung claims has been increasing, however, the miners’ success rate remains low – about 14 percent at the initial level during 2012 fiscal year. But after appeals progress, the success rate will be much lower. Black Lung benefits are approximately $600 per month and a disabled miner with three or more dependents will receive about $1,250 per month to live on.

John Cline, a VISTA Volunteer, turned clinic worker, turned Black Lung Claimant Attorney, works out of his home in Piney View, West Virginia. In 2006 he agreed to represent Gary Fox, a miner suffering from the complicated form of Black Lung – progressive massive fibrosis. Fox had worked more than 25 years in the coal mine. His health failed and upon examination by a doctor paid for by the Labor Department indicating he had Black Lung, he filed for Black Lung benefits in 1999, but the claim was denied. He represented himself at the legal hearing and the law firm of Jackson Kelly represented the coal company, a subsidiary of A. T. Massey. The Center for Public Integrity during this one year investigation found fewer than one third Black Lung claimants are represented by attorneys.

The most important piece of evidence in Gary Fox’s case for Black Lung benefits was not what was presented as evidence during the hearing but what was left out.

In 1998, a suspicious mass was removed from Fox’s lung to rule out cancer. The hospital pathologist who did not look for Black Lung or even know the patient’s occupation, diagnosed a pseudotumor with “numerous anthracotic (coal) deposits.” However, Jackson-Kelly sent pathology slides of his lung tissue to two pathologists in building their case against Fox, but both wrote reports indicating the mass was likely complicated Black Lung which would have entitled Fox to benefits. The pathologists who wrote these reports were two of the “go-to” doctors for Jackson-Kelly. Instead of accepting their expert opinions allowing Gary to receive Black Lung benefits in the amount of $704.30 per month to take care of himself and his wife, the investigative reporter found that Jackson-Kelly withheld the information. At the time, Fox, the judge and the firm’s own four expert pulmonologists had no idea the reports existed.

Cline had only graduated from law school five years earlier but had seen Jackson-Kelly Law Firm in action for years while working as a lay representative helping miners file Black Lung claims. Cline suspected Jackson-Kelly was withholding key evidence in the Gary Fox case. The law firm was served with a formal written request asking for evidence not turned over. But it took the filing of a discovery motion with Judge Thomas Burke, before Cline received what he was looking for, the reports from the two pathologists indicating the mass likely was complicated Black Lung. Judge Burke agreed with what Cline had been arguing for years that the “employer must provide accurate evidence to its expert witnesses.”

Judge Burke determined Jackson-Kelly’s behavior amounted to “fraud on the court.” Burke reopened Fox’s previous claim and awarded benefits dating back to 1997. The firm also withheld an X-ray reading finding complicated Black Lung a year before the biopsy. Fox and Cline won but only for a moment.

Jackson-Kelly appealed the decision and Fox’s case is still unresolved. A decision in favor of Fox and Cline could change the course of Black Lung litigation. Although the judge deemed Jackson-Kelly’s actions to be a fraudulent scheme that threatened the integrity of the judicial system, a split appeals court vacated that ruling, and the decision is now on pending before the Fourth Circuit Court of Appeals.

After his death, doctors opined that Gary’s breathing problems caused his heart to fail, killing him. When a pathologist performed the autopsy, he saw extensive scarring and dark masses in his lungs.

It was undoubtedly complicated Black Lung. It always had been. 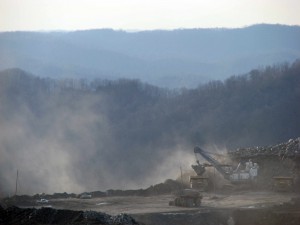