Watch this space for updated points to make your ow comments!

While we encourage that you submit your own comments for greater impact, click here for an easy online way to submit comments, thanks to Appalachian Voices.

Info below is an update to this blog:

As noted there, the Federal Energy Regulatory Commission has released the Atlantic Coast Pipeline Draft Environmental Impact Statement (DEIS) for public comment. Like the Mountain Valley Pipeline, this DEIS is insufficient and lacks the critical information needed to fully evaluate the impacts of the proposed project.

Public meetings on the DEIS are scheduled for March 1 in Elkins, WV and March 2 in Marlinton, WV, with a comment deadline of April 6. Details on those meetings, as well as meetings in other states below.

Comments may be filed either online with FERC www.ferconline.ferc.gov or by mail to:

FERC is supposed to respond to comments received and revise the DEIS to develop the Final Environmental Impact Statement.

FERC will then issue an Order approving or denying the project.

West Virginia Rivers Coalition shares with us this info to help you make your comments. Highlights of major impacts of the Atlantic Coast Pipeline and the related Supply Header Project (SHP):

* 71 miles of vulnerable karst terrain would be crossed.

* 12,030 acres affected by construction, of which 5,976 acres permanently affected by operation.

* 786 wetland acres temporarily affected, of which 248 acres would be permanently affected by operation.

The Schedule for those wishing to provide comments in person on the Draft Environmental Statement is as follows: 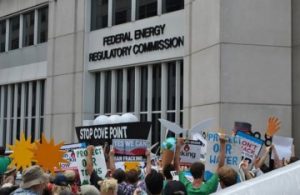