You can listen to a streaming audio replay of the tele-press conference here.

Check out our Reporters’ Resources page for the one-year anniversary here.

Update from Experts, Citizens to Precede “January: A Month of Water”

CHARLESTON, WV — January 9, 2015 is the one-year anniversary of the chemical leak that contaminated the drinking water of nearly a sixth of West Virginia’s population. On Wednesday (January 7), leaders of citizen groups, a water scientist and an impacted mother will hold a phone-based news conference to look back on the crisis and outline the progress, pitfalls and next steps in their work to ensure safe drinking water for all West Virginians.

News event speakers will be:

Can’t participate?:  A streaming audio replay of this news event will be available as of 5 p.m. EST on January 7, 2015 at https://www.ohvec.org.

January 9, 2015 marks the one-year anniversary of the massive chemical leak at Freedom Industries’ tank farm along the Elk River, about a mile and a half upstream from WV American Water’s municipal water intake pipe. Early in the day, a sickening licorice smell began wafting out of water taps and hospitals reported an influx of people with rashes, nausea and other complaints after taking baths or showers. By afternoon, the governor declared a state of emergency and some 300,000 customers of WVAW were told to stop using their water for anything but flushing commodes and putting out fires.

Restaurants, small businesses and government buildings were forced to close. It would be days before some businesses could reopen. Several never did, having gone bankrupt. It took up to nine days before the government declared the water “safe” in homes in the region. But many doubted that declaration, and those who could afford to do so continued to purchase bottled water for months after the “all clear” had been given. Some still refuse to drink the tap water.

After the chemical spill, people mobilized for action and attended educational forums, rallies and meetings, all aimed at holding regulators and politicians accountable. In response to the citizen outcry, the West Virginia Legislature passed Senate Bill 373, which imposes the first-ever regulation of above-ground storage tanks. As the 2015 Legislative Session begins, citizen groups will need to safeguard progress made so far and continue their efforts to advance protections for the state’s drinking water

The chemical leak that contaminated the drinking water of nearly a sixth of the state’s population deeply distressed citizens around the state and nation about the safety of their drinking water. What resulted was a remarkable citizen-led effort to support reforms introduced at the state and federal level to strengthen protections of drinking water supplies. Out of this organizing work emerged the West Virginia Safe Water Roundtable, a coalition involving 28 organizations committed to working together to ensure the availability of clean, safe water to sustain life and a vital economy in West Virginia.  Advocates for a Safe Water System, Ohio Valley Environmental Coalition and the West Virginia Rivers Coalition are among the groups active in the West Virginia Safe Water Roundtable. The groups are working together to promote a series of educational events and rallies for January: A Month of Water.

January: A Month of Water kicks off on January 9 with a series of events, including a candlelight vigil, in and around the State Capitol Grounds, in Charleston, WV. 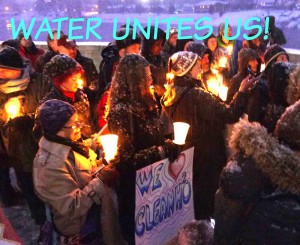