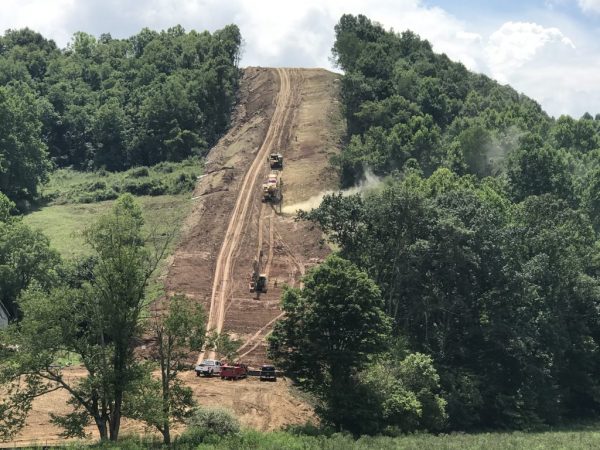 The Awful Marcellus Pipeline Mess: They are Here Already With More Coming Soon

The world in a businessman’s mind only has to duplicate the real world to the extent of making profit. Unfortunately, for society as a whole, a lot of other aspects of the real world are important.

conditioned offices in summer and heated offices in winter and think about how to make a profit, given certain assets, came to me a few days ago. A timber man was telling about his last job. He’d paid to cut and remove a stand of timber, gotten in all the paperwork, satisfied the inspector about his haul roads, and all that, and gotten into the job.

Then a pipeline company had sent a representative through and told him he would have to stop, they were going to clear a right of way for one of the 42-inch pipelines. He quit, and they cut the right of way and piled the trees alongside their clearing. When he was released to go back to it, the timber was worthless. He’d paid for it, the farmer got damages, the pipeline company wouldn’t let him clear the right of way, and to add insult to injury, the standards for their access roads wasn’t near as stringent as for his! 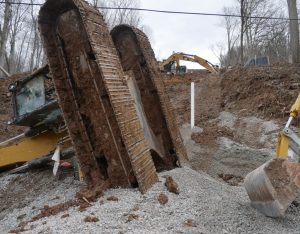 Laying pipelines in country where there are steep grades, rock layers near the surface and karst limestone is not the same as laying pipe in deep soil, in relatively level country. When they have to anchor the backhoe digging the trench by running a cable to a dozer with its blade dug in upslope it’s not only life-threatening for the operators, but beyond restoration. I’ve seen rock-cutting grind wheels on dozers in place of the blade, and seen rock-cutting grind wheels on the arm of backhoes.

Tell me, when they cut a path up a hillside and lift the rock out, how are they going to fill back in? Keep in mind this is on slopes over 30 degrees, sometimes 60 degrees or more. I’ll tell you, they are going to throw back the big rough rock! So there is an underground channel four or more feet wide, perhaps eight feet deep carrying water below the surface. And there will be spots where the pipes’ anti-rust coating on the outside is cut through. The diversion ditches on the uphill side simply dump storm water into the pipeline trench. God help the natives!

If much of the fill in those deep ditches is wood’s soil, it won’t be so hard on the pipes’ anti-rust coating, but will be constantly soft, and a long unsecured section will be inclined to slip out, with or without the pipe. At the bottom the water will come out and enter a natural stream. At this point the question becomes how to avoid sediment if the fill does stay in place. These big pipelines are hundreds of miles long, with hundreds of ups and downs. It is the downs of the surface that have streams to carry off storm water that falls on the surface. This is where the low points in the pipelines occur. A lot of landscape is involved. 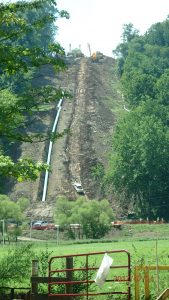 The Rover Pipeline under construction in Doddridge County, WV. Photo by MB.

What about karst landscape? This is limestone, very hard to dig, but full of cracks through which slightly acid surface water sinks. In such places caves form, and collapse to make sinkholes. What will happen in such places where pipelines are laid? They will certainly affect drainage. And may cave in in sections.

These are generalizations easily ignored at the top office. They draw a line on the map where it will be allowed and make the most money. Engineers for the companies that do the work have their work cut out for them. The construction company has to agree to build it where the pipeline company wants it to go, or the pipeline company gets some other company to do the work. Then the engineers have to draw up the plans—or look for another job. Everybody is constrained to least cost. It is cheaper to not look at finer detail.

Then there is the minutia the engineers miss. A recent 36-inch pipe went a few miles west of where I live. Here are two examples of things I observed that the engineers ought to have known better. In one place instead of going to the bottom of a gully, they made a fill and put in a culvert, then laid the pipeline in the fill above the culvert. The watershed above the culvert is not so large the culvert won’t carry the water, but it is wooded. That means there will constantly be small branches washing down to block that culvert. If it isn’t checked several times a year it, it can get blocked and the fill washed so the pipe is exposed or even undercut.

Further south there is a place where that pipeline goes straight down a steep grade for a mile or more. Each of the storm water diversions goes the same distance off the line, so each one adds its load of diverted storm water to what has come from upslope. This will build up a large load tending to make a gulley.

Most folks have no idea of the scale of the pipelines, the compressor stations, the access roads, the rights of way. If you get fracking newsletters it helps.

Some have, lets say, contact with Marcellus Air which takes many, many quality aerial photographs of installations and wells and pipelines in progress. Many include enough of the surroundings to see the neighborhoods, pointing out schools, housing developments, where people are. These newsletters also regularly include photographs showing the pollutant haze that hangs over the Marcellus gas field.

You can go to Google Earth or Apple’s similar application and look for fracking damage in an area. I like the Apple app because the satellite photos are clear summer pictures. If you have it, try “Hurst Hollow Road.” It shows a compressor station in SW Harrison County, WV, with the recent pipeline installation, not yet grassed over. You can follow it miles north to Jarvisville, where there is another pump station, on north to the four lane U.S. Route 50 west of Clarksburg. Here the line becomes less distinct. Reduce the scale and you can see the veins and pimples of fracking in many places on the countryside.

The reply from the big boys who play their profit game from air-conditioned rooms, mentioned above, would be, “Aahh, lots of trees left in the countryside!” But they ignore the fact the trees have a very important job: they provide oxygen and remove pollutants from the air, not the least of them carbon and nitrogen oxides. Each 44 tons of carbon dioxide they remove from the air provides 32 tons of pure oxygen. Twelve tons of carbon is stored in wood and the soil. Twenty five percent of what we humans put into the air is removed by trees now. They do it with free energy from the sun with no cost and no planning and no labor. Over a 50-year lifespan, a tree generates almost $32,000 worth of oxygen, providing $62,000 worth of air pollution control. Pretty good deal!

The Mountain Valley Pipeline will have no odorant. That means leaks cannot be smelled by locals living near it!

Think of the recent big explosion of the new LeachXPress pipeline that occurred near Moundsville, WV, only six months after start up. It had recently had a “pig run,” a device sent through it to inspect it, and wasn’t even up to full operating pressure. The cause was a landslide where the pipeline traverses a steep hill. They lost $437,250 worth of gas. The Follansbee explosion of 2015 is blamed on a landslide, too.

Inspection of welds is a weak spot. Lots of welds, all around the pipe, in a ditch often on steep hillsides, must be very strong to hold natural gas at several tens of times atmospheric pressure.

This construction is useless when the gas is gone. In a few years grass and shrubs cover the pipeline right of way, but they don’t remove as much pollution from the air, and much of that goes back to carbon dioxide soon. It takes 70 years or more for mature trees to come back.

The access roads are covered deeply with crushed rock, as are the well pads. Those will be kept bare a decade or two, and many more decades will be required for establishment of new forest cover.

The pump stations will fall into disuse eventually. Maybe the heavy metal will be extracted for salvage, but the buildings will be abandoned, leaving the neighborhood a mess. The companies will go out of existence before proper reclamation, or they will be excused from reclamation. Like coal and railroads, the litter will dominate the neighborhoods indefinitely.

Enthusiasm wanes with time, as does profit. Investors move on and their gain can’t be tapped against the public loss and private loss, such as spoiled water wells and useless land. Loss of property value to individuals is over looked. Facts are distorted. Legislation is bought and lax enforcement is ignored.

We humans have seen environmental disaster before. But never before with climate change, exploding populations, world wide resource exhaustion, and misinformation on a colossal scale simultaneously. We have widely turned off citizens, too. How will it end? We can only guess, but it doesn’t look like there is any chance of a “soft landing.” 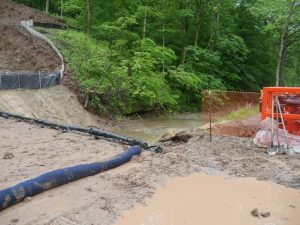