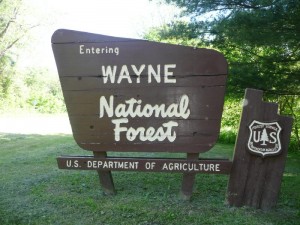 Allied groups* over on the Ohio side of the Ohio River are calling on you to call officials on behalf of the Wayne National Forest. On December 13, the Bureau of Land Management plans to auction off leasing rights to oil and gas companies for 1600 acres in the Wayne, Ohio’s only national forest.

This auction will allow the leasing and fracking of public lands. It comes at a time, when the BLM has canceled 25 disputed oil and gas leases in the White River National Forest in Colorado, and another 15 leases in Montana.

It also comes at a time when our allies have delivered, to BLM’s headqaurters in Washington, D.C.,  more than 92,000 signatures on a petition asking the agency to stop the auction in the Wayne. It allso comes at a time when FreshWater Accountability Project and 26 other organizations (including OVEC) filed a protest letter to oppose BLM’s proposed oil and gas lease auction.

So please make the calls! Here’s what our allies have to say:

As the auction date approaches, still no word from the BLM. We received word from the Forest Service that it is now out of their hands. We also have not heard back from Rob Portman or Sherrod Brown’s offices. So what do we do now? Call them! They need to know that we are here, there are a lot of us, and we are willing to contact them to Save the Wayne! Ask the Forest Service to request the pulling of the parcels. Tell Ohio’s representatives to do the same. And tell the BLM that we do not consent to fracking in the Wayne!

Stand Up to Fracking in the Wayne National Forest

*Some of these allies asking you to make thse call are part of ORCA, the Ohio Rivers Citizens’ Alliance, as is OVEC; if your group works in the Ohio River Basin, considering learning more about ORCA and joining this coalition. Contact Robin Blakeman at robin@ohvec.org or 304-522-0246 for details.

**Groups that signed the protest letter to BLM include:

Stewards of the Land

The Committee for the Youngstown Community Bill of Rights