On May 30, we attended a demonstration in Huntington, WV to raise awareness about police brutality and systemic racism amid nationwide demonstrations in the wake of the murder of George Floyd by Minneapolis police officer Derek Chauvin.

The Letter from Birmingham Jail, an open letter written by Rev. Dr. Martin Luther King Jr. on April 16, 1963, says that people have a moral responsibility to break unjust laws and to take direct action rather than waiting potentially forever for justice to come by other means. In his letter, he writes, “Injustice anywhere is a threat to justice everywhere. We are caught in an inescapable network of mutuality, tied in a single garment of destiny. Whatever affects one directly, affects all indirectly.”

His words provide the foundation for understanding social justice, which, by definition, aims to provide individuals and groups fair treatment and an impartial share of social, environmental and economic benefits. The injustices felt by people in our society are a combination of many unique modes of discrimination; a result of many distinct, yet commingled, aspects of identity that tell the story of marginalized people, whoever or wherever they may be.

As environmentalists, we share in the struggle against social injustice because they are not separate issues. Rather, they are inextricably bound up together—threads in the tangled web we weave. Understood in this way, it becomes clear that it is our responsibility to stand in solidarity with those who are taking action against any form of oppression or discrimination, whether it’s related to race, class, gender, sexuality, ethnicity or any other groups or categories to which people are perceived to belong.

The theories that describe injustice are complex—but the values that guide the way towards ameliorating our condition are not. Mountaineers cannot truly be free until we have actualized the vision of liberty and justice for all. We are all in this together. And the fight for racial, environmental, and labor justice—wherever it takes place—is always our fight as well.

On June 19, we celebrate Juneteenth, the commemoration of a monumental event in our nation’s history: the ending of slavery in the United States.

This Equity and Environmental Justice for All event will highlight the continual fight for racial justice, specifically, environmental injustices in the African American community.

To lay a path to freedom for future generations, The Movement for Black Lives is calling for the sixnineteen mobilization on Juneteenth weekend, June 19–21, 2020. 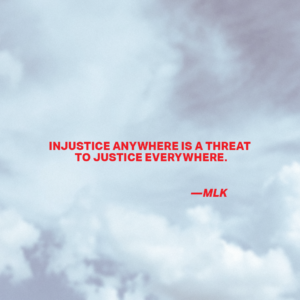