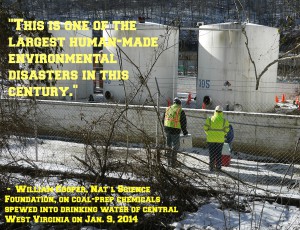 I am sure you remember the 2014 Freedom Industries incident, which ultimately resulted in contamination of the drinking water of 300,000 or so West Virginians. Freedom had allowed a tank containing coal-cleaning chemicals to leak for an extended time period into the Elk River, about half a mile upstream from West Virginia American Water’s intake for nine counties in central WV. The leak went mostly unnoticed, but it finally became so bad that, on January 9, 2014, the government issued a “Do Not Use” order for the water that lasted more than a week in some areas.

Under intense citizen pressure post-disaster, our legislature worked with our DEP to quickly pass the Above Ground Storage Tank bill. Good idea.

But by the next legislative session, dozens of industry groups were exerting pressure on legislators and DEP to roll back many of the provisions of the Above Ground Storage Tank bill. Industry groups wanted the DEP exemptions for its small tanks, its large tanks, and maybe the old tanks, and definitely the new tanks and the harmless ones and even the dangerous ones. Trust us, they said.

Of course one of those many groups was the oil and gas industry guys who also wanted many, or even most, of their tanks to be exempt, because, well, you can trust us. We maintain our tanks and nothing will happen. Except maybe when it does.

Well, on a recent drive out through the rural sections of Wetzel County, I again came across some of these “highly reliable” and to-be-trusted tanks. These are right up there with the “Big League” tanks. Let’s take a look at some of them. Take my word for it, there are a lot more of these tanks around the state. Thousands of them, I would guess.

This tank combo set-up, below, is prominently on display in the Lewis Wetzel Wildlife Management area in Wetzel County. It does not actually inspire much confidence in the oil and gas industry’s conventional well maintenance and operations program, nor does it seems like a swell space for wildlife. 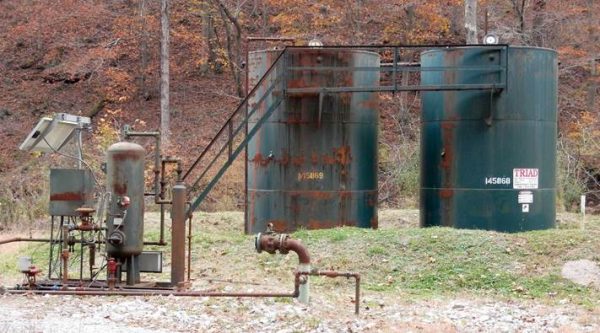 What is not obvious in the above photo is that these two tanks are in a deep valley and a stream flows right behind the tanks only few feet away. Fortunately some dirt is piled up around the tanks. When these leak that dirt might help some. These pre-World War Two tanks are now modernized with the solar panel powered system visible at left.

A close up view of one of these tanks is even more troublesome as seen below—so much for preventative maintenance: 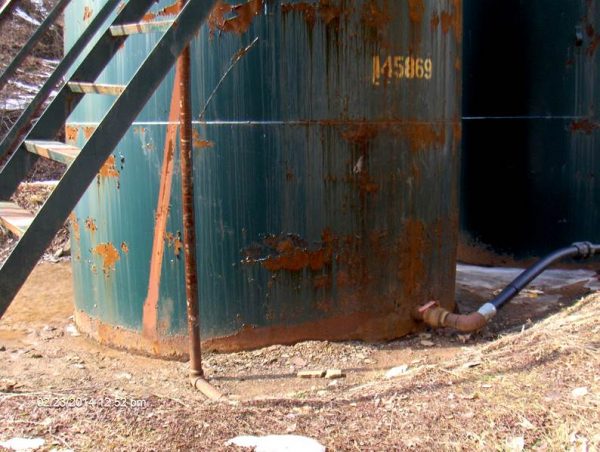 Not too far to the south in Tyler County is this ancient relic (below). Some oil and gas, historical museum is looking for one of these. This would likely be free to whomever wants it. 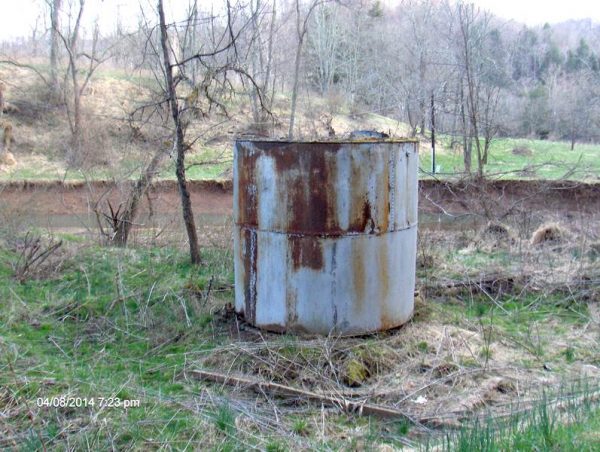 This one, above,has no dirt berm and Indian Creek flows right next to it. That stream is visible in the background and it is a tributary to Middle Island Creek, the water source for the town of Middlebourne. The industry might say that this is just surface rust. That might be true. But on this tank, the inside surface rust seems to be very much in intimate contact with the outside surface rust.

Or here, below, is another example of the vintage tanks of a by-gone (not-completely-gone) era. It is very likely that the lifetime warranty has expired on these tanks. At first glance, it might be reassuring to know that there is no small stream close to these tanks. Here, the Ohio River is within sight. Spills or leaks would not have to travel too far to make it to the river that is the drinking water source for millions of people. 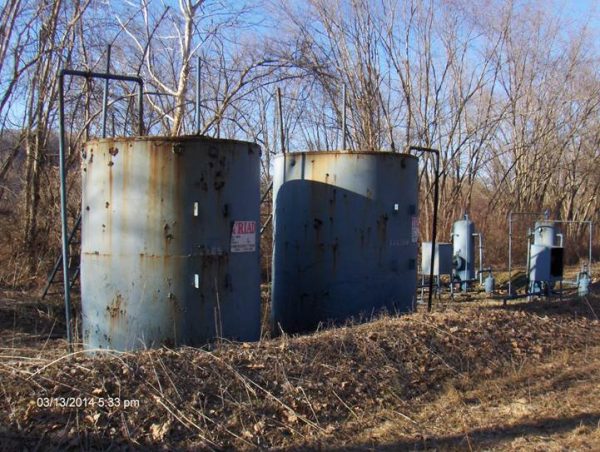 Below are a few more sort of random old tanks which adorn the countryside in turn of the century gas and oil fields near my home in Wetzel County. 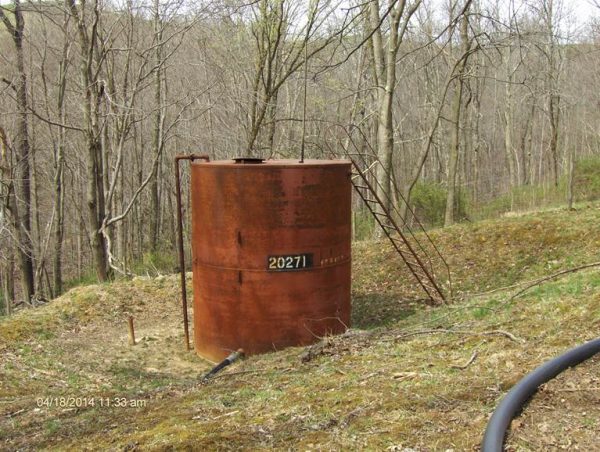 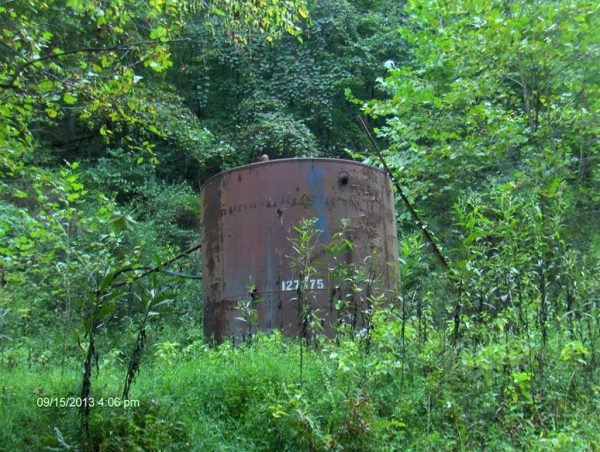 Since some of these tanks shown so far have provided critical storage capacity for oil and other petroleum products for many, many decades, it is understandable that with little or no maintenance for these many decades that some rust might begin to be visible. Very understandable. So it might seem a bit unfair to just point out some of the oldest above ground storage tanks as typical example of potential problems in the gas and oil fields.

One might think that the current state of the art operation and production of the companies now involved with the very new and growing horizontal deep shale gas wells (fracking) that they might be much better managed with vastly improved and maintained well pads and conscientious corporate attention to equipment. Well, maybe not completely. Below are two examples of indicators that we have not made much progress. This tank, below, was only installed a few years ago. It sits on a horizontal well pad. Fairly new, still in use and rapidly deteriorating. 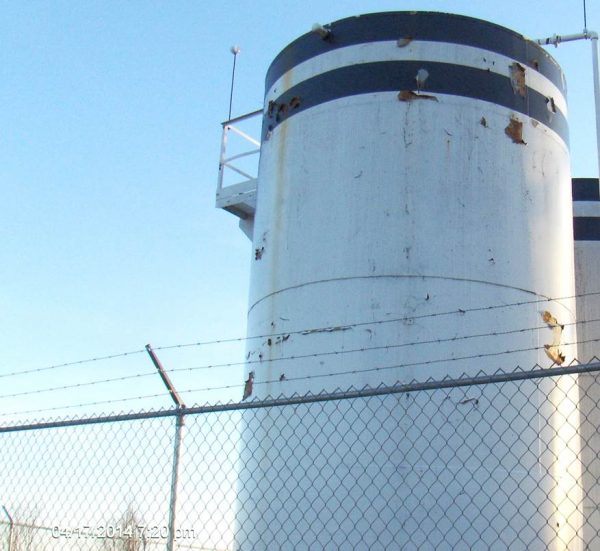 But the very worst case examples of antique tanks are shown below. These tanks should have been scraped for junk steel many decades ago, but were still being used in July of 2014 in Tyler County, during an active deep shale gas drilling and fracturing operation. These old blue tanks were on a horizontal well pad holding various fluids. Most of the fluids were kept in the tanks, most of the time. Some of liquids which leaked out where there was no containment of any type. If these are the best this particular operator could do, we can see why more stringent regulations are needed. Admittedly this still stands as one of the worst examples. It does not represent the best the current shale gas industry can do. But, to do the best costs money, and we far too often see cost-cutting measures by industry—which in the end means heavy costs to clean water and human health. 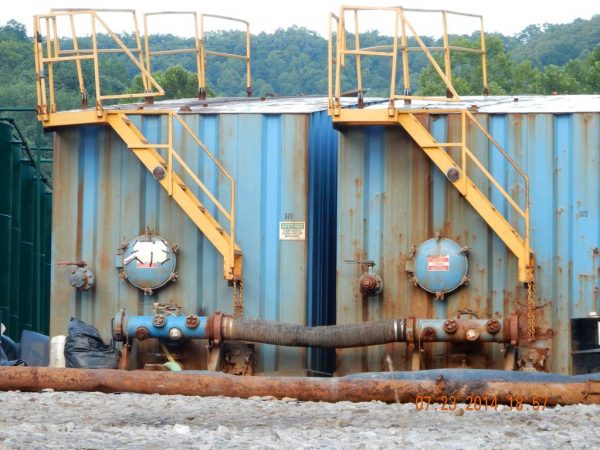 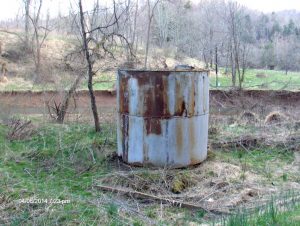