As school children we are taught that our country was founded on the principle that we all are equal:

We hold these truths to be self-evident, that all men are created equal, that they are endowed by their Creator with certain unalienable Rights, that among these are Life, Liberty and the pursuit of Happiness.

*From an op-ed the Charleston Gazette-Mail ran on August 16, “Myth of white supremacy is out in the open,” by Jim McKay, director of Prevent Child Abuse West Virginia.

We are reluctant to acknowledge what Crystal Marie Fleming, Ph.D. tells us in “To Be Clear, White Supremacy Is the Foundation of Our Country…,” and that is that there is another founding principle of our nation, one which we have attained from the get go: white supremacy. The United States was founded on white supremacy.

The rise of Donald Trump has helped to expose that truth for those of us who weren’t aware. Trump’s famous campaign slogan was just a word away from what he and his base really meant. His campaign was one long racist, misogynist, xenophobic, homophobic, mentally ill person’s rant.

But white people voted for him. About 58% of eligible voters voted in the 2016 election. 62% of white men and 52% of white women who voted did so for Trump. (Voter eligibility and disenfranchisement and repression, gerrymandering, as well as abstaining from voting because you are so fed up with the system, those are all a whole ‘nother, totally related topic.)

Given Trump’s career, his campaign, and his assorted policy implementation attempts and rants since his Presidency began, and given America’s history, the aftermath of Charlottesville shouldn’t be that surprising. Nonetheless, count me among the gob-smacked over Charlottesville and Trump’s response. In a jaw-dropping press conference, the President of the United States has openly defended the actions of white nationalists, white supremacists, the KKK, and the torch-bearing Nazi mob that took part in the horrifying, deadly “Unite the Right” events in Charlottesville. There were lots of heavily armed people (see news links below), Nazi symbols, Nazi salutes, Nazi chants, chants of Heil Trump, Confederate flags, assorted “alt-right” symbols, and that torch-bearing mob. At least one black person was beat up by a crowd of stick-wielding white people.

And one white person who was protesting the white supremacists was killed by the actions of someone there taking part in the white supremacist rally. Trump’s given little comfort to the family of Heather Heyer who was murdered, as well as the 19 people who were injured when an apparent neo-Nazi used an ISIS tactic, plowing his car into a crowd of anti-racist protesters. Heather Heyer’s mother has now refused and rebuked Trump.

What happened in Charlottesville and the response from the Racist-in-Chief Trump are a nationwide slap in the face, an alert to the fact that the aspirational values of our nation are in deep peril, while the principle of white supremacy is bloody well alive.

The aftermath of Charlottesville is causing a steady trickle of one-time supporters of Trump to abandon him. (For instance: I Voted for Trump. And I Sorely Regret It.) Despite the too-little, too- late-ness of Trump voters’ regrets, let this Trump exodus become a raging waterfall.

Of course, Trump’s departure won’t end racism, won’t crush white supremacy. Nor will his leaving in and of itself result in an apology for slavery or bring about systematic reparations. It won’t make regular folks feel safe and respected in their own communities. Trump’s leaving won’t even change my white-privileged, cookie-needing, white-guilting, fragile, white-girl-tearing, wanna-be-woke self. That’s up to me.

So much of what is going on in Trump-dom is scary. Donald Trump is in the midst of rolling back all kinds of regulations and protections for the environment (such as dismantling the EPA), health care, immigrants, and so much more. New mean, stupid, dangerous, actions emerge pretty much daily. The way Trump has postured with North Korea, Venezuela, China… Then there’s the Russia issue. And now, Charlottesville.

When Donald Trump goes, and when Mike Pence assumes the presidency, we’ll still be faced with someone intent on rolling back regulations that check corporate greed, someone who is a climate-change-denier, and an EPA-destroyer. We’ll still be faced with a guy with a gleam in his eye for voter repression. Some people apparently voted for Trump because they saw it as a way to get Pence into the White House.

Pence would likely be more capable than Trump of attempting to enact policies that would harm people of color, women, immigrants, health-care seekers, LGBTQ folks, and air-breathers and water-drinkers. Nonetheless, I believe we cannot let such an unhinged person as Trump continue as President of the United States, even though I am appalled at the implications of a Pence Presidency.

More than one person has warned us, as in this opinion piece, “If Trump were impeached and convicted, Vice President Mike Pence, a right-wing, evangelical ideologue, would be a much more reliable and competent rubber stamp for the conservative policy agenda.”

We are in a really dreadful situation. Trump must go! But wait, then we have Pence. But yeah, Trump is totally unstable. He’s gotta go. Yeah, but then we have Pence, and if by some chance the Russia investigations bring Pence down too, then we’d have House Speaker Paul Ryan. 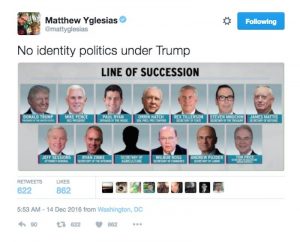 Trump’s office-holding supporters must feel the cost of supporting this person who should be under the care of mental health care professionals. Congress needs to immediately rise above party loyalty and protect the country from Trump. I think that one thing we can do is dog our elected officials to take public stands on the fact that this man is unfit to be president.

If you agree, call your Congressional Representative and Senators and ask them to take a stand and call Trump out by name as a racist, and a person unfit to hold the highest office in the land. Maybe they could lead a charge over the 25th Amendment:

POTUS is showing signs of erratic behavior and mental instability that place the country in grave danger. Time to invoke the 25th Amendment.

As noted in this article:

I’ve called Congressman Mooney, for the fat lot of good that did. I am going to call Senator Capito and do something I rarely do: thank her. Plus, I’ll ask her to come out and publicly say the man is unfit.

At this point, it sure doesn’t seem like Trump’s going to make it for four years in office. Paths to his ouster of Trump include impeachment, Section 4 of the 25th amendment, and his own resignation. Maybe right there on his favorite communication thingie, Twitter, someone can convince @realDonaldTrump that Trump will win BIGLY! if Trump resigns.

All this may be teeth-gnashing in the wind. We need to be prepared for some really crazy sh*t going down. A luta continua. Heed Naomi Klein’s advice:

Naomi Klein: The Worst Is Yet to Come with Trump, So We Must Be Ready for Shock Politics 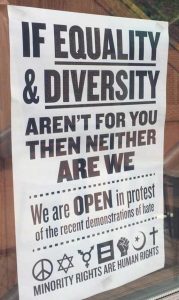