FERC commissioners closed their regularly scheduled May 19 meeting to the public due to “security concerns,” with just 16 hours’ notice. They then held their meeting with members of the press and “invited guests,” some of whom were representatives of the fossil fuel industry FERC is supposed to regulate.

BXE held its previously scheduled rally from 8-10 a.m., calling on FERC to issue No New Permits and to transition to an agency promoting non-polluting renewable energy and efficiency.

After the rally, three members of BXE tried to get into the building that houses FERC, but were turned away by security guards.

They were told that only government employees and invited guests could get into the meeting.
“It’s our understanding,” said BXE member Melinda Tuhus, “that the invited guests from industry were allowed into the meeting and only the public was kept out; that we could’ve pre-registered for the meeting, but of course one would’ve had to know that the meeting was going to be closed to do that, and that fact wasn’t announced until the night before.”

From the FERC webcast, for example, the CEO of So Cal Gas, the director of So Cal Edison and others made a presentation about “preparations for LA basin gas-electric reliability and market impacts.”

BXE held a meeting in front of FERC that was open to the public, where activists spoke about the harms they have suffered from fracked gas infrastructure approved by FERC and climate leaders added their support to BXE’s efforts to stop FERC from issuing new permits.

The Rev. Lennox Yearwood of the HipHop Caucus criticized President Obama, California Gov. Jerry Brown and Canadian Prime Minister Justin Trudeau for claiming to be climate heroes while backing fracking and fracked gas. “They are not climate leaders,” he said, “until they realize we must transition to 100% renewable energy.” After listing several fossil fuel projects that have been defeated through public opposition, Yearwood pointed toward the FERC offices and said, “The folks inside are losing. We are winning — for the next generation.”

Mary Wildfire drove from West Virginia hoping to speak out at the FERC meeting. She told the crowd outside that coal, oil and gas all have climate change in common. “The impacts are already severe. The issue is how are we going to prevent catastrophic climate change.” FERC is “permitting well into the twenty-teens because we don’t want to bother changing our habits.”

Jane Kleeb, founder of Bold Nebraska, which played a critical role in defeating the Keystone XL pipeline, said she is now working with people in other states to fight fossil fuel projects. She said that she and others recently planted sacred corn seeds along the paths of the proposed Atlantic Coast Pipeline and Mountain Valley Pipeline through several mid-Atlantic states. “The seeds of resistance are growing everywhere,” she said. 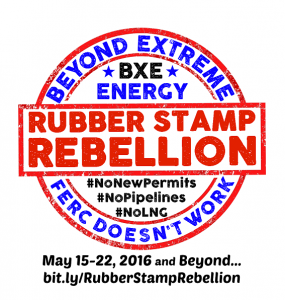