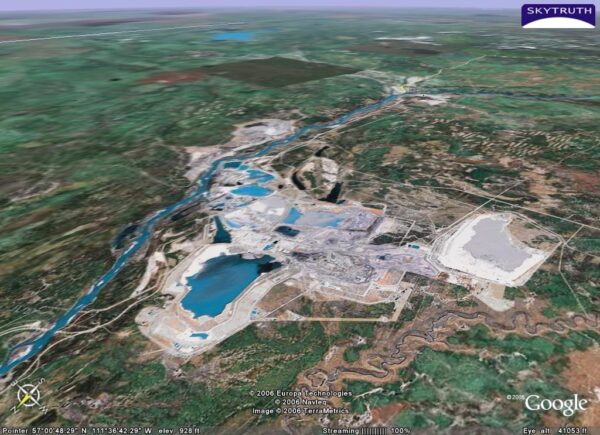 Recently, articles about tar sands oil have appeared in the news mainly because the Biden administration revoked the permit of the Keystone XL Pipeline. The 1700-mile pipeline was first proposed in 2008 and would carry roughly 800,000 barrels of tar sands oil a day from Alberta to the Texas Gulf Coast passing through Montana, South Dakota, Nebraska, Kansas, and Oklahoma.

Keystone XL has been criticized by environmental groups from the U.S. and Canada as well as Native American groups. The pipeline would pollute ecosystems, negatively impact health, and would be a major contributor to climate change. It would also pose a major threat to the Ogallala Aquifer, one of the world’s largest aquifers.

What exactly are “tar sands oils”? They are a mixture of sand, clay, water and a thick tar-like substance called bitumen. The bitumen is made up of hydrocarbon molecules which can be used to make fuels and other petroleum-based products. The world’s largest deposits of tar sands are found in Alberta, Canada near Athabasca, Cold Lake, and Peace River. There are two ways in which the tar-like bitumen can be extracted from the mixture; open-pit mining and in-situ drilling.

In order to do open-pit mining, the forested land must be cleared. Top soil and shale strata are then removed to reach the tar sand, which is excavated to depths up to 300 feet. The sand mixture is thinned out by combining it with large amounts of water, and this slurry is taken to a facility to extract the bitumen. Less than 20 percent of the tar sands reserves can be open-pit mined, which employs massive machines to dig up soil and load it into dump trucks the size of houses. For every barrel of oil produced, four tons of earth are excavated.

In an in-situ drilling operation, multiple wells are drilled and steam is pumped underground to liquify the bitumen for pumping and transport. In-situ mining is less damaging to the environment according to the Canadian Association of Petroleum and 80 percent of the tar sands can be accessed in this manner. But in 2011, in-situ tar sand companies used 370 million cubic meters of fresh water from the Athabasca River alone, more water than the city of Toronto, Canada used that year.

Regardless of the technique used, it takes large quantities of energy to access tar sands oil. Approximately 14-25 percent of the energy obtained from tar sands is lost through processing compared to 4 percent for conventional oil drilling processes.

Like any fossil fuel, tar sands oil destroys air, water, and land, as it is extracted and refined for use. Tar sands oil is thicker, more acidic, and more corrosive than conventional oil. This means that pipelines carrying it are more likely to corrode and leak oil. Since 2010, the original TransCanada Keystone pipeline has leaked over a dozen times and in 2019, spilled 378,000 gallons of tar sands oil in North Dakota. An internal study by TC Energy revealed that pipe stored outside for long periods of time causes anti-corrosion coatings to fail.

Tar sands oil refining produces large quantities of a carbon dense by-product material referred to as petroleum coke or petcoke. In South Chicago, residents are confronted with enormous piles of petcoke created by refineries and stored near their neighborhoods. The wind carries the heavy-metal containing dust into their homes on a daily basis. Most of the petcoke from the U.S. is exported to China as a replacement for coal even though it produces ten percent more carbon dioxide than coal.

Other problems occur when tar sands oil spills out of pipelines as it did on July 2010, when the Enbridge-owned pipeline leaked bitumen into the Kalamazoo River in Michigan. Because the oil contains heavier elements, it sinks to the bottom of water, which makes it more difficult to recover it from the environment.

Tar sands oil is extremely capital intensive and today, many investors are questioning dumping billions into tar sands development when much of the world is turning away from fossil fuels and towards more sustainable, less carbon-intensive fuel sources as a way to address the climate crisis. If we continue to expand this dirty fuel source in Canada and other areas of the world, it is highly likely that the earth will see a 6C rise in average global temperatures rather than the 1.5C suggested by the Paris Climate Accord. The economic and social impacts of 6C will be catastrophic.

Additionally, the removal of millions of acres of boreal forests in Canada will only exacerbate the climate crisis. Indigenous people in the region liken the removal of these forests to “skinning the earth alive.” Photographs of the region testify to the moonscapes left behind after valuable, diverse forests are stripped away.

Rainforest Rescue, a global environmental organization said the Boreal forests of Alberta are home to over 600 plant species and 300 animal species. The Boreal Songbird Initiative warns that continued destruction of these forests will result in massive bird declines and contribute to escalating carbon dioxide emissions. More than 180 million acres of these forests have been destroyed through logging, mining, oil extraction and hydro power.

Some of the pollutants that are released as a result of tar sands mining are naphthalene acids, mercury, arsenic salts, and polyaromatic hydrocarbons. These are found in sediments of watersheds around tar sands and are toxic to invertebrate species. According to a report by Environmental Defense, “The Aamjiwnaang First Nation in Chemical Valley is experiencing disturbing impacts from the pollution as twice as many girls are being born as boys. Moore Township next to the reserve is also experiencing a lower male birth rate, and scientists have found evidence of “feminized” turtles in the St. Clair River that runs through the area.”

The U.S. is planning to invest an estimated 379 billion in Canadian tar sands through the year 2025. We will be fueling the climate crisis with this carbon intensive fuel that generates 3-5 times more emissions than conventional oil. Some refineries of tar sands oil in the Midwestern USA include PBF in Toledo, Ohio and Husky Energy in Lima, Ohio. Husky energy is owned by the Chinese billionaire Li Ka-Shing. In 2019, the plant increased its capacity to refine tar sands oil to 40,000 barrels a day. PBF refinery in Toledo refines 170,000 barrels of oil a day.

The recent announcement by the Biden Administration to revoke the XL pipeline permit has caused an outcry from fossil fuel representatives citing millions of jobs lost. In reality, about 1000 jobs were lost and most were temporary jobs. Consider that Ohio’s Husky Energy completed a merger with  Cenovus Energy early in 2021 that resulted in 2,150 layoffs of tar sands employees, while the Trump administration’s pro-fossil fuel, anti-renewable policies have led to a suppression or loss of 622,000 jobs in the renewable energy sector.

When it comes to tar sands oil, the best stance to take is “keep it in the ground.” 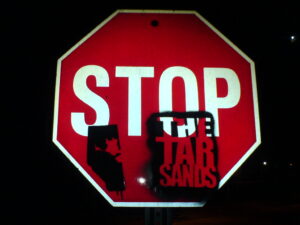