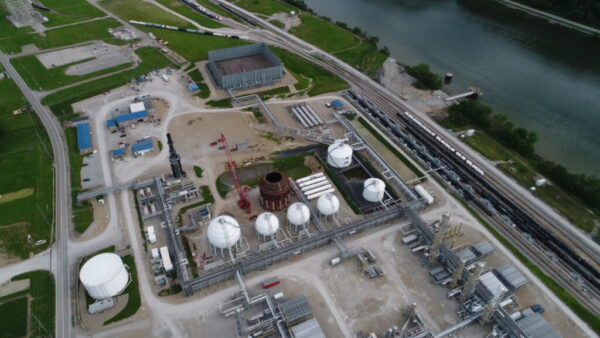 Salt solution from the Mountaineer Storage facility would be piped under the Ohio River to this facility, the Blue Racer Natrium gas processing complex.

“This is a huge win for the autonomy of the Ohio River Valley’s people. We cannot allow companies to walk into our community and store highly explosive and toxic chemicals under our river, our drinking water, without the bare minimum of public comment,” says OVEC’s Alex Cole.

In late September, the Ohio Department of Natural Resources (ODNR) announced that it has cancelled permits it had previously granted to Powhatan Salt Company LLC to drill three solution mining wells into underground salt formations in Monroe County, OH, along the Ohio River.

“This is a resounding victory for clean-water advocates. The public deserves to have a voice, especially on projects that could have a disastrous impact on their health and water quality,” says Megan Hunter, Earthjustice staff attorney.

The wells would be used for Mountaineer NGL Storage to create huge caverns to store fracked gas liquids—ethane, propane, and butane—for use by petrochemical manufacturers, such as the proposed Belmont County (OH) PTT Global Chemical cracker plant. The storage facility would be owned by Mountaineer NGL Storage and would be one critical component of a massive petrochemical buildout proposed for our region.

To construct the caverns, Mountaineer NGL would use the wells to inject millions of gallons of fresh water from the river into the underground salt formation. The company plans to store much of the resulting salt solution on site in a large lake they intend to build on land above Route 7 and the Ohio River. This lake is needed so operators can pump the solution in and out to maintain pressure in the storage cavern under the river. Excess salt water would be moved by a pipeline under the Ohio River to the Natrium processing plant in West Virginia. What could go wrong?

ODNR’s cancellation of the solution mining well permits comes at Powhatan Salt Company’s request, and that is the result of action we took.

In late August, Concerned Ohio River Residents, FreshWater Accountability Project, Buckeye Environmental Network, OVEC, and Sierra Club filed a writ of mandamus before the 10th District Court of Appeals in Franklin County (OH). Earthjustice represented us in this legal action, in which we asked that the appeals court force the ODNR to revoke the permits because the agency had issued them without giving public notice, allowing public comment, or preparing a draft permit, in violation of their own regulations.

In the legal filing, we note that construction and operation of the caverns would create an eyesore along the Ohio River, could lead to spills that would harm private and public water supplies, and could pose an explosive hazard should the facility begin storing fracked gas liquids.

In a September 18 letter to ONDR, Powhatan Salt Company said it was aware of our legal action and that “the filing of the mandamus action has cast uncertainty over ODNR’s issuance of those permits which we believe can most effectively and expeditiously be resolved by our request that ODNR cancel the three permits without prejudice to its consideration of new permit applications for the three wells.”

Now, ODNR and Powhatan Salt Company will have to go through public notice, comment, draft permitting, and fact-sheet preparation in order to receive the permits. And that’s where you come in: Your comments count! Contact CORR on their Facebook page or OVEC at 304-522-0246 or info@ohvec.org to get involved in next steps.

“We are happy to see the permits for these wells cancelled. The site location for Mountaineer is very problematic. It is located on the banks of the Ohio River, threatening the drinking water of five million people. The proposed site is in proximity to coal mines, fracking wells and pipelines, and it is less than a mile away from Clarington and the community’s drinking-water wells,” says Jill Antares Hunkler, member of Concerned Ohio River Residents.

“We will continue to watchdog not only the industry, but also any and all agencies that are supposed to regulate the industry and fail to do so,” says. Teresa Mills, with the Buckeye Environmental Network.

“This unnecessary fracked gas facility shouldn’t have been proposed in the first place, but we’re glad to see that the people most impacted by it will have their chance to weigh in. The scheme to store dangerous ethane underground is one of the fracking industry’s last-ditch efforts to save itself. We shouldn’t be building projects that pollute the air we breathe and the water we drink,” says Shelly Corbin, Ohio Campaign Representative for the Sierra Club’s Beyond Dirty Fuels Campaign. 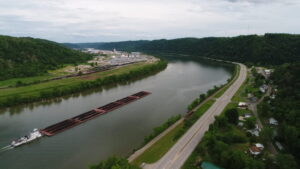