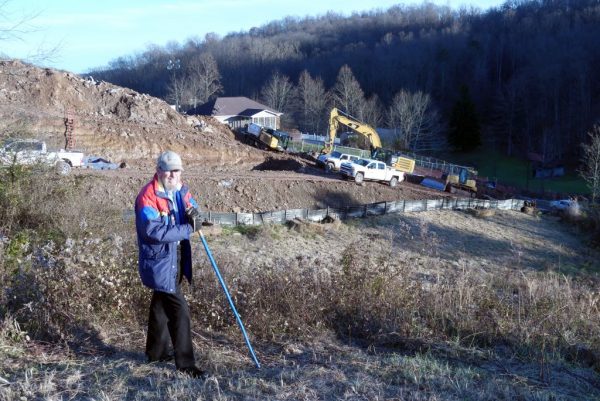 Bill Hughes observing construction of a segment of the Rover Pipeline. Photo by Vivian Stockman.

You can RSVP and invite others to Bill’s memorial service o this Facebook event page.

All who knew Bill or knew of and appreciated his work to educate us all on fracking-related matters  are invited to remember and celebrate his life.

2 – 5 p.m. on Monday, May 27, 2019
at the Lewis Wetzel Family Center on Benjamin Drive in New Martinsville, WV
Bring the family – playground on site

William Joseph (Bill) Hughes, 74, of New Martinsville, went to have a party in heaven on Monday, March 25, 2019. He spent his last days surrounded by the normal chaos of family and friends.

Bill, a lifelong seeker of compassionate justice, was born in Braddock, PA on February 16, 1945 and was preparing to celebrate 50 years of marriage to Marianne (Havrilla) Hughes in December 2019.

He attended St. Fidelis Seminary and became Brother Gregory at Holy Cross Abbey, a Trappist Monastery in Berryville, VA for two years until he realized that Marianne had grown up and had waited for him to come to his senses. They eloped to Arkansas where they served as VISTA Volunteers 1969-1971.

Bill was a Master Electrician and, after moving to Wetzel County in 1977, taught at the Wetzel County Career Center then worked at Conalco/ORMET. He was a graduate of Wheeling Jesuit University and owned and operated Hughes Electric with his son, Greg, before becoming very active with the Ohio Valley Environmental Coalition and FracTracker Alliance, receiving multiple awards and much recognition for his nearly ten years of work in the world of environmental support efforts.

He spent many years coaching his children, Gregory (Bobbie Jo) Hughes and Clare (Bartolo) Cannizzaro in the art of sarcasm and other important life skills. Those are now being passed down to his 10 grandchildren along with his love of flying and pie. Also celebrating his lifetime of wit and wisdom are sisters Catherine Hughes of Sacramento, CA and Jane (Eric) Bean of Columbus, IN, and brothers Paul (Mary Jo) Hughes of Zelienople, PA and Martin (Cheryl Lowenbraun) Hughes of Princeton Junction, NJ and extremely beloved nieces and nephews. Bill was preceded in death by his parents William Francis Hughes and Catherine Fischer Hughes, a sister Mary Elizabeth (Betty) Durick and brother-in-law Ezra (Ed) Durick.

As Bill wished to have a home viewing and burial in a family cemetery on their farm, family and friends are welcome to join the celebration of his life on Wednesday, March 27th, 12-5 PM followed by a Green Burial. A memorial service will be held at a later date.  In lieu of flowers, donations can be sent to the Ohio Valley Environmental Coalition in Bill’s memory. OVEC, PO Box 6753, Huntington, WV 25773         www.OHVEC.org 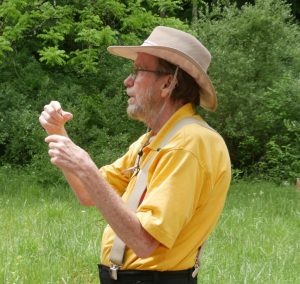