I’m from Fraziers Bottom WV, and I’m proud to say it.

I went to college 30 miles away, due north in Athens Ohio. No one there had ever heard of Fraziers Bottom. So, I played this game.

“I haven’t heard of that, either. What’s the nearest city?” they’d ask.

“I don’t know that, either,” they’d inevitably say.

“Mothman! I’m from just outside the toxic wasteland where Mothman was born.”

See, I come from an interesting place, where the Midwest and Appalachia meet. Where the French and Shawnee helped start the Revolutionary War, where the Germans from the north met the Scotch-Irish from the south, and where the power that runs the country is made.

From my favorite hilltop on the county line, I can see the smokestacks of five of AEP’s largest coal-fired power plants. I can trace the peaks and troughs of the giant hanging extension cords that electrify the far-away cities of the eastern seaboard.

But my home is not in the stereotypical coalfields everyone has in their mind when they hear the name West Virginia. I tell people that the coal was mined out here 100 years ago to power the sternwheelers, and we haven’t missed it.

I come from the land of tu-endie-wei, which refers to the Wyandot phrase meaning “the point between two waters:” the great Kanawha and the mighty Ohio. This is a land I associate with farming, George Washington’s dream capitol of Vandalia, deep fertile farmland cut through with broad meandering rivers, lined on both sides by terraced hills and networked by a maze of hollows and ridge roads.

When in my more nostalgic moods, I still see it that way, neat and orderly in the flats, beautiful and wild in the surrounding hills. Sitting in the old church I grew up in, I look out over generations of familiar names on the leaning headstones in the old graveyard, then inside at people with the same names singing the hymns, then back out at the cattle grazing in the fields in the middle distance, then all the way out to the October red hills beyond.

Other people know where I live as Chemical Valley, and I see it that way, too. Many of the people in that cemetery ended up there with cancer after years of working for Carbide, DOW, FMC, Monsanto, Ambrosia, DuPont, Bayer, ClearOn, or Chemours…  pick your poison, any one of the ever-changing names upriver in Charleston is likely to kill you.

Those names poisoned the river and no one alive remembers a time when it was clean. We can’t eat the fish, the poison has seeped into the groundwater in the bottoms, and now city water is piped in 40 miles, all the way from the Elk—if you can even trust that.

Things like C8 and dioxin are just the punchlines in fatalistic jokes.

The people in Point Pleasant say, “well you know them people in Parkersburg been drinking C8 too long, their babies are coming out with gills,” or people in Winfield say “well you don’t want to go swimming in South Charleston public pool, it is filled with rocket fuel.”

But, it’s not lost on us we all live downstream. In Fraziers Bottom we say, “Well the cancer might get me or I might get smeared by a semi tomorrow going out to my mailbox”—our own version of the proverbial “hit by a bus.”

No matter how hot it got in all my years on this river, I’ve never swam in it. Mom wouldn’t let us. “It’s better than it used to be,” we were always told, “but there’s no telling what’s in it now.”

Old Kenny Wilcoxen loved to tell the story of when he was a kid in the 1940s in the chemical boom years surrounding the war.

“I went down to catch some fish for Sunday dinner and there was the biggest catfish I had ever seen just floppin’ on the shoreline. He had to weigh 80lbs; it was all I could do to pick him up and heave him back in, but he just swam right back up and plopped himself on the beach! I don’t know what was in that water but he didn’t want any part of it! And neither did I, so I decided to go squirrel hunting that day instead.”

My mom told similar stories from when she was a kid in the 1960s. She grew up playing out back of our family store, wedged between the river and Route 35 at the mouth of Stave’s Branch.

Fish kills were common, so she and my uncle would go down on the riverbank and bury all of them in neat rows, a complete fish cemetery with little stick crosses and everything. Partly it was a game, I guess, play funeral you could call it, but mostly they did it so they could play in the backyard the rest of the week without being overwhelmed by the smell.

It’s amazing what we can stand. It’s something I’ve always admired in our people. It is part of the resource’s curse, I guess. Our resilience sometimes works against us. Our foliage grows so fast, sometimes it’s hard to see the deep scars underneath.

I sat down to write this by way of introducing myself as the newest member of the OVEC team. I don’t know if my incoherent ramblings were an appropriate place to start, but I hope you can decipher my point.

I come from a place with deep roots. I have spent my short 30 years studying our history and our ecology in an attempt to understand myself and my people. In my role as community organizer, I hope to continue that education and share what I have learned with as many people as possible.

It’s time to be proud again, and telling stories and teaching the wonders of our mountains are the best ways I know to create fellowship and move forward from here.

I’ve started telling people I am a farmer by choice and activist by necessity. After my short stint in Ohio, I rushed back home and now live in a small solar-powered cabin on my family’s 6th-generation hilltop farm on the border of Putnam and Mason Counties. In debt and broke, like most in my generation, I saw a clear path forward for our communities in a return to our roots in the form of farming and self-sufficiency.

What we have coming at us in the Appalachian Storage Hub is a nightmare, the worst part of our past coming back to haunt us. We must stand up, take root, and fight for our future! 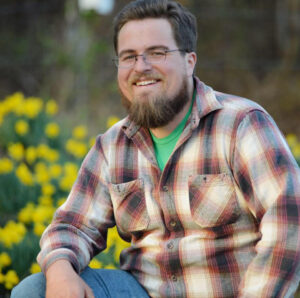