Politicians: Appalachian Storage Hub Cheerleaders
In October, top politicians from three states signed an agreement promising cooperation in securing the cracker complexes for the region that would be necessary to the development of the Appalachian Storage Hub. Then WV Governor Earl Ray Tomblin, Lieutenant Governor of Ohio Mary Taylor, PA Governor Tom Wolf signed the agreement.

According to Steve Hedrick, CEO of South Charleston’s Mid-Atlantic Technology, Research and Innovation Center (MATRIC), this “enables collaboration without fear of too much competition, as the Appalachian Storage Hub would enable a win for Pennsylvania, Ohio and West Virginia—and Kentucky too.”

Over the past few years, industry and political officials from these states have been working to plan and try to find financing for Cancer Alley Two. Senator Manchin (D-WV) says he is urging all of these states to invest more taxpayer dollars to attract the Hub. The Benedum Foundation has primed the pump by providing $100,000 for initial planning of the Hub.

Senators Manchin and Shelley Moore Capito (R-WV), and Rob Portman (R-OH), introduced a bill that would direct federal agencies to study the feasibility of the Appalachian Storage Hub. West Virginia Congressman McKinley plans to introduce similar legislation in the U.S. House.  McKinley said that he’s spoken with President Trump about the Appalachian Storage Hub, and says the Hub fits in well with Trump’s desire for more federal infrastructure investment.

Air Inversions: Toxic Pollution in Our Ohio Valley
The major cluster of petrochemical plants and refineries in southern Louisiana is located in a flat area where the wind blows. The proposed petrochemical hub here in the very narrow Ohio Valley would be surrounded by steep hills that often block the wind. Our region is known to have frequent air inversions where pollution settles in the valleys instead of blowing away more quickly. So we would expect that toxic air pollution would have even more of a health impact, as compared to air pollution in a flat area. It would be hard to think of a worse area for a large concentration of new huge cracker complexes, chemical plants and refineries.

(The sociologist author Arlie Russell Hochshild examines the ways conservatives and Tea Party members in Louisiana justify the severe pollution inherent in living near petrochemical industries in her 2016 book, Strangers in Their Own Land; Anger and Mourning on the American Right.)

It has literally taken millions of dollars to make our lawsuits happen. As large scale fracking was beginning in the U.S., the George W. Bush administration made sure that fracking activities were free from some of the laws that govern other polluting industries, including coal mining. So in addition to money challenges to any potential large legal strategy against fracking activities, citizens and lawyers would also need to contend with weaker laws.

Mountaintop removal continues in West Virginia, and “our” state government continues to grant new permits and push for more new mountaintop removal mines. When you hear fracking proponents say that this unconventional gas production is governed by strictly enforced laws, please know that they are lying.

Appalachian Storage Hub is Not a Done Deal
Don’t take the lies lying down! Please join in our efforts to resist. Contact OVEC today at info@ohvec.org or 304-522-0246. 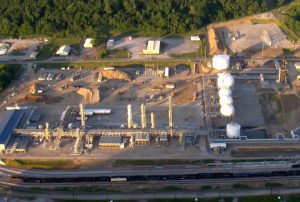