COLUMBUS, OH — Citing serious public health and safety concerns, environmental and community groups opposed to barging of fracking waste sent a letter to the U.S. Coast Guard requesting that the agency immediately initiate investigative action related to GreenHunter, LLC to determine the true contents of waste that GreenHunter, LLC may be transporting by barge on inland waterways, including the Ohio River and the Mississippi River, both, sources of drinking water for millions of people.

For the past two years, GreenHunter, LLC has been seeking U.S. Coast Guard permission to transport fracking waste on the Ohio River or other inland waterways.

The group’s letter references a statement by Kirk Trosclair, COO of GreenHunter to the Wheeling Intelligencer (2/6/15), “GreenHunter Water will continue to transport ‘oilfield waste’ until such time as the Coast Guard ultimately decides on the proper definition of ‘shale gas extraction waste water’ and the rules under which such waste water can be transported. Once these rules are finalized, GreenHunter will comply with these rules and regulations.”

The group reads Trosclair’s statement that GreenHunter ‘will continue to transport’ to mean that the company is actively shipping drilling wastes now, with impunity and without legal authority.”

Currently, fracking waste has too many legal exemptions, trade secrets, and euphemisms associated with it making it difficult to ascertain the precise components of the fracking waste. This in itself makes this situation not your typical shipment for transport down the Ohio River. Obviously, the Coast Guard needs to know exactly what substances are being transported on the waterways so that they can protect the public interest.

“Just the thought of toxic and potentially radioactive unconventional gas well waste being shipped by barge on the Ohio River sickens me” says Robin Blakeman, organizer with the Ohio Valley Environmental Coalition in Huntington, WV. “I, and three generations of my entire immediate family get our tap water from the Huntington, WV intakes. I am appalled that a company like Green Hunter would try to subvert the Coast Guard’s authority and may already be shipping this noxious substance by barge, as well as by truck near the river’s edge. I hope the Coast Guard and the US EPA will do everything in their power to fully investigate Green Hunter’s operations and stop them from any activity which endangers our tap water!”

One only needs to consider the recent events of Charleston and Fayette County, West Virginia and Toledo, Ohio to grasp the enormity of the consequences of losing – even temporarily – a source of drinking water.

We are a coalition of grassroots and nongovernmental organizations which have long and actively opposed the allowance of barge shipments of oil and gas drilling wastes from hydraulic fracturing (fracking) – what the Coast Guard calls “shale gas extraction wastewater,” or SGEWW – on inland waterways.

We filed comments in the Coast Guard rulemaking as directed, via Regulation.gov, and our members include persons imminently threatened with environmental and health hazards by the content of “SGEWW” which may leak or be volatilized or burned if barge shipment is permitted in your district. We are copying US EPA Region IV in Atlanta which has jurisdiction over the Ohio River. Emergency remediation and incident command control measures by the USCG and US EPA would be needed if this SGEWW is allowed to be shipped. No public notice has been given to first responders along the banks of the river that SGEWW shipments would be allowed to commence in order for first responders to be given the requisite training and response equipment to deal with the probable consequences of SGEWW release or ignition.

It is with growing concern that we have witnessed the unfolding controversy in the past three weeks, in which GreenHunter LLC has insisted during investor presentations that the firm has received Coast Guard permission to ship oil and gas drilling wastes via barge on the Ohio and Mississippi river systems. GreenHunter, which has been pursuing permission to ship fracking wastes for more than two years, has departed from its original scheme to add those wastes to the Coast Guard list of legal cargoes, and now insists that Captain Richard Timme has authorized “oilfield wastes” to be river-transported under the terms of Navigation and Inspection Circular 7-87. As you know, Dr. Cynthia Znati of the USCG HQ has publicly denied that SGEWW is a permitted cargo for Ohio River barge shipment, in part, because of the 70,000 comments received that must be reviewed, some that include evidence of the radioactivity in the sludge components which pose risks greater than that of classical “oilfield waste.”

We’re gratified that Dr. Znati’s response to our concerns and news media questions, correctly communicated the meaning of Captain Timme’s correspondence with GreenHunter, and that the agency is still deliberating the question of whether USCG would permit SGEWW to be shipped.

We were therefore surprised when GreenHunter LLC defied the USCG authority over SGEWW shipments by publicly stating its intention to ship these mixed radioactive and toxic chemical sludge wastes.

On February 6, 2015,Kirk Trosclair, COO of GreenHunter, told the Wheeling Intelligencer that, “GreenHunter Water will continue to transport ‘oilfield waste’ until such time as the Coast Guard ultimately decides on the proper definition of ‘shale gas extraction waste water’ and the rules under which such waste water can be transported. Once these rules are finalized, GreenHunter will comply with these rules and regulations.” (http://www.theintelligencer.net/page/content.detail/id/624568/Radiation-Concerns-Coast-Guard.html).

We read Trosclair’s statement that GreenHunter “will continue to transport” to mean that the company is actively shipping drilling wastes now, with impunity and without legal authority. Regulation does not turn on semantic differences, but instead, on physical evidence. In the instance of transporting radioactivity-laced industrial toxins on public waterways, the lack of evidence of the true nature of GreenHunter’s cargoes is of grave concern. Therefore, we ask that the Coast Guard Criminal Investigative Service be asked to examine the contents of the current shipments and the dockside tanks owned by GreenHunter. If these contain SGEWW as we believe they do, we ask the CGCIS to initiate enforcement penalty proceeding or criminal information proceeding in consultation with the Office of the United States Attorney for the Southern District of Ohio.

The Ohio and Mississippi rivers are a source of drinking water for millions of people. A January 2015 Pennsylvania Department of Environmental Protection study of the fracking waste stream in Pennsylvania showed that inadequate traceability and public protections are in place to handle the at-times highly-radioactive fracking emissions and wastes. That study, found here, has prompted reconsideration of Pennsylvania’s weak regulations. Among other findings, fracking waste liquids (SGEWW) contained levels of radioactivity in excess of 26,600 pCi/L. 1 (Copy of pages excerpted from study enclosed). The federal drinking water standard is 5 pCi/L. Leakage of GreenHunter cargoes into river waters in the present circumstances, where the company insists it need not test or characterize its “oilfield wastes” could be catastrophic, and at a minimum, could pose continuing environmental and health hazards which would stress public water supplies and various forms of wildlife.

Given GreenHunter’s impunity in asserting that they will not follow the USCG HQ Hazardous Materials Branch Directive, an immediate cease and desist order should accompany the USCG CGCIS to visit to this shipper’s site and its barges to take evidence of the SGEWW movement that would be admissible in the courts.

Please respond immediately respecting the Coast Guard’s planned response to GreenHunter’s defiance of the USCG authority over SGEWW in current and past barge shipments. Thanking you in advance,

Teresa Mills
2319 Parkridge Court
Grove City, OH 43123
On behalf of the signatories that are provided on the following page.

Southeast Ohio Alliance to Save Our Water
Senecaville, OH 43780

We Are Not Expendable
John Williams
Trumbull County, OH 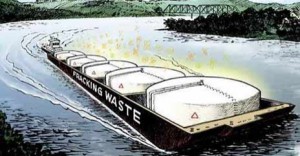