You are cordially invited to a gathering in Monroe County on Wednesday, June 8 at 9 a.m., during which sacred Indian Ponca corn will be planted in resistance to the MVP pipeline. This landmark event will take place at Patricia A. “Cookie” Cole’s Blue Roamin’ Farm, located near the Salt Sulphur Historic District.

The people who formed Bold Nebraska and helped stop the Keystone XL Pipeline are coming to West Virginia to stand in solidarity with local landowners affected by the Atlantic Coast and Mountain Valley Pipelines. They will be planting ‘sacred corn’ seeds along the route of the two pipelines. From June 6 to 8, the group will stop at four locations in Virginia and two in West Virginia.

Jane Kleeb, organizer from Nebraska, and Mekasi Horinek Camp, a native of the Ponca tribe of Oklahoma, are making the journey down to support those in West Virginia who stand against the proposed pipeline projects.

“We’re going to stand together with the cowboys—the ranchers and farmers,” said Camp. “Together our families will plant sacred Ponca corn as seeds of resistance to these risky fracked gas pipelines. As the corn grows it will stand strong for us, to help us protect and keep Mother Earth safe for our children. We stand with the pipeline fighters.”

“Actions, like planting the Ponca corn, show the strength and commitment of people standing up to Big Gas and their reckless pipelines,” said Jane Kleeb, Bold Alliance President. “Using eminent domain for private gain is something the Cowboy and Indian Alliance stands against. We plan on using actions, prayer and all legal tools available to stop these risky pipelines.”

“We are looking at six new, high-pressure, large-diameter gas pipelines running through West Virginia. Not only are they not needed, but they would be disastrous for the region’s water, air, soil, and economy,” says April Keating of Mountain Lakes Preservation Alliance. “We are already seeing landowner rights trampled, property values threatened, and a general disregard for the rights and health of human beings. Methane leakage is contributing hugely to global warming. If these pipelines go in, we will be locked into the same approach we’ve been suffering from for over a century.”

The gathering in Monroe County is to be hosted at Patricia A. “Cookie” Cole’s Blue Roamin’ Farm, near the Salt Sulphur Historic District 4 miles south of Union on US 219 This farm is threatened by the MVP Alternate 210 Route. The mere mention of construction from this intrastate line has already disturbed many in the area, and contributed to a loss of serenity and peace of mind as well as property values.

Cookie is no stranger to fighting big corporations. In the 90s another large infrastructure project, the APCO 765 Kv line was proposed to cross Monroe County including property belonging to her family in the Zenith Valley and Peters Mountain. This project was defeated in Monroe County by people like Cookie who refused to back down from large corporations whose only contribution to the county would have been to leave a large ugly scar through the countryside and over Peters Mountain.

Parking will be available near or adjacent to Cookie’s Blue Roamin’ farm at Junction of Fullen Road and US 219. 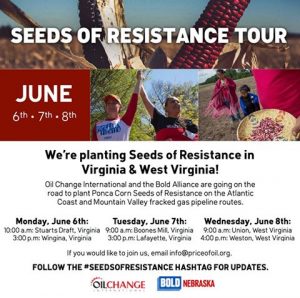