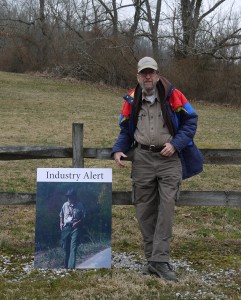 Bill Hughes with a poster about him that oil and gas lobbyists had at the WV State Capitol. Photo by VS.

Memorial Day Gathering:
To REMEMBER and CELEBRATE
the life of Bill Hughes

Bring the family – playground on site

With heavy hearts, the staff and board of OVEC extend our deepest condolences to the family of William Hughes, who died on March 25, 2019. Although we knew medical issues meant that Bill was growing weaker these past few months, the news still comes as a great shock. No doubt OVEC members who knew Bill and his work, along with scores of people whose lives he touched, are deeply saddened.

Bill’s wife Marianne let us know: “He spent the last few weeks perusing all the cards of thoughts and prayers and well wishes from all the environmental community. These were his sustenance.” She extends her sincere thanks to everyone who sent those cards.

“West Virginia has lost an amazing educator and activist and champion of the people. Bill dedicated his retirement years to learning all about fracking-related activities and then sharing his knowledge with his neighbors, regulators, scientists, students, filmmakers, journalists, and activists. Like so many people, I will sorely miss Bill and his sense of humor,” says Vivian Stockman, OVEC’s executive director.

“His humor helped diffuse tense situations,” she adds. Several times, for instance, as we were standing on a public road, taking photos of a fracking well pad or the installation of large-diameter pipelines or some gas-processing facility, almost invariably, a worker from the site would come up and say, ‘Can I help you?” Bill would reply something along the lines of, ‘Yes. My lawn needs mowed.’”

For about a decade, Bill documented the activities of shale gas operators near his home in Wetzel County, West Virginia. An influx of huge vehicles, driven by fellows who apparently had little knowledge of local winding country roads, first alerted him to the fracking invasion and moved him to action. Both Bill and his wife Marianne had grave concerns for the safety of their grandchildren and all children on those roads, once the fracking trucks started taking over.

Bill’s documentation of the fracking invasion included deep research and benefited from his longtime role on the local solid waste authority. He was perhaps the first person to raise the alarm over the huge volumes of fracking-related radioactive waste coming into local landfills not designed for this type of waste.

Bill presented his photos and PowerPoint essays at dozens of events. He hosted scores of ground tours to show firsthand, to anyone interested, assorted fracking-related activities and their impacts on local communities and the environment. He was also keen to show them the solar panels that powered his home.

Bill and Marianne had recently purchased an electric vehicle (EV), and he charged it with those solar panels. He shared his passion for EVs with OVEC Administrative Director Maryanne Graham, who also owns an EV. In their last email exchange, displaying that sense of humor, Bill wrote, “BTW we now have about 2,000 miles on the Chevy Bolt and we still drive right by those gasoline stores. I have been told that they still make people pay for that stuff. How historic is that?”

Bill has left copies of his thousands of photos to both OVEC and the FracTracker Alliance. Many of Bill’s photos and PowerPoints are already housed on OVEC’s website, ohvec.org.

DEP said, “Mr. Hughes exemplifies what it means to be an engaged citizen, and his commitment to environmental protection is an inspiration to many. He dedicates countless hours at great personal expense each year to public education and community involvement.”

“I know Bill has ignited his own passion for justice in many a person he touched,” Vivian says. “I think many will strive to honor his memory and show our gratitude for his work by keeping that passion alive in our own hearts.” 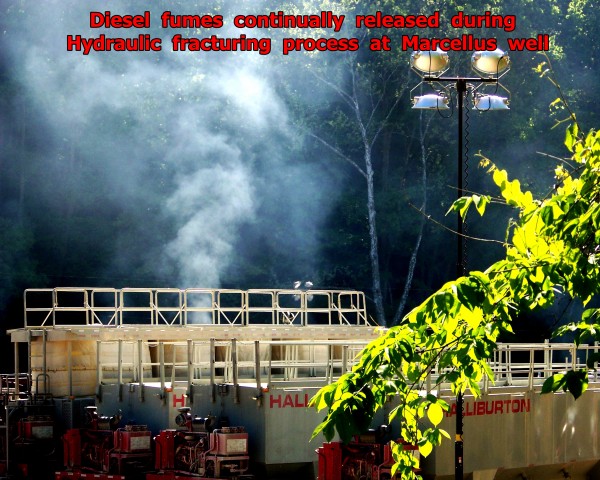 Bill’s extensive collection of photos and his powerful presentations will continue to educate people and underline the urgency for more widespread use of renewable energy . 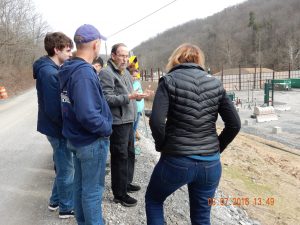