The West Virginia Legislature has been working hard to push a bill that would force mineral owners to give up their property owners rights to oil and gas companies. HB4268 addresses what is known as “co-tenancy,” which allows oil and gas companies to frack minerals without consent if the majority (75 percent) of the heirs within a tract have signed leases with the company.

Co-tenancy is just a clever re-branding of what was known as “forced pooling” in the last legislative cycle. That bill did not pass, so now legislators have attempted a little linguistic detoxification. “Co-tenancy” sounds more benign, more like people working together, rather than being forced to give up their rights.

Now, if you are familiar with West Virginia history, this situation sounds familiar to something called the broad form deed used by the coal industry decades ago. In a broad form deed, a mineral owner would sell their mineral rights and retain the surface rights. However, the fine print stated that the new mineral owner could extract said minerals by any means “necessary or convenient.” People later discovered what that meant was that the mineral owner could trample the surface owners’ rights in order to access the minerals. Eventually, the new mineral owners started kicking people off their land in order to mine coal.

The broad form deed was a crafty document created by lawyers who were paid large sums of money by coal companies. These lawyers counted on the fact that, back in those days, a lot of folks in the hills and hollers weren’t well educated and didn’t quite understand the implications of signing the contract. It was a huge con that stripped people of their property rights for coal company profit. This was how the industry gained control over people’s lives. They owned the mineral rights, and by default the surface rights, and the people had little to no legal standing to fight should something go wrong.

Fast forward to today: coal’s power over the state is waning and oil and gas companies are poised to build their stronghold. The oil and gas corporations are salivating over drilling the deep Marcellus, Utica, and Rogersville Shale formations to frack for methane. They dream of building the “Appalachian Storage Hub” along the Ohio River Valley—a massive petrochemical complex for storing and processing fracked gas liquids.

But the oil and gas industry can no longer count on the majority of people to fall for a con like the broad form deed. Rather than relying heavily on lawyers or using a partition suit to legally access minerals, the companies turn to politicians in Charleston to make laws that allow them to take whatever they want in the cheapest and quickest way possible.

All of this political maneuvering is to strip people of their rights so that these companies can gain a profit. Supporters of the bill from oil and gas companies claim, in some twisted logic, that forcing people to give up their rights will create jobs. They fail to mention that we’ve seen the majority of new oil and gas jobs go to out-of-state people. They fail to mention that this bill will actually create fewer jobs because the number of new well heads will decrease if HB4268 becomes law.

While there are some differences between co-tenancy laws and the broad form deeds, they are very much rooted in the same ideology. Fossil fuel companies want to continue the industries’ resource colony agenda, and they want to  force the people of West Virginia to give up property rights for corporate profit. These companies want power over our lives, by any means necessary.

Our legislative leadership is trading one invasive industry for another, with no true estimate of “Jobs, Job, Jobs” specific to the hiring of hardworking West Virginians. Nor are they looking at the longevity of said jobs, the true costs of said jobs in terms of human health, our roads, and our environment, nor do they consdier a tax structure that supports our future.

Don’t let history keep repeating itself! You can act. Take a stand and make your voice heard. Call your State Senators today and tell them to say no to HB4268.

If you want to do a little more: The bill is headed go to the Senate Energy, Industry and Mining Committee, and then to the Senate Judiciary Committee. We urge you to call and/or email these senators to let your voices be heard! 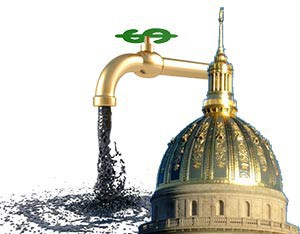