Remember when West Virginia’s small family cemeteries were considered sacred space-where our loved ones could rest in peace in the bosom of the earth? Certainly that was before the outrageous mining process known as mountaintop removal, where small family cemeteries were either destroyed or became an island of green in a moonscape of blasted mountains and obliterated streams, like the Jarrell Family Cemetery below–the tiny green space on a mountain peak surrounded by destruction. Either way, peaceful access to pay homage to one’s ancestors in southern West Virginia has become a thing of the past in some places.

Fortunately, in 2010, OVEC and our faith community partners were successful in passing a cemetery protection bill that helped increase protection and access to these sacred places of family heritage from the ravages of mining gone wild.  Unfortunately, the bill does not extend to protecting these final resting places from harms caused by infrastructure (i.e. pipelines) for oil and gas development. You can read OVEC’s brochure about the regulation passed in 2010 here. 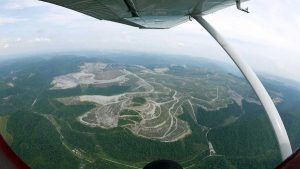 A few days prior to this year’s Memorial Day, I went to Dock’s Creek Cemetery to place flowers and pay my respects to my deceased sister as well as aunts and uncles buried there. Spencer, my lively Welsh Corgi, always looks forward to these visits where we take a leisurely stroll around the cemetery after spending time with my relatives who have died.  What I saw after I parked my car was jaw-dropping.

I noticed a sign beside the roadway that I’d not seen on previous visits. It read in large block letters:  “HELPING OUR NEIGHBORS, Gravel generously provided by: TransCanada and Columbia Pipeline Group.” What the…?! TransCanada is that “swell” corporation that urged the development of the 36 inch, 1,200 mile long Keystone XL pipeline which would transport dirty, climate destructive, polluting tar sands crude oil from Alberta, Canada, to Nebraska where it would hook into existing pipelines heading for Texas for refining (and then export). Columbia Pipeline Group, Inc., which applied for permits to construct the Mountain Xpress Pipeline (MXP) and the Gulf xPress Pipeline (GXP) (expansion projects in the Appalachian Basin), was acquired last year by TransCanada. You can read more about these bad ideas here and here. The short story regarding the MXP  Look out Cabell and Wayne Counties! 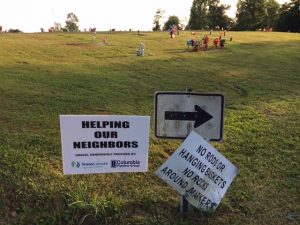 After placing flowers on my family members’ graves, I began to look around for anything that would explain the reason for this sign. As Spencer and I walked our usual route on the cemetery roads, in the distance I spied long rows of orange material where pipelines had either already been installed or would be directly. My heart sank.

Obviously, TransCanada has plans for Dock’s Creek Cemetery of which I (many like me whose loved ones are buried there)  was unaware.

I knew that OVEC’s Robin Blakeman had been working closely on gas development issues, so the next time I was at the OVEC office (I’m retired, but still connected!), I chatted with her about it.  Turns out that the SM80 Loop pipeline (a 30 inch gas line), part of a larger oil and gas infrastructure development project, is planned to go through (WHAT!!) a newer part of the cemetery.  A few days later, I returned to the cemetery to get a closer look at the location.  Fortunately, OVEC has a team of volunteers monitoring base-line water quality during this construction since water quality violations can be part and parcel of this kind of development. 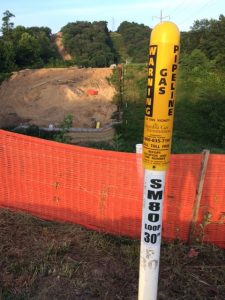 Marker for the SM80 Loop that’s part of the larger oil & gas development in Cabell and Wayne Counties. Photo by Janet Keating

What troubles me most and should gravely (pun intended) concern relatives who have family members buried at this cemetery is not only the fact that this industrial construction is occurring on sacred ground, but over the long-term, a gas leak could lead to an explosion which could either injure/kill cemetery visitors or destroy the graves and remains of loved ones.

Below are two photos by Robin which show how perilously close the SM80 Loop will be to existing graves.

Is nothing sacred anymore? Clearly in West Virginia, as we’ve said previously, “even the dead can’t rest in peace.” 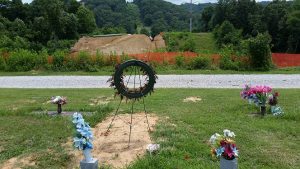 SM 80 Loop’s construction at Dock’s Creek Cemetery in relation to a grave. Photo by Robin Blakeman 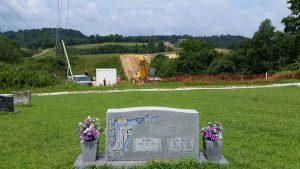 Opposite direction where the SM80 Loop will cross Dock’s Creek Cemetery. Photo by Robin Blakeman