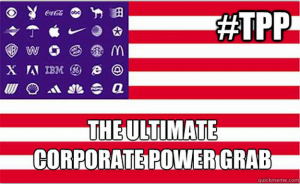 On January 14, I participated in a conference call with Climate Reality Check Coalition on the TTP (Trans Pacific Partnership) and its effect on the environment. This post is to pass along some of what I learned. Like other trade pacts, the TPP would essentially gut our environmental laws.

The call featured two densely informative speeches: one by Lori Wallach of Public Citizen’s Global Tradewatch, and the other by Ilana Solomon of the Sierra Club. Each included links to more information on their websites (see “Resources” below).

Lori talked a lot about the ISDS—the Investor-State Dispute Settlement tribunals which are a feature of both the TPP and TTIP—and NAFTA. The number of suits under these sweetheart systems has proliferated greatly in recent years, and no wonder. Imagine you’re a CEO of a corporation with a series of sweatshops in Vietnam, and the government there decides to raise the minimum wage to a dollar an hour. This is going to cut into your profits! You could sue in a Vietnamese court—and probably lose.

But with the TPP, which includes Vietnam, you can instead file suit through one of these tribunals. You choose a judge from the roster of corporate lawyers who act as judges, Vietnam names another, and the two together choose the third. There are no conflict of interest provisions—the lawyer you named could have worked for your corporation last week, or maybe later, after this case is over. There is no limit to the award the tribunal can give you—and there are no appeals. This trio of corporate lawyers trumps the U.S. Supreme Court. You can demand compensation for all “expected” future profits, profits you expected because you expected they’d never raise the wage. And—even if Vietnam wins and gets to keep its law—the “judges” can order the government to pay all the legal costs of both parties. What a deal, huh?!

Global Tradewatch has a PDF on this, including some specific cases. Warning: do not read this before eating, or trying to sleep or make love. Read it before chopping wood, killing something, or destroying a building, because if you can read this without steam coming out your ears, it probably means you’re dead. Under current agreements, 90,000 corporations have standing to sue the US (they can sue over state or local laws too)—if TPP passes, another 90,000 will be so empowered, including a thousand new oil, coal, gas and nuclear companies. Sometimes you hear that the U.S. has never lost a case. But the WTO ordered us to withdraw the Country of Origin labeling, which Congress obligingly did, and NAFTA provisions led to the US having to stop the dolphin-safe labels on tuna. There are more cases pending, including of course the new lawsuit from TransCanada over the government’s rejection of the proposed Keystone pipeline. Lori thought that one might be settled quickly, if enough of a “shit show” rose up here over it to threaten the whole deal.

The Sierra Club has a good document on this page, called A Dirty Deal. Highlights: the TPP would require the U.S. Department of Energy to automatically approve exports of natural gas to member states. Because it removes tariffs on palm oil, these plantations, blamed for massive deforestation and resulting forest fires, greenhouse gas pollution, and species extinction, would surely expand. This document spells out the details of why the claim that the environment chapter in TPP makes it “a 21st Century agreement” is false—in fact, the environmental provisions of agreements signed under Bush in 2007 were better. But they are never enforced, nor are the labor rights; there is vague language that sounds like it protects the environment, health standards, labor rights—but no teeth, and Lori said there was a footnote in the part about incorporating International Labor Organization provisions that explicitly guts it.

There was some discussion of strategy on the call, including actions on February 4, when Obama and the others are expected to sign this turkey in New Zealand (actually the 3rd here). And we will gear up for the two expected “windows” in which Obama might try to get this through. The first starts in early March, but if he doesn’t think he can get the votes, they’ll wait until the lame duck session after the election. Anyone interested in getting involved, please contact me at wildfire@spectrumz.com. If you missed it, you can read my op-ed on the TPP, which ran in the Charleston Gazette-mail on November 27, here.

Congress: Vote NO on the toxic TPP! 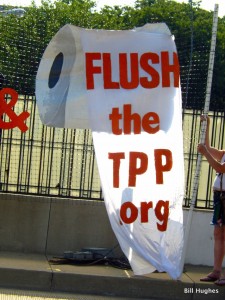